This week…well, I’m sure everyone saw the news. I was planning on covering this arc when the movie came out, but since that doesn’t seem to be happening anytime soon…screw it, let’s read Batgirl #35-40, written by Cameron Stewart and Breden Fletcher, with art by Babs Tarr. You can also check out the main story of Secret Origins #10, written by Stewart and Fletcher with art by Irene Koh. 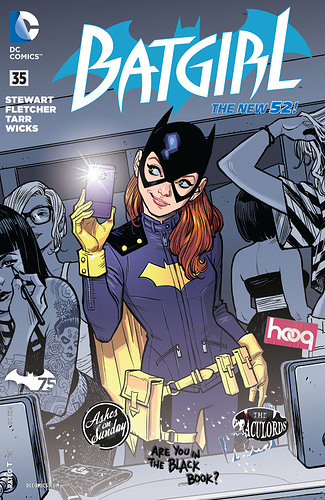 Barbara Gordon’s ready for a fresh start. She’s packing her bags, crossing the bridge and heading to Gotham’s coolest neighborhood, Burnside. And when a freak fire burns up her costume and gear, Babs has the chance to become a whole new Batgirl!

But she barely slips on her new DIY costume before Batgirl start trending as Gotham’s first viral vigilante – and attracting a new wave of enemies who want her social-media spotlight for themselves. Meanwhile, the girl beneath the gear’s got a whole new crew of friends, college classes that are kicking her Bat-butt and a dating scene that can make anyone want to swipe left on life.

This bat’s done living in the shadows. But will the bright lights of Burnside burn her for good?

Looking forward to discussing these issues with you all.

From the description, it seems like the Harley Quinn animated series draws some ideas from this iteration of Batgirl, specifically the social media aspect. I’m curious to read this arc

Yeah, I can see that, especially in the costume and the more exuberant personality that she is allowed to have.

Looking forward to hearing your thoughts.

I wasn’t a fan of this revamp. Gail Simone’s Batgirl run was far more appealing to me, whereas this run’s tone would’ve been more appropriate for an all-out reboot of Babs (which we obviously didn’t get with the New 52, for better or worse).

I like the art from this run quite a bit, particularly when Babs Tarr was working with someone to give her layouts (when she lost a layouts artist, her fight scenes and action was very, very weak). But the writing and the attitudes of the creators tends to really annoy me, sadly.

I wasn’t a fan of this revamp. Gail Simone’s Batgirl run was far more appealing to me, whereas this run’s tone would’ve been more appropriate for an all-out reboot of Babs (which we obviously didn’t get with the New 52, for better or worse).

That’s fair. I also preferred the Simone run, but I definitely enjoyed aspects of the Burnside era as well. It’s funny because Gail has said in the past that she wanted to have more of a mix of light and dark in her run but editorial wouldn’t allow it. I have to imagine that annoyed Gail a little bit when she saw this, like “Oh, I can’t do light stuff, but they can?”

I like the art from this run quite a bit, particularly when Babs Tarr was working with someone to give her layouts (when she lost a layouts artist, her fight scenes and action was very, very weak).

I can see that – Cameron Stewart’s experience in comics did help in making the initial arc pop, but I can also understand them not using him as much, both in terms of letting Babs Tarr get off the training wheels and for the…unfortunate stuff we’d find out about Stewart later.

I mean, the Stewart Me Tooing didn’t happen till long, long after this run was over, so I seriously doubt that played into any decision. I think he just got too busy.

Plus, he always was the one who rubbed me the wrong way the most in his commentary on the series during the run.

That being said, I think Tarr needed training wheels for several more issues.

Fair. I don’t remember much of his commentary. This does remind me that she and Fletcher did end up doing a creator-owned book called Motor Crush. It looks like it’s still on Comixology Unlimited, might give that a read… 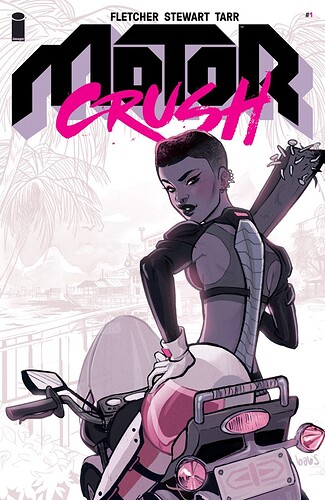 I will say this - I don’t think Fletcher is the most amazing writer, and he very clearly has massive deadline issues, but I really appreciated how all of the titles he was working on - Batgirl, Gotham Academy, and Black Canary - all tie into each other in clever and fun ways. Felt like the old Dixon days, when Birds of Prey, Robin, and Detective Comics would tie into each other. Good times.

There are definitely some good things in this arc, but on the whole it didn’t quite connect with me. Batgirl’s purple and yellow suit is a great look. It was cool when she used her photographic memory and went into detective mode. The ultimate villain was interesting, if a little unbelievable.

The overall aesthetic isn’t exactly my taste, but I can’t deny that it works with the lighter tone. I didn’t like that the much older professor seemed to be so obviously into Barbara or the quip she made about being legal (maybe I’m just a prude). It also felt like Barbara was on her back foot a lot in this story. It seemed strange that the hero of the story was mostly just reacting to stuff instead of taking initiative and driving the story herself.