This week we’re continuing to explore books during the beginning of the New 52 era of DC for it’s ten year anniversary by exploring what might have been one of it’s most controversial decisions of Barbara Gordon returning as Batgirl. For this, we will be looking at the first six issues of Batgirl, written by Gail Simone and drawn by Adrian Syaf. 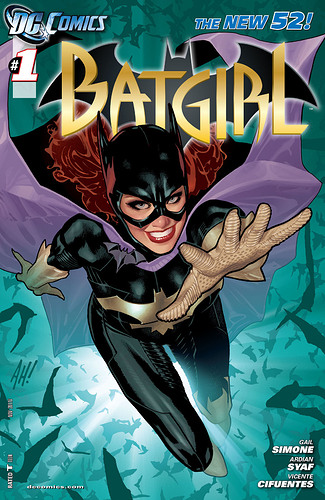 As a part of the acclaimed DC Comics—The New 52 event of September 2011, Barbara Gordon is finally back as Batgirl!

The nightmare-inducing brute known as Mirror is destroying the lives of Gotham City citizens seemingly at random. Will Barbara be able to survive her explosive confrontation with this new villain, as well as facing dark secrets from her past?

Links can be found here:

Really looking forward to discussing this one with you guys.

And if you’re looking for more Bat-related comics to read, check out these books from some of the other great clubs here at DCUI!

At Renegade Robins, they’re continuing to explore Batmanga, as well as Damian’s tenure as “leader” of the Teen Titans during Rebirth!

Over at Harley’s Crew, for the month they’re looking at the first few issues of the Harley Quinn solo title launched during the New 52!

Hey everybody! This year marks the 10th Anniversary of the New 52, so we’re going to take a quick look at the run that changed everything for our lady, Harley:

Conner & Palmiotti’s 2011 series! [image] The entire run is open for discussion, but we’ll mainly be focussed on

We’ve also got another issue of HQAS: The Eat. Bang! Kill. Tour available in our DCUI library. Our discussion can be found …

[image] Greetings @JusticeLeagueBookClub, and a Happy 10th Anniversary to The New 52!

Born in 2011, and debuting immediately after the conclusion of Flashpoint, The New 52 was DC’s biggest reinvention of the core DC Universe since the Post-Crisis on Infinite Earths continuity. With Flashpoint over, and the DC Universe having been reborn anew, some things in the new DCU were similar to what came before (namely, those pertaining to Green Lantern and Batman)…

My controversial take is here!

This series was the best of the Bat-Books in the New 52 launch. In fact, it’s not even close. Gail Simone’s characterization of Barbara is the best version since the Bronze Age. She makes the re-Batgirl-ing of Babs work superbly well, which naturally raises the question of why this wasn’t done twenty years earlier. (After all, Bruce recovered from having his back broken in record time, right?) At the same time, Barbara’s lingering emotional trauma keeps her recovery from feeling too easy. (Contrast Knightquest: The Search.)

I think one of the biggest payoffs of Batgirl (2011) is that Gail Simone was dropping breadcrumbs in each issue. Ranging from her brother to the big bad. I will admit, I didn’t want to see Babs as Batgirl as there was an Oracle shaped hole in my heart but Gail Simone definitely eased me into the world of a physically healed Barbara Gordon. The biggest downfall of this series, and this is more of a complaint of modern comics, is the crossover books didn’t fit the story that was being told every month. To get back to the positive, issue 1 of this series has one of the most iconic covers in the past 10 years.

To paraphrase a character I didn’t like from a movie that I don’t like (minus a few scenes):

“Now this is Batgirl!”

Barbara was my Batgirl growing up, via back issues and trades, so while I love Oracle as much as anyone could, I was very excited to see Babs come back under the cowl in 2011, especially knowing that Gail Simone would be handling her adventures.

I’ll partially agree with @AlexanderKnox in that Batgirl was the best Bat-book of Wave 1 of The New 52 as far as the titles that starred allies of Batman were concerned. No others even came close in my four eyes, and this is coming from a big fan of Nightwing (not only in general, but of his own New 52 solo gig as well).

One aspect of these initial issues that I was also a great fan of was Adam Hughes’ covers. Even if it was just cover art, it was still great to once more be getting something from Hughes on a consistent basis.

I’m also a big fan of The Mirror. It was fun to see Babs take on a new enemy once she was under the cowl again, as opposed to retreading the past and having her antagonist be…Killer Moth, maybe? That could have worked, but having her take on a fresh opponent really lifted up the whole series and made it of the now, as opposed to a modern rehash of the past.

issue 1 of this series has one of the most iconic covers in the past 10 years.

I completely agree. Adam Hughes’ cover was not only a nifty attention-grabber, generally speaking, but it also heralded the return of the original identity of one of the greatest heroines in pop culture history in grand fashion.

I’d say that his cover for Batgirl #1 easily ranks up there with Jim Lee’s cover for Justice League #1 and Chiang’s cover for Wonder Woman #1 in terms of iconic, definitive, New 52 iconography.

I don’t have much to say that hasn’t already been said; this was a really good reboot of a character. Simone did a great job mixing humor seriousness and bringing a unique voice to Batgirl. Mirror was also a great adversary and a nice fit thematically.