Hello and welcome back to the World of Bats, the Batman Book Club!

This week, continuing our theme of exploring the Batman family by exploring the character of Alfred Pennyworth, Batman’s consummate companion, surrogate father figure, and star of a hit STARZ drama (which I’m STILL shook by). To do this, we’ll be reading All-Star Batman #10-14, “The First Ally,” written by Scott Snyder and drawn by Rafael Alberquerque. These issues also have a back-up story called “Killers-In-Law” written by Alberquerque and Rafael Scavone, with art by Sebastian Fiumara. 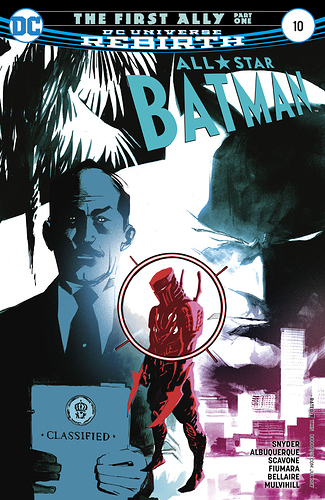 Since he became Gotham City’s guardian, the Batman has faced an army of the deadliest villains the world has ever known. His path has been dangerous, his losses incalculable. But with the help of his right-hand man, Alfred Pennyworth, he’s emerged victorious every time.

But now the Dark Knight is facing a new enemy–the masked face of a conspiracy that spans generations. His name is Nemesis, and both Batman and the mysterious figure called “the First Ally” are on his hit list.

As old foes from the Penguin to Black Mask join the fray, Batman’s quest to uncover the truth will take him from Gotham to Miami to the U.K.–and deep into his own past.

Soon Batman must face an impossible choice: he must sacrifice either the mantle of the Bat, or the man he loves most…

So let us know what you think of this story!

You know how it would go down.

It’s like pulling the string on a Woody doll! “There’s a snake in my boot!”

Haven’t read it since it came out. Have the hard copy of this. I enjoyed the narration overall and how you might think it’s about Bruce minus the setting. Then that blackbeard story just came out of left field leaving a bad taste in my mouth.

tries to think back, is this the story that includes that bit about a young Alfred?

I think it was an interesting take on Alfred – for years there’s always been this nagging thing of “why would this proper man let this child go down the path that Bruce has?” This story gives an interesting explanation: that Alfred went through a similar journey, and understands it as much as he disapproves of it. Part of me wonders if maybe they went a little too far with the metaphor by having him potentially put on a suit himself, but I guess it’s not THAT far off from being a spy.

Outside of that, the art was spectacular: Alberquerque is an incredible artist, both at doing beautiful action and expressive characters.

I also like how the story I think is relatively low stakes. While I like Snyder’s work a little more than others here, I think it’s fair to say that the bigger the stakes are, the more over the top the climax is. Here we have a much more personal story that I think has a really solid conclusion.

It may not be the kind of story that everyone talks about for years to come (for either good or ill), but I think it’s a decent one to stumble across.