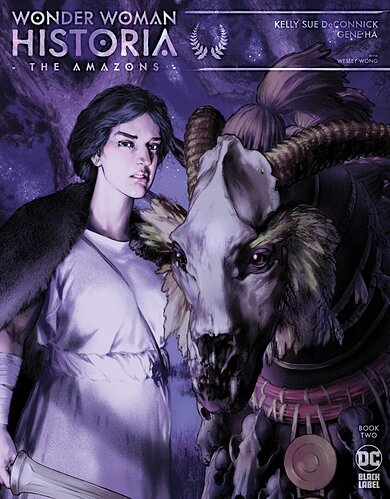 The second installment of the jaw-droppingly ambitious history of the Amazons finds their future queen, Hippolyta, cutting a swath through the world of men, desperate to be reunited with the astonishing women who saved her life…but unfortunately for her, they’re hard folk to find. Perhaps it is the will of the Goddesses that they cross paths again…but before that moment, Hippolyta will gather to herself a tribe of her very own—and find that the hearts of all women do not necessarily burn with a flame as righteous as her own… 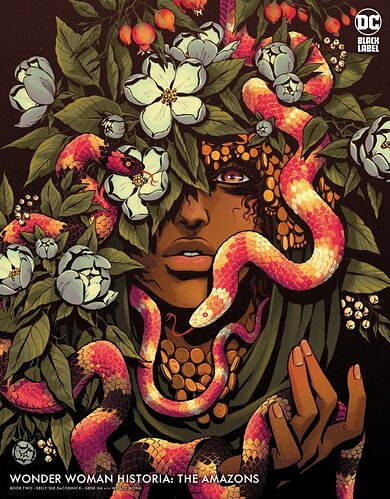 (Variant B) And a link to our Book 1 Discussion, for any newcomers:

The Wonder Squad HERE, or

That Black Label Life HERE. or

Issue one was Phil Jimenez’s magnum opus, essentially, and while it was beautiful, it was also very overwhelming at times, especially at the beginning when it was all the greek gods – or the gods and the “mothers,” as this issue tells us. Of course, this issue was done by Gene Ha and while I don’t think his art will be as gawked at as JImenez’s, it’s equally something to behold and almost works better as comic book sequentials.

The story was also great – it was cool to see this version of Hippolyta who feels very different from previous iterations in terms of backstory, but still keeps to her core. The idea of her creating the seventh tribe of human Amazons and becoming their queen is very compelling. But the story is not without it’s tragedy – what the one little boy does and what the Amazons do for and against him will reign heavily on what’s to come with this book.

Looking forward to seeing what happens next, both in terms of the story and with how Nicola Scott will similarly up her ante in terms of her already gorgeous art.

This issue was just as fascinating and beautiful as the first one. I love this version of how Hippolyta becomes queen. My favorite page: 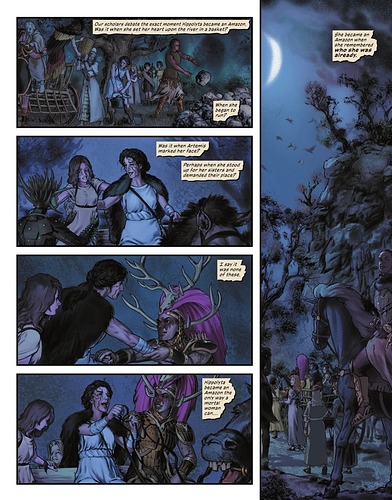 Such a good payoff for Hippolyta finally finding and joining the Amazons. Great messaging in the narrative. And Hera and Artemis watching in the trees! The art is captivating.

My only complaint…we now have to wait until Fall for the next one.

Edit: Forgot to mention this heartfelt dedication to George Perez at the end: 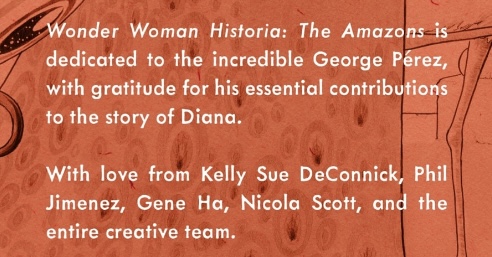 I adore that conversation between Artemis and Hippolyta. I mean geez, that was some wild artist flexing going on there!

Normally, I read comics pretty fast. This is one of the few titles that I take my time, enjoy the ride as I escape to another world. I do wonder when it was decided that Hippolyta would have somewhat of a larger nose than other characters. I noticed this in Paradise Lost, which I read last night. I will say she is completely recognizable across different artists and eras.

Enough of my weird ponderings, the story is being told at a perfect pace. Everything is well-planned. There is a definite cause and effect, I am almost willing to say this is a theme of the story. Ranging from the way the Gods treat the Goddesses to the event that unfolds near the end of the book.

I was happy to see Io! As mentioned in the The Wonder Squadron club room, she is becoming one of my favorite Amazons.

I know this is a DC Black title but I am curious on if this series will be seen as the gold standard for Amazon origins in the main DC line of Wonder books.

I will say she is completely recognizable across different artists and eras.

Something I didn’t realize I knew until you pointed it out! She does have a look, and it seems to me to be something of a actual ancient Greek look. I think they might even be basing her look on Queen Penthesilea who fought in the Trojan War: 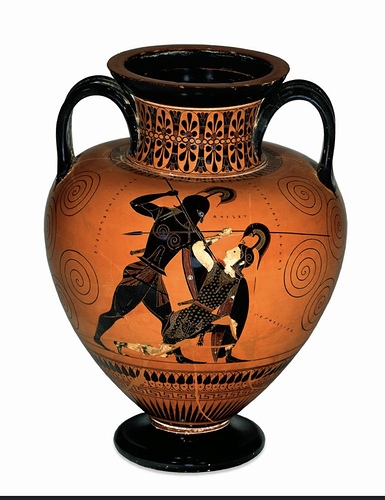 If you look at the writing behind her shield on the right on the wine jar, you will see the same Greek characters on the third page of Historia written on the side of the tomb. (I once spent a year trying to learn ancient Greek and my main benefit is I am able to occasionally puzzle out Greek writing, usually when I run into it in comics). I can’t figure out the rest of the inscription, except of course for “Amazon”.

One thing about Ancient Greek and Latin inscriptions: to save time and energy on chiseling letters into rock, they often abbreviated, which makes tombs very hard to read unless you are very familiar with the languages. I am not, so I am not surprised I cannot figure this out. Side note: Greek used no punctuation and no spaces between letters. soundsprettyannoyingtomenandkindofmakesitdifficulttoreadquickly

Well, as long as I’m on the subject I’ll add my other translations to this post. Please keep in mind I only spent a year learning this stuff 20 years ago. If someone else can figure it out please chime in

The circle around Artemis on page 12 says “Artemis, Hegemon, Thereon, Krateousa, Genethles, which I think means something like: “Artemis, Leader, Wild Beast, Powerful, Born/Giver of Birth”.

The circle around Hippolyta on page 20 says “Hippos e Lelumeue”. I think it says “The horse set free.” My verb endings are extremely rusty but this looks like a form of the verb “to loose” or “to set free.” Little story about this verb: it was the first one I learned in my Greek book. Funny how life brings around these little connections now and again.

The map says “Hanna resnik doidos periklutos” on the sea. I can only make out the last word: “enclosed.” They are using all capital letters here, possibly because it is a map. The tomb was all capitals, but the circles around heads had some words with capital letters and some without. It was kinda confusing, actually. This is not uncommon in comics where a writer or artist is using a language they are unfamiliar with.

There are often errors when a writer/artist uses either characters that look similar but are not (such as with the letter “s” in Greek sometimes looking like “e” in English), or they do what is know as transliteration. This is when they write a word in one language using the characters of another language. (I did this at work as a secret code by writing French words in Greek characters. I have no idea why I did this, but I am certain no one broke my code.

Anyway, it was enjoyable rambling about things based on @D4RK5TARZ comment on Hippolyta’s nose. Maybe at some point I’ll write about the comic but this post is already long enough.

Holy schnikes! My random rambling turned into a lesson that is much appreciated. Now that you mention the possibility of the basis for Hippolyta, it makes so much sense. So now, I will have to go back and look at pre-Crisis Wonder Woman comics to see if that nose was always there or if this is something that happened under the ever-watchful George Perez in post-Crisis.

Furthermore, those translations are outstanding. I wouldn’t even know where to start in deciphering those, nor did I think to.

The circle around Artemis on page 12 says “Artemis, Hegemon, Thereon, Krateousa, Genethles, which I think means something like: “Artemis, Leader, Wild Beast, Powerful, Born/Giver of Birth”.

I know this is in reference to Artemis, the diety, but it could also be directed to Artemis the Amazon, minus maybe the last one “Born/Giver of Birth”. Although, she did come back to life which could be seen as being reborn.

Have I mentioned how much I love this series? The insight seen by other readers has really helped expand on my enjoyment.

Glad you found it interesting! I am glad my Pocket Oxford Classical Greek Dictionary is still useful. I couldn’t bear to get rid of my reference books after the internet was born and they are always happy to be needed again after all these years.

Interesting thanks for the info.

First, just finished reading and this is the soundtrack . Plz enjoy. 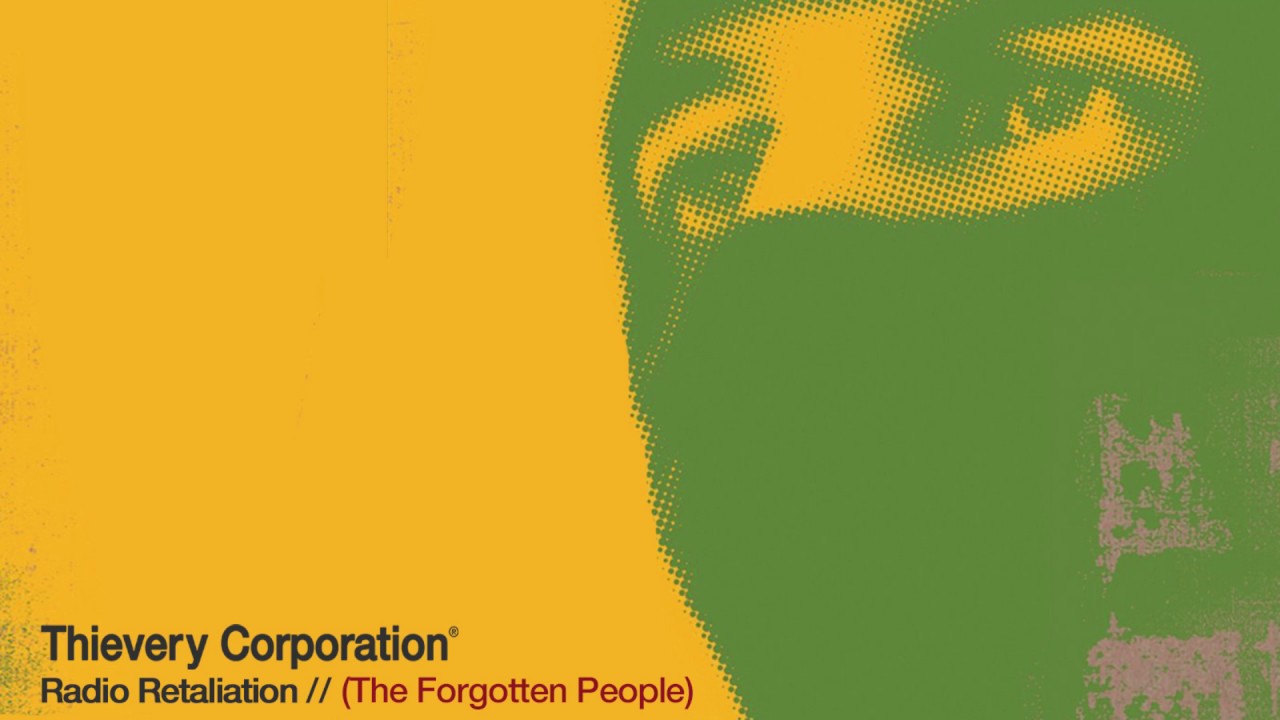 Like the last issue, I ended up slowing way down to read. There was a lot to process/set up in Book 1, but this one was a bit easier, and…it’s gorgeous—everything about it, imo. So far, I’m very impressed w/ this series, to say the least. Really looking forward to the next book. It’s going to be a looong wait. I wish they didn’t delay BL books and keep spacing them out this way, but that’s okay - it’s worth the wait.

I know this is a DC Black title but I am curious on if this series will be seen as the gold standard for Amazon origins in the main DC line of Wonder books.

And thank you for the info @SteveTrevor2.0