The completely new origin for Hippolyta is magnificent.

As is the origin of Diana

The artwork is busy in the opening pages, yes, (so it took me twice as long to get through the early panels since there was so much to look at) but….so pretty. 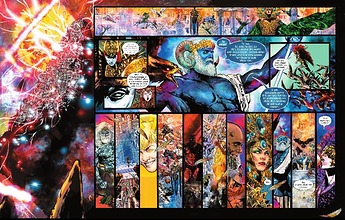 And yes—A LOT of set up, but that was kind of expected. I’m definitely ready for more! Thank you, as always, Kelly Sue DeConnick.

I probably get a little too into analyzing Wonder Woman lore. (@Razzzcat has seen my reading list that I undertook in the past year. Let’s just say…I got into it.

) This is a great conversation that has given me a lot to think about, so thanks for talking to me about this.

I can vouch for your reading list!! Dead Earth is on it - Maybe someday it’ll land here (I asked for it several times myself), but I thought it was pretty great and worth picking up: 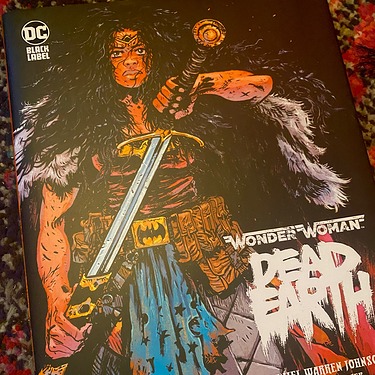 The Other History of the DC Universe did - give voice to marginalized groups through a contemporary lens.

Dead Earth is on it - Maybe someday it’ll land here (I asked for it several times myself), but I thought it was pretty great and worth picking up

I may just go ahead and pick it up anyhow. Those couple of pages @Jay_Kay shared have me wanting to read more.

NGL, when I was at the comic shop earlier today (Tuesday), I looked for WWHA #1 in Recent Releases, thinking that if they had it, then I might snag it.

Conversely, I did find the books I originally went in for, which was most

But…there’s always digital. I know PJ’s art looks very schway on a good size monitor, so I might look into that.

wishes he was stronger-willed and could resist a WW book drawn by Jimenez until it hits DCUI/trade, but he’s not, evidently

I have only read his “Paradise Lost” arc so far. So yes, please no spoilers! I definitely want to read all his WW stuff! Like I said…there’s a list. And I’ve been trying to find some balance across the 80 years of content.

On one hand yeah, but on the other, not. I kind of want to read it in digital more than print, anyway.

I definitely want to read all his WW stuff! Like I said…there’s a list. And I’ve been trying to find some balance across the 80 years of content.

I hope this added some swell reads to your list (and judging by your like of it, I suspect it may have

Hope you guys don’t mind me bumping this thread for something cool. On the Word Balloon podcast/video series this week, there was an episode dedicated to Kelly Sue DeConnick and Phil Jimenez doing their “director’s commentary” on the first half of the first issue, with a lot of cool insight into how the book was made. They talked about coming back sometime in the near future to do the second half. I read this last night. I have barely read a comic in December and November then most of January I wanted to read but felt drained from work. Anywho, yeah, this is such a great read! There are some books that I read once and then think that is cool but will I read it again or will I want the TPB or hardcover of that? Then there is Historia. This is beyond impressive. The artwork is meant to be studied and appreciated. The prose is great but the first half is purely about the artwork. I couldn’t help but think that many of these pages would fit perfectly on a college dorm room wall next to a Dali and Bob Marley poster.

The one thing that I love about comic books is that build and borrow from previous stories. Seeing the first half and noticing the tribute to Perez was a nice touch. Once things felt familiar and safe, everything was thrown on its head. Diving deep into the world of the unknown. I am excited about the second book of this series. I can’t wait to see the familiar world of Wonder Woman flipped upside down as we learn more about Amazonian history.

Just wanted to drop this off: Starts this week!

So I just picked this up at my local comic shop as I was tired of waiting for it to show up on DCUI (and I’m not sure if it ever will since they still don’t have the aforementioned Dead Earth or quite a few other such titles). I thought the entire issue was stunning. I love the density of the artwork and I had to force myself to slow down my normal fast reading pace to really appreciate it. Gorgeous and somewhat surreal, which to me lends a lot more weight to the story.

As mentioned above, there is a definite link to Perez, but I love the addition of each Goddess creating five specific Amazons, as well as seeing so many familiar names: Phillipus, Penthesilea, Antiope, Niobe, Philomela, Pythia, Mnemosyne, Penelope, Iphthime, and Io! (Yeah, I read too many WW comics).

Hera’s powers and role are particularly intriguing. The interactions between the Gods and Goddesses always interest me. I think that is why I love WW so much is my love of classical mythology, and combining ancient myth and modern myth makes this exactly the sort of story I love to read.

Just realized that issue 2 doesn’t come out until April 5th. Well, this will give me a couple of weeks to mull it over, and I have time to watch the videos listed above. When I find a story I really love, I enjoy spending time deep diving about it.

If you don’t mind a recommendation, there’s another Wonder Woman focused project in the Black Label called Wonder Woman: Dead Earth, written and drawn by Daniel Warren Johnson, about Wonder Woman finding herself in a post-apocalyptic world and trying to figure out what happened, how to best protect the last vestiges of humanity, and how her people may have played a role in the destruction of the planet. It’s really interesting seeing Diana’s sense of compassion set against this bleak world, and it’s just gorgeously drawn.

I finally read this! It was very good. Dark as hell, but good. There are a lot of uncomfortable questions Diana has to face for herself and her own people. Some of it was very painful to witness. But I am absolutely glad I read it. (The way Cheetah and Pegasus were incorporated was outstanding.)

Huzzah, and a Themysciran double high five to you!

SN: His run on Superwoman is pretty good. Not WW I know, but a good tenure on a book starring a badass lady (two in fact, as the series begins), all the same.

Good stuff, and that reminds me that I still need to finish Earth One V3. I’m about halfway through, ATM.

With book two on the horizon it will be interesting to see where this goes. Im hoping this does well enough that the writers plans for turning this from a three book to a nine book series comes to fruition.

With book two on the horizon

@nuuninuunani Hello, and welcome! A thread for the new Issue will be published tonight!

Really looking forward to the next book!

Thank you for the warm welcome 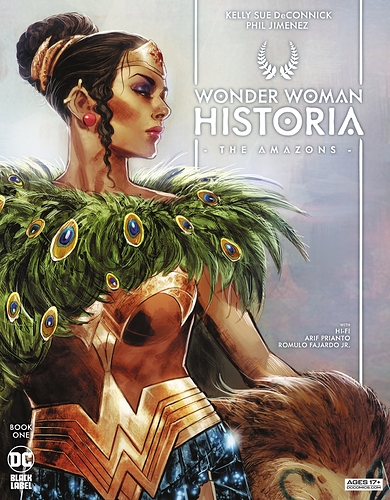