Wonder Woman Finally Has a Girlfriend! 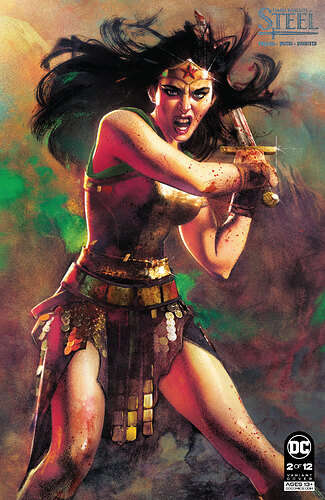 "Dark Knights of Steel" portrays the iconic hero as a medieval warrior and explicitly queer woman.

The one time I decide to wait for the TPB!

This is very exciting! I look forward to reading it.

About damn time! We shouldn’t have to rely on creator interviews and subtext to know that Diana is queer. It should fully come through in the story, and considering it’s been over 5 years since she was confirmed as such, it’s definitely a relief to finally see that happen in an official DC comic. Of course it’s also frustrating that it has to be relegated to an Elseworld, but it’s still something

It is in the story, but they don’t beat you over the head with it. As Greg Rucka said, the concept of being queer would not exist in Diana’s culture. They’re all women on Themyscira - they fall in love and have relationships, that’s it. And she is lucky enough to grow up in a society where prejudice and bigotry do not exist, so she would be oblivious to the fact that her having an ex-girlfriend is a big deal in “Man’s World.”

She’s also in love with Io, the blacksmith, in Rucka’s original WW series.

However, this will be the first time we’re seeing her in an active relationship with a woman (as far as I know), and I couldn’t be happier that it’s happening. It’s definitely progress, even if it’s an Elseworld story. 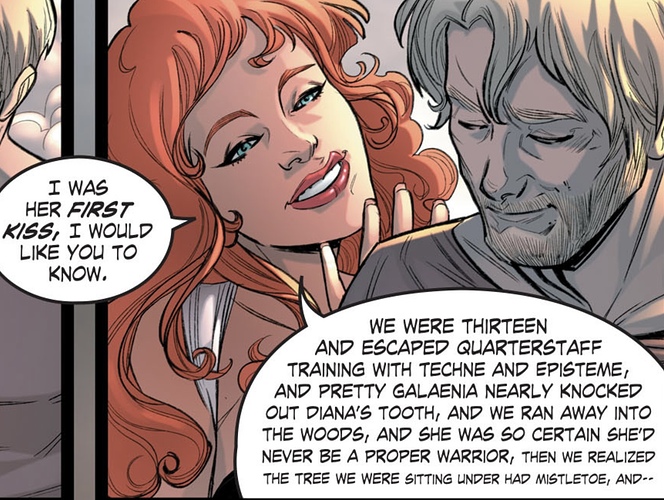 In one of the DC animated movies ( cannot remember which one ), she mentions having a girlfriend, but it was elseworlds also.

That’s cool! It’s a shame that it has to come in through Elseworlds series like this, but it’s also hard because Steve Trevor is such a strong love interest for Diana, especially in recent years.

Neat, and another feather in Dark Knights of Steel’s cap (which will likely be loaded with feathers by the time it finishes).

This series is so good, plus this reveal. I have high hopes for this series. I can’t wait to see what Tom Taylor does. All of this and only the first two issues are out?

But I am so happy for Wonder Woman and I hope this becomes a main canon thing and not just an elseworlds story.

The only movie I can think of in that regard was Red Son. She was definitely very gay in that, though we didn’t actually see her having a girlfriend in any of her scenes (though I’m sure she had several on Themyscira

I read the issue it’s not who you think it is when you read it. god Dark Knights of Steel is great with a lot of twists and angles that are new.

I think that was the case in the Red Son movie, but in the comic she was very explicitly in love with Superman.

Super excited for this! I just hope their relationship isn’t over-sexualized or framed in an explicit manner. Really, all I could ever hope for with queer couples in the DCEU is for their stories to pan out similar to Harlivy’s.

Well, considering Zala is now a child murder, I don’t think this relationship will last long. I hope not anyway as I am tired of seeing Diana support “corrupted/fallen” members of the House of El. In my opinion Diana has her own strengths and morals and wouldn’t blindly support Superman (or girl) in ruthless endeavors as she has been shown to in various Elseworlds, including Injustice. Hopefully, this Diana will stand against misdirected vengeance on a child. If she can help Zala on a path of redemption by the end, great, but intentionally killing a kid (also with no proof his father was even involved in her father’s death) seems like a romantic deal breaker to me.

I feel bad for the people who really loved Wonder Woman over the years for just being a strong, dominating woman who symbolized what a true woman is with a straight relationship. If DC wanted a Bi WW, they could’ve just made a new one and kept Diana Prince straight so that way we’d have two different generations… One WW being the way we loved her with Steve Trevor and a new one being whatever she to be with. I’m a DC fan but I feel they’re losing track of who our OG characters/versions are and are just plainly focused on this new generation, forgetting the current veteran fans or long-time readers. I’m not prejudiced, or hateful towards people, but things are drastically changing and the characters I fell in love with as a kid and growing up with them, I’m not recognizing them anymore and pulling away from comics. It’s sad to say, but I think DC really needs to think of ALL audiences and try to level it out so they don’t lose any more readers. Face it, a lot of readers have been leaving comics behind the past couple of years, and those readers have known these characters forever because the changes are too much.

Yes. Make Yara Flor gay. That way she can knock out the skin color and gay birds with one stone instead of changing a 70 or 80 year old character in a genetic way.

Her being bisexual has been in the comics for years now, as outlined above. And it doesn’t change the fact that she could have a relationship with Steve Trevor. That’s why it’s called bisexual. She likes both.

Lynda Carter has said the queer community has reached out to her saying Diana was an icon for them. Please consider that this character means many things to many people, even if she can’t fit into the tiny box you want to keep her in.

I’ve been reading this! I almost couldn’t believe my eyes!!

(and then I did this for a sec)

Not a bad series so far either.