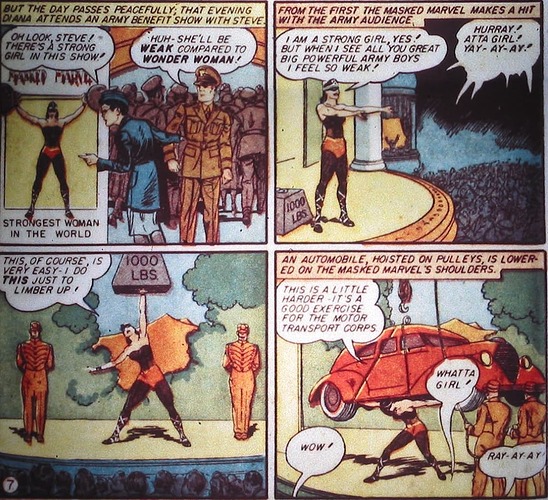 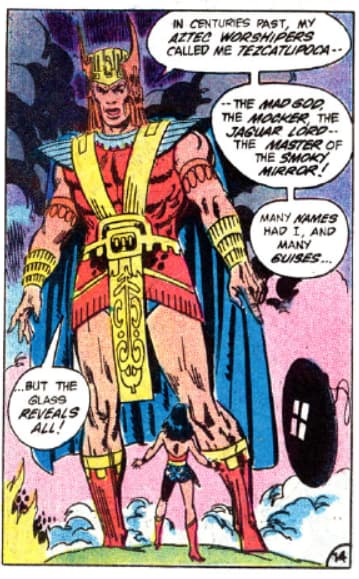 Ah, you mean that god who kidnapped the Amazon Atalanta like he did in the bronze age, Tezcatlipoca? 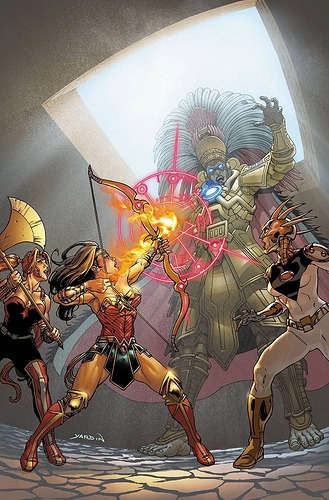 Same character~ Curiously he references the pre crisis continuity and seemingly recalls it.

he references the pre crisis continuity and seemingly recalls it.

I am fine with that. Because he is a god.

Name: King Crystallar
First Appearance: Wonder Woman #26 (1947)
Creators: Joye Hummel and H.G Peter
Abilities: Ruler of the White Star and the Genii people. Possesses ‘atomic crystals’ which will cause the explosion of any atoms which come in contact with them save for those belonging to the Genii who are immune.

Backstory: Ruler of the White Star, a celestial body made from pure atomic crystal which is capable of disintegrating any matter it comes in contact with. King Crystallar was the leader of the Genii, A race native to the crystalline planet who immune to the atomic destroying properties of their world, wickedly desired the chance to destroy the rest of the universe.

So dangerous was white star, that any atomic energy that escaped from it unfiltered was capable of destroying whole planets. A fact which made King Crystallars diabolical nature all the gleeful at the chance. For it was the very nature of the people of the white star of atomic crystal to see the universe destroyed in atomic reaction. 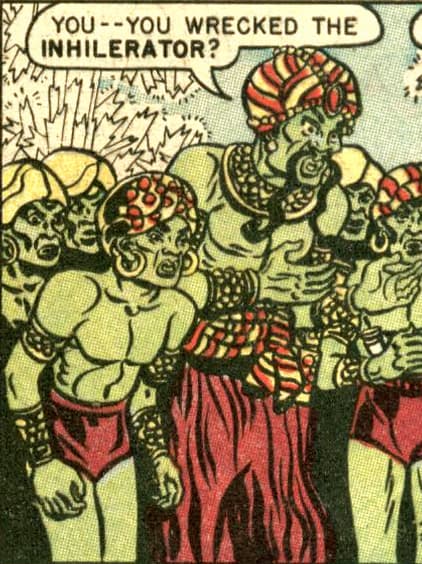 Backstory: Head of the Saturns spy operations on Earth. Mephisto Saturno spent years on the planet. Operating in various guises in multiple countries. Studying the planets strengths and weaknesses for the most efficient way for his homeworld the space empire of Saturn to conquer.

For Saturn was a vast and powerful space empire. Having enslaved its own moons, they plotted to expand, claiming whole planets to place under their thumb. Using it for resources and enslaving whole populations to be resold, for on Saturn the only things that mattered was profit and oneself.

Mephisto would be Saturns primary threat to the Earth. Trying again and again. Losing his status as a count on Saturn for his failure, becoming a prisoner, winning back his freedom, and earning the title of Duke to try again and again.

Along the way what was originally a villain motivated by milking the Earth for profit in the name of self interest turned into one bent on revenge and desired the destruction of the Earth itself.

Backstory: A wild lumberjack found by civilized Canadians and stolen from his native forest habitat to be placed in a traveling carnivals sideshow attractions of grotesque inhuman entities in an effort to sell tickets.

The Lumberjack was a wild and ferocious creature which despising humanity, took up his axe to carve a bloody trail of death in his wake upon his escape, drawing the attention of the Cartel. The premier global assassination organization.

Recognizing the Lumberjack as without contest the greatest assassin of the North American continent, they would invite him into their ranks and teach him to understand basic human speech. (Not that he could utter a word of it himself.)

And thus, the Lumberjack would be pointed at a target and begin chop chop chopping his way until his target and anything in the way was felled. 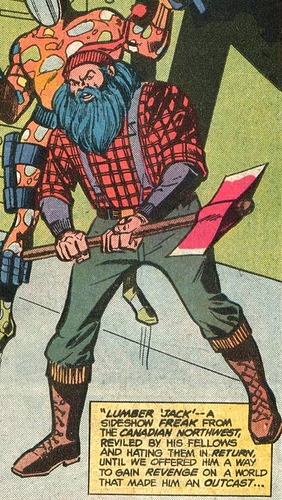