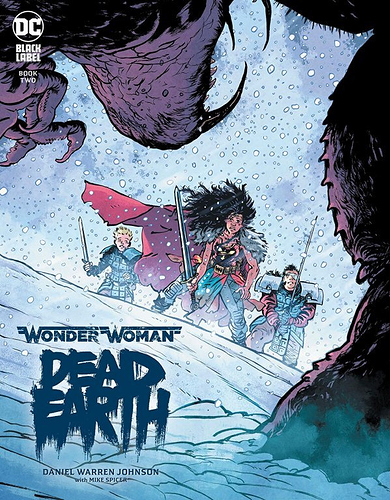 “Determined to give the remnants of humanity refuge on the shores of Themyscira, Wonder Woman’s hopes are dashed when she finds the island paradise a shadow of its former self, with her Amazon sisters long gone and something unimaginable in their place.”

Let us know your thoughts and expectations here!

I don’t even know where to start with this book……

When I collected as a kid I loved Superman! As an adult with a lot of real life experience the infallible hero bothers me. I can’t stand how heroes like Superman stand by doing the “right” thing so fervently that they’d destroy an entire city rather than killing a single Super Villain. Like…how many innocent people die when a single building collapses???

I can see past that with Wonder Woman. She isn’t as much about doing what’s right as much as she is about love and compassion. Boyscouts won’t save the world but if people were more compassionate things would turn around dramatically! I can appreciate Wonder Woman.

I really liked the beginning where it showed Diana’s mother collecting the blood of the Gods to mix with the mud she used to make her…that was cool. I really appreciate background and a look into origins.

Starting with the first book where she was forced into a death match with Cheetah and refused to kill her. That was an awesome demonstration of Wonder Woman’s compassion! We saw it again in Book Two where she offered to let the overthrown leader of the city help lead the people to safety…again…compassion.

A powerful part to the story (it was even printed onto the back of the book) was when they were about to fight the monster and she addresses the people saying “Even if this is your last day, I’ll be with you until the end.” Wonder Woman loves people and stands up for people.

She’s with her mother…

And there’s yet another rash reaction from a human as he cuts her mother’s hands off just after Wonder Woman learns that it was the humans and their bombs that destroyed the world and turned her sisters into monsters.

“I’ve been killing my sisters this whole time to protect the people who did this to them in the first place…My mother was right. You can’t be trusted.”

I am without words.

Was definitely a good read. I think your two quotes fairly sum up the story

“Even if this is your last day, I’ll be with you until the end.” Wonder Woman loves people and stands up for people.

Very Wonder Woman-esque - was not surprised when I saw this. Typical of Wonder Woman leading the charge into battle. Except instead of Amazons . . . it’s the remnants of the human race. No favoritism she sees a need and fills it.

“I’ve been killing my sisters this whole time to protect the people who did this to them in the first place…My mother was right. You can’t be trusted.”

The story is progressing well, and just as we’re about to wrap up chapter two. This happens. This was a double shocker for me. First Wonder Woman was killing her sisters . . . . Then she turns on the remnants of humanity, the ones she just led into battle. It was shocking (again) when she lost her faith in humanity. This is not Wonder Woman (that’s what I’d do, but Not Her).

What in the world is going to happen next issue? Her whole purpose is lost . . .

Love the art in this format. But that scene where one of her loyal followers attempts to protect Wonder Woman by attacking her mother . . .

Didn’t even get a chance to digest what her mom was saying. (The writer and artist were really in tune with each other on all those dramatic moments

) love the coloring, too; and the gratuitous use of onomonopias.

) love the coloring, too; and the gratuitous use of onomonopias.

YES!!!
Daniel Warren Johnsen and Mike Spencer did Murder Falcon together which could very well have taken place in this exact same universe: 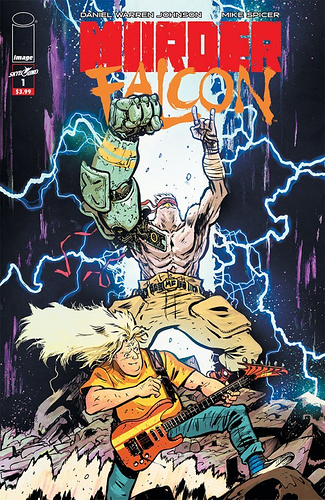 “The world is under attack by monsters, and Jake’s life is falling apart: no band, no girl, no future… until he meets Murder Falcon. He was sent from The Heavy to destroy all evil, but he can’t do it without Jake shredding up a storm. Now, with every chord Jake plays on his guitar, the power of metal fuels Murder Falcon into all-out kung fu fury on those that seek to conquer Earth. It’s time to shred!”

Murder Falcon is one of my favorite comics, so there’s a chance I’m a bit bias when I go on about how much I’m loving Dead Earth but I’m loving it all the same!

The attempt to protect Wonder Woman by attacking her mom was a perfect example of how utterly impulsive humanity is, so I can see how that would be the final straw for Wonder Woman…especially after finding out that not only was it Humanity that destroyed the earth by bombing it over and over and over and over, but also through those repeated bombings they were responsible for the mutations that turned the Amazons into monsters…

We don’t get a lot of deep Comics and when we do we need to enjoy them!

I’m expecting this book to get SUPER deep! Not only are we getting a lot of physical conflict, but it’s looking like we’re going to get a bit of inner conflict and emotional turmoil as we watch Wonder Woman face her level of love through the lens of total devastation and heartbreak!

(This is me being excited!)

Tween you and the guy at the local comic shop, I’ll be checkin out MURDER FALCON soon and EXTREMITY another big praise book from my l.c.s.

You won’t be disapointed!
It was both super fun and very touching at the same time!

Color me intrigued on Murder Falcon. I heard about it and the description I got was something that probably would work better on a TV sitcom: “This teenager leaves his band to join a guy name falcon to murder people, but falcon can only murder people if the teenager plays heavy metal.” Your description sounds more palatable.

But yeah, Wonder Woman, I too, am expecting the final chapter to be Super deep! I was left stunned at the end of #2 and was trying to think Where is she going to go after this? My chapter three would a be a one panel page at the end of chapter two of me avenging my mother and sisters with a really big sword, end of story.

And I’m definitely excited, I have several of her issues over the years, and the only thing I think comes close to this conundrum was when she lost her powers in the late ? 60s.

I just started following Wonder Woman during Year of the Villain.
At first I wanted to shrug the love stuff off as silly nonsense and then I started to notice how hard it was for her to keep up the struggle. That makes her a warrior more than anything; her absolute dedication to her love for humanity…compassion.

This issue pretty much just broke my heart.

I’m not a big follower of her, and I never saw the value of her peace and love approach, and kinda shrugged it off as you say. I’ve only been slightly more into Superman’s always do right ethos. I’m more into the just do the mission damn the costs of Batman’s beliefs. But over the years, you start to see the need for a balance of the . . . . Trinity of the personal drives. And to see Wonder Woman lose her core value, love and hope in humanity . . . There can be no balance with out her. I am still stunned . . . it’s more than just waiting for the next issue . . . It feels like the weight of the world will be decided by what happens next.

It feels like the weight of the world will be decided by what happens next.

Yeah…it does feel that way.

But we’ve only seen a dead Batman. I wonder if Superman will come in and do something significant. He’s the one who always HAS to do the right thing. It was Superman who made me start thinking about the difference between doing what’s right and doing what’s necessary. Rather than just ending a villain he constantly has to keep trying to save the villain no matter how many unseen civilians die while he destroys entire city blocks. It would be nice if he came in with his “do the right thing” nonsense and Wonder Woman tells him to shove it, she’s going to go do what’s necessary!

I wonder if Superman will come in and do something significant.

Damn . . . I was thinking something like that. Remember, when you mentioned this could very well have taken place in the exact same universe [as Murder Falcon], I was thinking this . . . 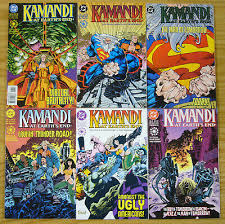 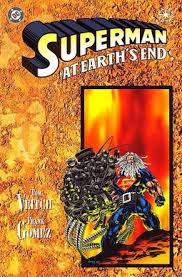 This story reminds me very much of that Kamandi Elseworlds universe. What if Superman showed up (or Kamandi for that matter) and Clark tried to reason with Dianna and they got into that age old argument of whose philosophy was correct. I could see Her saying, ’ You were here, you let it happen.’ Him saying, ‘You left.’ etc. I thought of that universe when Dianna found Bruce laying on the couch.

Batman is dead, Superman is MIA, and Wonder Woman has lost hope.

And that stunned effect from the end of #2 still lingers. 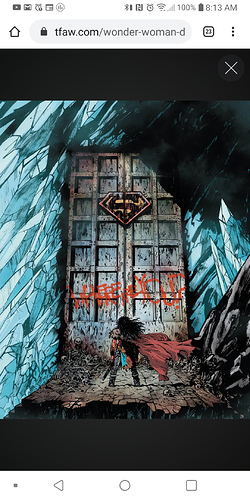 Screenshot_20200228-0813131080×2160 1.45 MB
…it gets me excited for what you and I were talking about as far as Superman making an appearance and then it made me think the commentnfrom @keylimetyrant about graffiti speaking volumes…

That is so cool, how we were just talking about this. I’m suddenly seeing a dying Kal El give Dianna a deathbed pep talk as she goes on to save humanity.

This is the same creative team as Murder Flacon and while Murder Falcon was an action packed and exciting book full of ultra violence, it was also a very tragic story!

I’m beginning to expect that this story is going to end tragically.

We’ve come to expect Happy Endings, but seeing that this is a Black Label book called “Dead Earth” that is written by a team known for tragic endings, I’m expecting to have my heart broken in the most magnificent way possible!

I’m expecting to have my heart broken in the most magnificent way possible!

They already got me in #2. They’re going to have to be pretty over the top to make the ending more tragic than they’ve already done so far. They killed love, kindness, and Hope. But despite all evidence to the contrary, I think Dianna; ney, Wonder Woman will restore peace, love, and hope to her Dead Earth.

( . . . . And her mom will grow her arms back, her sisters will come home, the Amazons will be cured by the Purple Healing Ray, they’ll go out to be ambassadors of Themyscira, rebuild man’s world into woman’s world and there won’t be anymore war, disease, or poverty ever again.) [Guess that’s expecting a little too much of a Happy Ending

. . . . And her mom will grow her arms back, her sisters will come home, the Amazons will be cured by the Purple Healing Ray , they’ll go out to be ambassadors of Themyscira, rebuild man’s world into woman’s world and there won’t be anymore war, disease, or poverty ever again.