Warner Bros. Animation has released a synopsis and clip for the animated Wonder Woman: Bloodlines.

The synopsis for the animated feature film indicates that it is a prequel to the events of 2014’s Justice League: War. It reads as follows:

“When Amazon princess Diana of Themyscira chooses to save fighter pilot Steve Trevor, it’s a choice that will change her world and ours. Fulfilling the role of both ambassador as well as protector, Diana earns the name Wonder Woman from the gracious people of Earth. But her heart is as strong as her will as she is determined to help a troubled and embittered young girl whom has fallen in with a deadly organization known only as Villainy, Inc! Get ready for an exciting adventure packed with brutal battles, myth and wonder!”

With that synopsis in mind, it is possible that the troubled and embittered young girl that is being referenced will be Diana’s apprentice, Donna Troy/Wonder Girl. It has previously been confirmed that she does exist in the current continuity of the DC Animated Movie Universe following 2017’s Teen Titans: Judas Contract. She has not been seen in subsequent installments though.

The clip that came with this synopsis furthers adds to the fact that it is a prequel. It showcases fighter pilot and Wonder Woman love interest Steve Trevor engaging in a dogfight with parademons and being rescued by Diana.

The release date for Wonder Woman: Bloodlines does not have a release date, but it is scheduled to premiere sometime by the end of the year. It is the second standalone animated Wonder Woman film since 2009’s Wonder Woman. 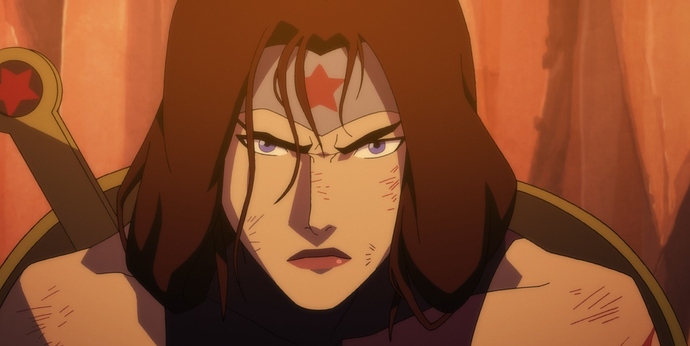 She’s on the cover art and that synopsis sounds really similar to the Rebirth story (which is what the costumes in the movie resemble).

Although, I’d love to see more of Donna Troy. She hasn’t, as far as I know, even been mentioned since her cameo.

I’m irritated that they’re doing the origin story yet again, but the rest of the story sounds potentially interesting.

I don’t know that this is going to be another origin.

I got the feeling this is a cold open intended to introduce us to Steve Trevor and remind us how he and Diana first met.

I don’t think it’s an origin, the clip says " x years ago" so I’m guessing it’s a flashback

This could be not unlike a Year One. Plus, if Jeffrey Donovan is who i think he is…

From what i remember from War, she and Steve knew each other as he was looking all over town for her for some meeting. And there was ice cream.

Michael “Star Trek’s Worf and Steel on STAS” Dorn as Ferdinand is inspired casting. This movie will likely be another great credit in his DC output.

Seriously juiced with excitement for this flick.

I can’t wait for this! I wish she would ditch the costume they’ve been using for the in-continuity movies and give us something more similar to the movie and Rebirth.

There’s a screenshot from SDCC with her rocking the Rebirth suit, @stuartbeausire1985.4882

Another speculation: this teaser could be a misdirect in that it is not footage from the movie.