It’s October and that can only mean one thing, everybody! 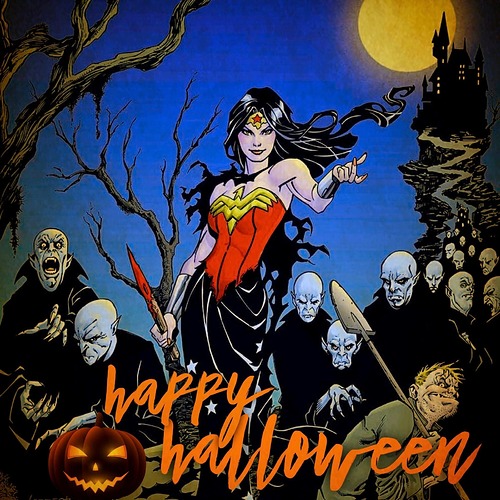 We’ve got a mixed bag of trick and treats (and ghouls and cults) for you to choose from this month—read one, read them all, the choice is yours!

Discussion begins: As soon as you‘re ready! Did you enjoy it? Have you read it before? What did you think of the dialogue, plot or artwork? Anything at all about the reading you’d like to discuss—drop your thoughts below when you’re ready.

Some supplemental reading in the library 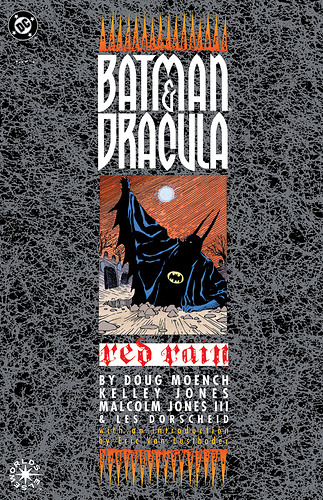 In this Elseworlds tale the Dark Knight Detective matches wits and brawn against one of the most dangerous adversaries in literature. A plague of the undead...

Also, if you’d like to see (or make) some artwork for DC vs. Vampires, stop by to see what our friends DC Fan Art Club are up to this month right​

[Oct2022 Banner] Hi @DCFanArtClub and welcome to the spookiest (and best!) month of the year! Last month we had 3 topics around movies and animation, but this month it’s all comics with 2 new series and one blast from the past (or risen from the grave). [DCVampLogo] DC vs Vampires has 5 issues so far on DCUI (with issue six due in a few weeks). After the first issue you can tell this is an alternate universe/Elseworlds/Black Label type of tale which really makes things more suspenseful. …

And! 🕵🏻‍♀️ If you like scavenger hunts, come check this out!

I have to say that Convergence cover is one of my favorites. Diana is absolutely seething like “Okay, now it’s my turn” and things are about to get real!

“Okay, now it’s my turn” and things are about to get real!

Makes me think of this…

Wonder Woman: Convergence is one of my favorite short WW stories, so this was a great excuse to reread it. Just a few thoughts on it:

I’ll be back when I’ve caught up with some of the other readings!

Agree. This is just a great Wonder Woman story. And I love the atmosphere it has. Even with the way it ends.

I forgot to add the book up top in case there were any Qs (Red Rain is part of a trilogy and we only have one) but here’s this!

And I don’t believe it’s linked to (or a reference for) Vamp-BG in Bombshells, no, but then again I can’t remember how she even became a vampire in that one.

She was in the south?? I think. I mostly just remember loving the idea of BG as a vampire

I’m starting with DC vs. Vampires, because I’ve been meaning to check it out.

Perfect month for it! I hope it doesn’t scare me

This has bothered both myself and @LaserPuff many times when planning House of Horror. It gets brought up at least once a month. However, the trilogy is available in Batman Elseworlds vol. 2.

That’s supplemental if we want more info on the Convergence story, like Razz said, right? I should stop asking questions like these, my reading list is long enough.

The only Bombshells I’ve read is the stuff @Angel212 picked a few months back. I have no idea.

This has bothered both myself and @LaserPuff many times when planning House of Horror. It gets brought up at least once a month. However, the trilogy is available in Batman Elseworlds vol. 2.

Thanks, @D4RK5TARZ! This is why I love this place. It can be really hard to track down some of this stuff or know where to even start looking!

And I don’t believe it’s linked to (or a reference for) Vamp-BG in Bombshells, no, but then again I can’t remember how she even became a vampire in that one.

She was in the south??

Yes she was, I remember mainly because Killer Croc originates in the bayou in that story. I don’t recall how she becomes a vampire either…and I’ve read it at least twice. There’s too much comic content (and Pokemon trivia) rattling around in my brain to keep track of this stuff!

I’m starting with DC vs. Vampires, because I’ve been meaning to check it out.

Perfect month for it! I hope it doesn’t scare me

Let us know what you think, @Ultrasonic! I’m probably chickening out of reading that one.

Thanks for posting this thread, @Razzzcat !

I’m planning to read maybe two or three of the other selections later but for now I honestly wasn’t aware of the Wonder Woman: Convergence two issue storyline. And that’s kind of nuts, because this is one of the last big Summer events that I bought the physical paper versions of before I went to pretty much all digital Unlimited back around 2015.

The summer of 2015, my wife and I took a vacation up to the Thousand Islands in upstate central northern New York. There was a comic book store at a nearby mall in Watertown where I picked up a lot of the Convergence for fun while staying at a cottage on the St Lawrence.

So yeah I’m a little surprised I missed this gem.

I will say that I really like this particular version of Wonder Woman where she lost her powers and ran around in a white suit in the late sixties. I did find it interesting that her mentor I Ching isn’t in the story at all. Maybe he’s not PC anymore, I have no idea. I think he was drawn and presented respectfully, but that’s just one old man’s opinion.

Well he does make it in the one page summary at the end of the first issue, written by somebody on the editorial staff: 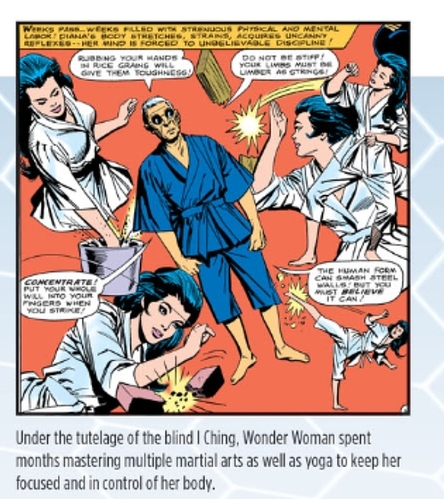 Convergence did have a lot of very dreary and depressing endings of stories. It’s too bad, because many of us bought the series thinking DC was finally going to bring back in the multiverse idea in a big way… You know, like they’re finally doing now eight or nine years later?

But it was still a kick to see all these many worlds revisited, even if it was often bleak.

The writer Larry Hama is most famous for his Marvel version of GI Joe, along with stacks of Venom and Wolverine… so it’s not too surprising that this story is so violent and full of characters passing away.

I will say that I really like this particular version of Wonder Woman where she lost her powers and ran around in a white suit in the late sixties. I did find it interesting that her mentor I Ching isn’t in the story at all.

Didn’t all the heroes lose their powers in the Convergence? I definitely remember that from the Superman comic, anyway.

So for that reason, I wasn’t thinking of this being specifically the version of Wonder Woman that lost her powers in the 60’s, which may be why there is no I Ching. But the white outfit is an interesting callback to it that I hadn’t thought about, so I guess I’m not sure.

Glad you got to check this out, @Don-el! Thanks for sharing your thoughts!

However, the trilogy is available in Batman Elseworlds vol. 2.

There’s too much comic content (and Pokemon trivia) rattling around in my brain to keep track of this stuff!

Thanks for posting this thread, @Razzzcat !

@Don-el! Hello, and welcome! There’s still some Convergence I’ve missed as well, but this was the first one I read…probably because I habitually look for Diana first

but most importantly I’m glad you enjoyed the books. I did catch the throwback w/ her white costume too! I think perhaps that it used the same font for the cover put me in the mind set?? Maybe.

Anyway. Thanks for coming by—don’t be a stranger!

I only read the Wonder Woman story at the front. It’s actually a surprisingly entertaining story, with more than a few parts revealing snippets of the history and culture of the time that seem very strange today.

But overall, the main storyline would work well even today. By emphasizing too much her experience in the real world, but not really talking about the downside, Wonder Woman creates an undue temptation to the women who are stuck on the island. 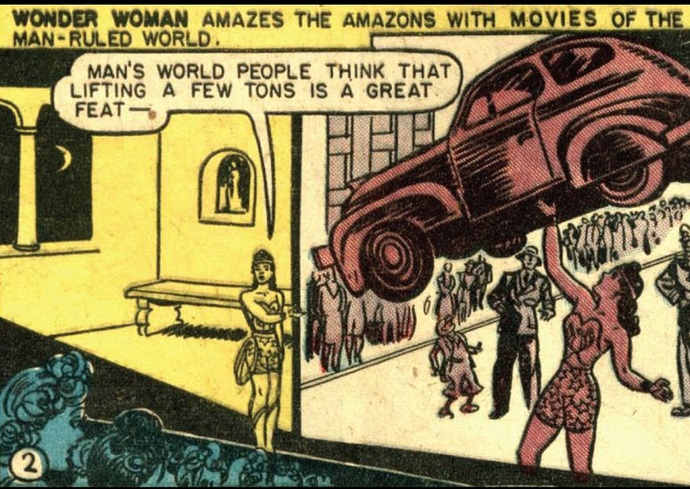 As a result, a group of the warriors decide to try to break free. One actually succeeds, and unfortunately that one is particularly evil and murderous. 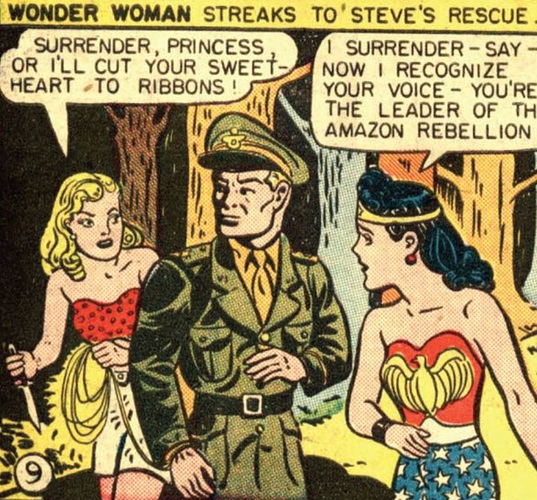 In the end Wonder Woman only succeeds in stopping this crazy lady from doing her in because Steve Trevor at the last second is able to intervene and distract the villainness.

So a very solid suspenseful storyline. It reminds me a lot of the darker films that came out in the early 1950s where about the only people that would be left alive at the end of a film would be the hero and heroine, with dozens others no longer among the living.

Here’s the pieces of culture and history that come through in this particular story that I found intriguing and a little baffling at times: 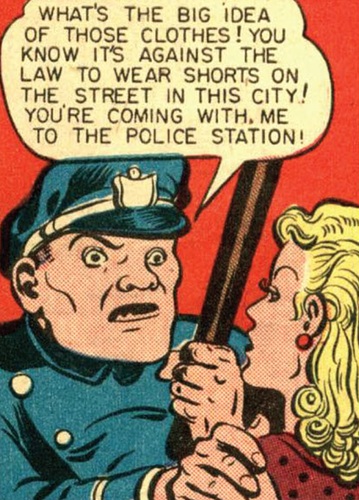 Can this really be true that there were laws against women wearing shorts in public at some point in the 1940s???

Then there’s this scene of Wonder Woman having a classy breakfast: 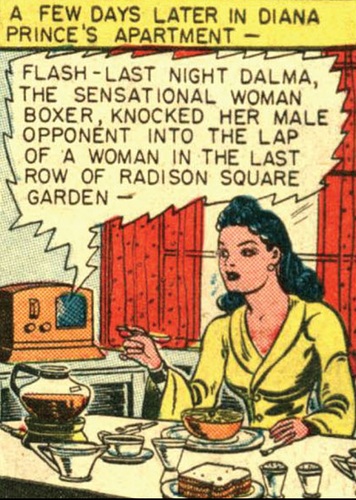 Nowadays, this would be more of the scene of somebody impoverished where they only have an old time radio to listen to and they’re forced to boil their coffee instead of being able to afford walking over to Starbucks.

But I have to say I was very startled by the famous invisible plane not being a jet but instead having a propeller. I’m pretty sure they had jets by then, but you know, I might be mistaken! 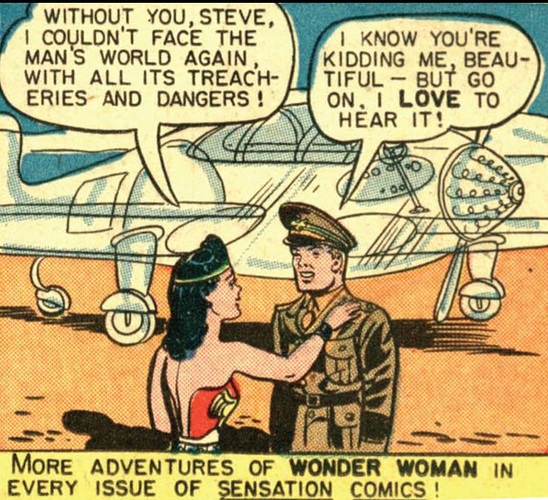 Again thanks for posting this reading! I think there’s at least one other one I want to check out later this week.

Can this really be true that there were laws against women wearing shorts in public at some point in the 1940s???

Unfortunately, this is based on truth… 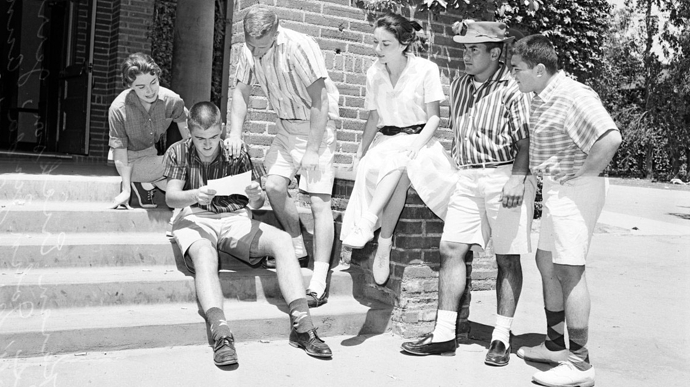 When Wearing Shorts Was Taboo

In certain places in American history, showing a little leg has been illegal — for men and women.

Let us know what you think, @Ultrasonic! I’m probably chickening out of reading that one.

There isn’t any tank throwing (yet

) but there is some Canary to make me keep going! 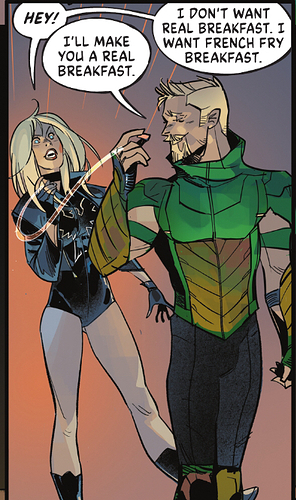 I was in the mindset for an alternate reality, so I could appreciate it for that alone. Some of the artwork was really good, and there is a lot of action, but then some of the dialogue was melodramatic and the plot felt rushed. I was not sold on how Diana gets turned, but the idea of her and other characters being unkillable super demons is scary

so they rushed to that point. Overall not bad and not as creepy as I was expecting. The mystery doesn’t seem particularly mysterious where I left off, so I’ll come back to catch up eventually, but not until it’s all available.

Here’s this if anyone is feeling festive

[listen_along_bug_blue] Welcome back to another spooky chapter of Mixtape Monday! Our last installment was a wrathful one for the Spectre: