We have a few other activities afoot this month, focusing on the Amazons in Themyscira, so we’d like to invite you to join a few of them for a quick trip to Gotham! …perfect vacation spot, right? Wrong!

We’re on a mission! 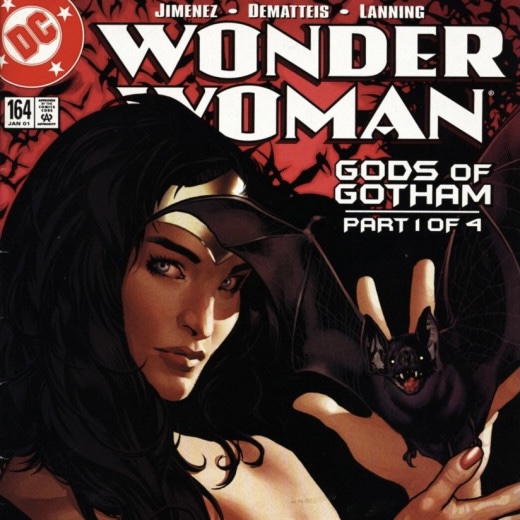 After Penelope, oracle of the Gods, has a vision that forces of panic and discord are rising in Gotham City, Diana and Artemis arrive just in time to discover 3 rather dangerous citizens have all been possessed by the children of Ares: Deimos God of Terror, Eris Goddess of Discord, and Phobos God of Fear.

Been wanting to read this one for about the last 16 years, so as Batman himself said in Batman Forever, “Tonight’s a good night.”

Also, Adam Hughes killed it with his Wonder Woman covers. Hell, he kills it on every cover, regardless of property and/or publisher.

But if my fav female DC hero is on the case, I’ll happily tag along on the vacation (I hope we stop for pictures with roadside attractions, Griswold-style).

I believe I will read this selection from my snazzy Eaglemoss hardcover which collects 164-170 and New Teen Titans 38. 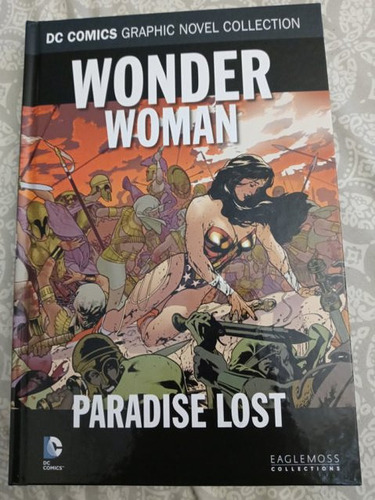 …you know, the man could draw a bag of garbage and it’d still be worthy of recognition in the Themysciran archives, mmhmm.

Cool! Read this a while back for WOB, and should be fun to read it again, especially for that early Phil Jiminez artwork and the teamwork for not just Batman and Diana, but for the Bat and Wonder Family in general.

I am reading from my book but I had to get a screenshot of what might be one of new favorite scenes in a comic.
Issue 1 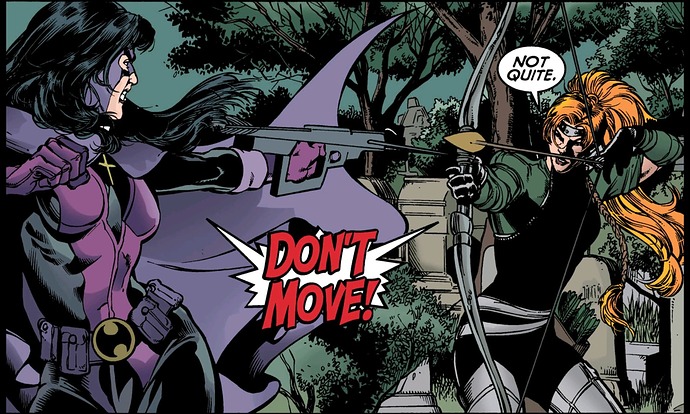 Right?! It’s not every day you read a comic with Huntress and Artemis aiming bows at each other.

And it’s such a good pairing in terms of their character histories – both being the more gritty and “extreme” members of each family, it’s definitely fun to see the two bounce off each other.

I really enjoyed this story. As @Jay_Kay mentioned, the team-up of Artemis and Huntress made sense and I would love a Blue and Gold type series with these two.

One thing that struck me was how many religious conversations happened, whether it was with Wonder Woman and Batman or Huntress and Artemis. The interesting thing about this was that it felt normal and not shoved into the story. Artemis who believes in multiple gods compared to Huntress who is a devout believer in God, it worked.

I can see why this story was selected as the first for Wonder Squadron to read. There was a rare Poison Ivy and Harley Quinn appearance, at least in a Wonder Woman comic. With that said, it felt more like a Batman comic than a Wonder Woman comic. Granted, it took place in Gotham and all of the familiar faces were there.

As for the Wonder Woman family, I am not exactly sure what Cassie’s evolution was up to this point but I did find her to be fun and rebellious. Artemis was great to see. Wonder Woman was great and remains the only character that can go face to face with Ares and call him out on his BS.

BTW, I would absolutely read an Artemis/Huntress mini.

Ah, I read this recently when I did a reread of most of post crisis. It was an interesting story to go into as someone who never really read the Batbook stuff until semi recently and never felt the need to look into post crisis.

Huntress in this threw me the most as I went from reading her as a backup in pre crisis Wonder Woman where she was the daughter of Batman to now being an entirely different character.

I loved the whole idea of the gods selecting avatars who matched them and using them to their whim. Reminded me of a combination of ‘Ares Buchanan’ from the William Messner Loeb run. And the golden age origin of Doctor Psycho.
Though it did make me want to see what we could get if an idea like this was attempted but with Dianas own villains.

Regardless, this was a rare story wherin the Wonder family was actually together. Heck as far as I know this was the only other time aside from the current Trial of the Amazons and that weirdo finale of Byrnes run where this was the case.

Not really as keen on the Batside of things so I wont comment to much on that, but the portrayal of the Wonder family was quite nice and I found it really enjoyable.

Still rather prefer the pre crisis children of Ares over the post crisis set, but what we got made for a rather interesting treat. And seeing the god of fear switch from Scarecrow to Batman was rather amusing.

That said, for such a big story it was a bit frustrating how contained it all felt. I wasnt sure of why until I read an interview thing with Jiminez wherin he explained that the editorial of the Batbooks said he was only allowed to use the Batcharacters for the story on the express condition that no one within Gotham were allowed to know what was going on and it could not be acknowledged.
This was apparently because the editorial at the time was apparently really opposed to ‘weird elements’ in the DC universe and wanted to mandate away anything like superpowers and magic and wanted to make Gotham as grounded as possible and try to somehow pretend that it doesnt share a universe with Wonder Woman and Superman or that Batmans on the Justice League which he was also apparently opposed to.

As a story for kicking off a new run and gave us a hint of what we were in for, Gods of Gotham was exquisite and really delivered. Jiminez is easily the one writer who most played with the idea that Wonder Woman shared a universe with other characters and made interacting with them a large chunk of his story.

I just read this a couple of months ago while I was working my way back through WW’s main title. It definitely has a different feel about it. Since I focus on mostly WW comics, it almost feels a little jarring when there are other DC characters about. Her main title does not have an awful lot of crossover characters from the rest of the DC Universe, so when they do show up it is noticeable. It’s almost like “Oh yeah, they do share a Universe.”

Fun concept, solid writing, good art, characters I care about, this arc was definitely an enjoyable read. I do say that about all WW stuff, so maybe I am just really easy to please, but other people seem to really like Jiminez as well so it’s not just me.

That is actually an excellent summation of her character. She is the modern Vanessa Kapatelis but manages to become a superhero on her own initiative (twice) and I am very fond of her, although I have no idea what happens to her after she fades out of WW except as she makes brief appearance here and there. I am hoping her character arc does not end up like Vanessa’s, which just makes me sad.

As I recall its something along the lines of her falling in love with Superboy, then Young Justice disolves and everyone joins Teen Titans. Then because Titans is all about angst and drama a thousand different bad things happened to her including her boyfriend dying and she became a very grim and depressed individual

for such a big story it was a bit frustrating how contained it all felt.

Agree @nuuninuunani. It’s been a while since I’ve read this, but that’s how I felt the first time and still feel after reading it again—could’ve been a much larger story. A great start for Jimenez either way, of course. And, like you said, it’s one of those rare stories where we get the Wonder Family together, while also being a part of the larger world within DC comics—mixing their own philosophy and mythology in, which is why it still feels very much like a Wonder Woman comic to me.

If thats the way they’re going to be utilized, yes.

I blame Teen Titans. No character can enter into that franchise without becoming bitter and traumatized. At least Star Blossoms had better luc avoiding lasting trauma

I will always enjoy Diana in a team up. and she is on someone else’s turf, which is almost tradition. Since I grew up on the Titans of Wolfman and Perez, seeing any of those characters further along in their timeline(s), added to the story for me.

Diana and Batman work off of each other in a more intellectual way. I would like to see them in more fighting sequences.

Wonder Woman was great and remains the only character that can go face to face with Ares and call him out on his BS.

This comment brought a smile to my face. Yes to this!

I read through all of Jimenez’s WW stuff recently but it had become mushed together in my brain along with all my many other readings.

I’m glad I had the excuse to reread this. Definitely a fascinating look at different faiths, and the different philosophies of Gotham and Themyscira coming together. A couple of favorite panels: 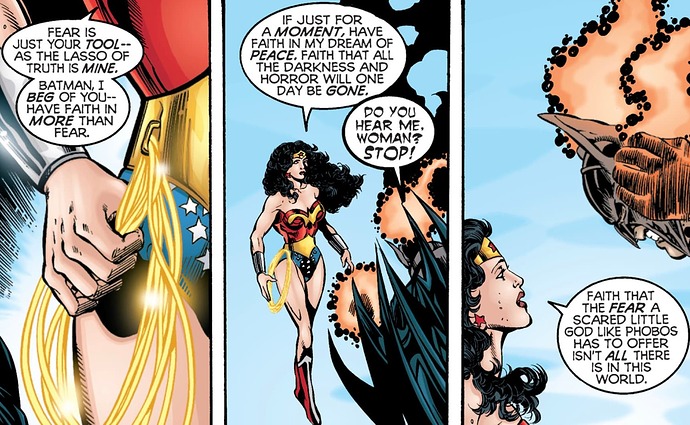 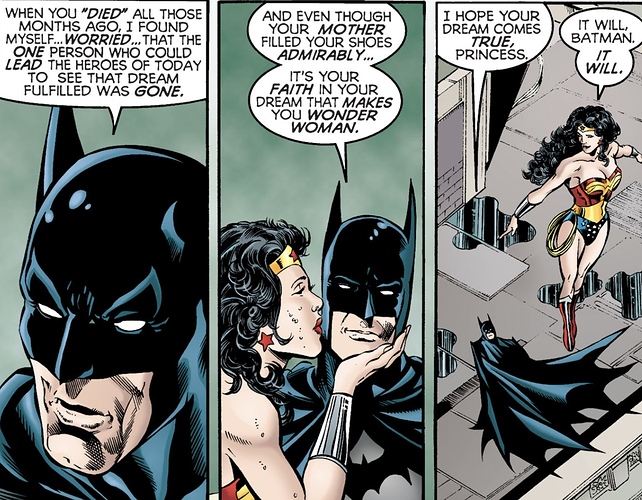 Also, Diana coming back from death recently in this story reminded me of her arc in her current series. Kinda interesting how they seem to revisit these ideas all the time.

I think recycling ideas works with certain characters. Wonder Woman dying, that somehow works. Batman having his back broken, that is a one time attraction.