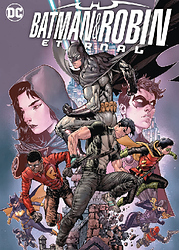 I agree his writing isn’t as strong as his art – though that’s not surprising since his art is freaking GOD-TIER and if his writing was as strong there would just be too much talent to contain in one body.

He’s done a few other works before and I think since. His OGN of Batman: Noel was really good (I tend to read it every Christmas time) and he had a Vertigo series called Suiciders: Kings of HelL.A. that I’ve heard good things about.

I haven’t read these since they came out, but that whole New 52 era really shined with everything Batman, in my opinion. I remember Endgame was HUGE.

I have read the whole ‘Robin war’

Hmm…did everyone get a notification because I fixed the title of this old thread?

(If you wanna read it again, though, go for it!)

I’m going to start this after I catch up with Nightwing on #5 right now.