I don’t know but you guys can decide idc

I prefer it when the Joker thinks he has a different origin each day of the week.

The joker is better without an origin. He falls into the bat and emerges the fully formed character. Any Joker origin creates a sense of empathy for the character, which ultimately takes away some of his power. Who that person was before the Joker is irrelevant.

I don’t buy into the “It’s better if he doesn’t have an origin” Mentality. That’s an excuse for lazy writing and so they can cop out if he’s new origin doesn’t work out.

Personally, knowing he was once a normal guy makes him way scarier to me because it shows that anybody could become The Joker.

It’s absolutely the opposite of lazy writing. For a character like the Joker the fact that he literally could have been anybody, is what actually makes the “anybody could become the Joker”.

Most villains have an origin story, there was a reason why for 45+ years the Joker didn’t.

Do you really think Bill Finger, Len Wein, Denny O’Neil and any number of others weren’t capable of making a joker origin? They didn’t, because it isn’t in any way relevant to The Joker as a character.

Even in The Killing Joke he tells us that this may not be legit and he’s an unreliable narrator, sometimes remembering it one way, sometimes another.

Except he was given a backstory way back in the sliver age. It’s the same basic one he always has. Red Hood, Acid bath, etc.

Him having a multiple choice backstory wasn’t really a big deal until Killing Joke.

Because all we knew was there was a person under that Red Hood and then the chemistry bath. Who he was under that hood and what that person’s backstory was didn’t mean anything. It was only the fact that in fighting Batman the Red Hood ended up in the chemicals and the joker was born,!in such a way that he would be a foe of Batman.

Would have to be the killing joke for me. I think the way the novel and animated movie tells the story is always gonna leave you guessing and trying to figure out, who the joker really is. That makes for a lifetime of discussions much like this one lol. I think the killing joke is a true origin story for the character. If it’s been awhile since anyone had read the novel and watched the movie, go back and do both, then watch Joker and tell me if you agree with me on this. Do both characters in the killing joke and Joker remember their pasts in multiple ways and get to choose which past they wanna tell? Let me know. 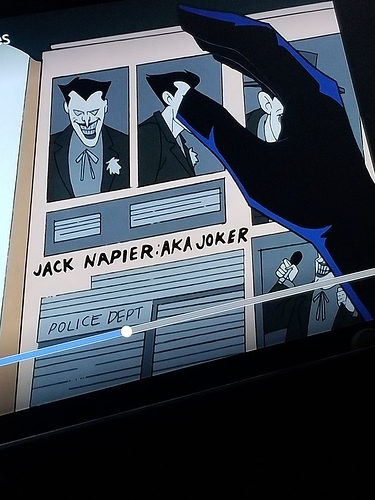 I prefer Moore’s origin by default because it bears at least a passing resemblance to Finger’s origin.

The Red Hood is a bad guy and a Batman villain. And yet in the Killing Joke, my favorite graphic novels for years, we see that the Joker was not the original Red Hood, but instead a poor simple schmuck caught in circumstances beyond his control. In a period of two days he loses his wife and new born child, is forced to break into a chemical plant, is shot at, chased by Batman and falls into a vat of toxic chemicals. But does this fit. Almost from his beginning he had underworld connections, a knowledge of explosives, chemicals and use of terror as a weapon. Does this fit a former stand-up comic. Though the Killing Joke was an awesome story and animated movie, the origin just doesn’t fit.

I agree with @DeSade-acolyte here. The mystery of The Joker makes him not only scarier, but more versatile. He could be anyone and anything. He’s unknowable.

Personally I’ve been more scared of Jokers who do have established back stories than I have been of mystery ones.

I’ve always been a fan of the “multiple choice origins” idea, or that the Joker can’t really tell if he’s remembering something or if he imagined it. The Joker movie used this idea to great effect. As to whether he’s better with an origin or not, that largely depends of the execution of the story.

Personally, while the Killing Joke was interesting, I’m not really a big fan of it as an origin story. I mean, I get the “there but for the Grace of God” aspect, that anyone could become the Joker after one bad day, but that’s not really how it works. I’ve read enough about true crime and real serial killers to know that it takes far more than one bad day for a normal person to go that bad. In the end, the Killing Joke itself seems to undermine this, showing that the Joker’s efforts to break Gordon fail, and the Joker admits that he can’t be sure what happened to him. I kind of interpreted that as “the story you just read may or may not be true,” but that’s just my interpretation. I’ve actually been kind of disappointed that some in DC have been intent on treating it as solid canon. I don’t think that that was the intent.

One of the things I liked the best about the Joker movie was that it told a completely original story, and didn’t just regurgitate the Red Hood origin. I don’t think that doing so detracted in any way from the Joker or from the movie itself, especially since it left the door wide open for it to have just been another multiple choice origin story.

The Joker’s true identity is… the Joker.

I’d write more, but I feel like @ralphsix, @DeSade-acolyte, and @HubCityQuestion have the ground covered, already.

I like your opinion and if I may add, I found it very interesting and fresh that they made Arthur’s actions in ”Joker” lead up to the creation of Batman. This whole movie is set up like a domino effect much like how the Joker’s life is a big snowball continuing to roll downhill. The Killing Joke will always be a classic story and after watching it, I can say that the answers to his past may be a mystery still but in ”Joker” The interpretation of the movie is up to the audience and less of what the character is trying to portray. Was the entire series events in his head the whole time while locked up in the asylum? Who really knows and that is the artistic style of it.

The thing is both are made so that you don’t know if they are even true. I like the idea that there is never a true origin for The Joker.