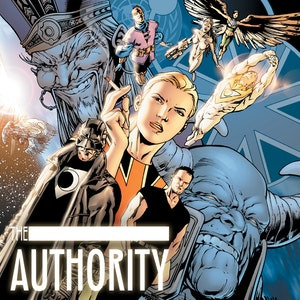 To kick off the festivities for Pride Month in The Wild and Wonderful WildStorm Way™, we’ll be taking a look at the original volume of The Authority, starring openly gay heroes Apollo and Midnighter, along with Jenny Sparks, Jack Hawksmoor, the Engineer and Shen Li-Min!

"I’m brand-new to WildStorm. What is it, what exactly is The Authority and why should I read it?"

Welcome to WildStorm, the Jim Lee-created imprint that’s packed with:

The greatest and most epic pantheon of super heroes and villains located just outside the DC Universe.

DC and WildStorm crossovers tend to be frequent, so keep an eye out, as you just might see your DC favs alongside some new faces and names that will become your new favorite heroes and villains!

If you like spies, WildStorm is definitely for you!

Fancy an adventure worthy of Tom Clancy and the like? WildStorm has you covered, friend!

Mind-bending sci-fi, epic fantasy tales worthy of Tolkien, Brooks and more and tie-ins to some of your favorite movies, TV shows, video games and beyond are absolutely under the WildStorm banner.

If you like comics, cool stuff, things that don’t suck, discovering new imprints, franchises and characters within DC that will make you say “I never knew how badly I needed WildStorm until just now!” and things that are cool and ultra-badass, then trust me, you will absolutely fall in love with WildStorm!

As for The Authority, they’re the team supreme of skull-cracking hardasses in the WildStorm Universe.

When trouble brews its ugly head,

“you know who to call”

and it most definitely is NOT the Teen Titans!

Just why should you read issues 1-4 of this series? 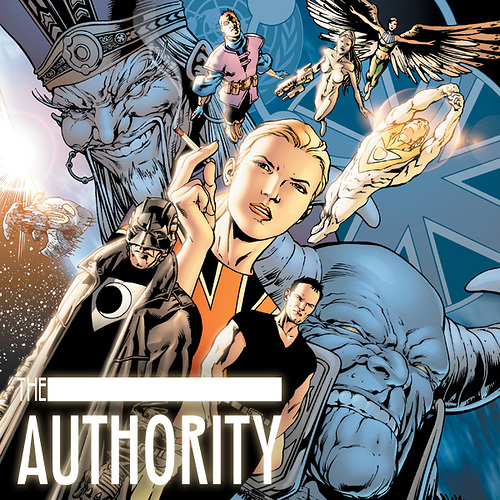 After the demise of StormWatch, Jenny Sparks recruits a new team of heroes. But they might be too powerful for their own good.

Because its the beginning of The Authority, your next can’t-miss, page-turning, must-read, comic obsession!

To say anything more is to ruin the fun, mind-bending trip that is The Authority and I will not ruin your fun, so dive in and have fun at the very beginning of WildStorm’s greatest collection of dimension-hopping, day-saving, skull-cracking heroes that are…The Authority.

Also: For more of the WildStorm’s best and most badass, check 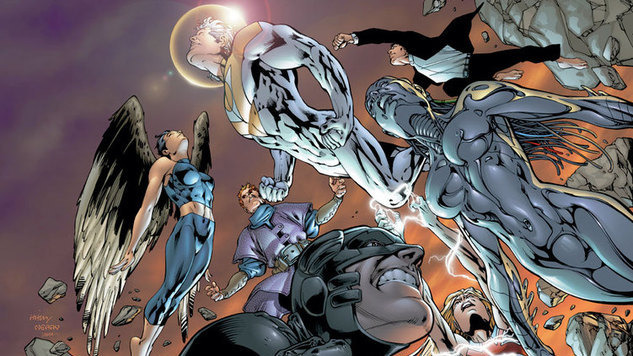 I’ve read these few issues before, and I really like it, for the most part. I liked how they were able to catch you up on who these characters are while still doing it’s own new thing. The Brian Hitch art is incredible, and while we don’t get super deep into the characters, there’s just enough there to tantalize and make you want to see more.

If there’s one criticism I have for this story, and it’s honestly a big one, it’s the villain. Like…why are we doing Fu Manchu stereotype evil villains? I’m pretty sure that crap was looked down on even in 1999. I remember first seeing this and wondering if maybe Ellis was going to do a subversion of it, but…no, it’s played painfully straight, and just in terms of threat he is a strong villain, but it just feels kinda gross.

The Brian Hitch art is incredible

Hitch’s art is what originally drew me to this series.

If memory serves, I discovered The Authority right around when I first read The Ultimates. Having that one-two punch of Hitch badassery forever cemented him as one of my favorite “spectacle artists”.

Have you read any of the other Authority series, @Jay_Kay?

I’ve read a little bit further into Ellis’ Authority, and if you’re willing to count it, some of Orlando’s Midnighter and the New 52 Stormwatch. I do plan on reading more, though from what I’ve seen, some later arcs become a little…edgy for the sake of being edgy for my taste. By that I mean Mark Millar.

Also, have to be honest, for a split second I almost wrote “Moonnighter” and I had to stop myself. Apparently I got my night-based ultra-violent vigilantes who hears voices in their heads confused.

if you’re willing to count it, some of Orlando’s Midnighter

[image] Happy Friday and Pride Month, @TheWildstormUniverse! Whether you know and love him from The Authority and elsewhere within the WildStorm Universe, the New 52 volume of Stormwatch or he’s brand-new to you, Midnighter is a character that knows your every move, knows if you’ve been good or bad and he is most definitely not Santa Claus!

The New 52 Stormwatch will probably come along at some point, too.