Why Superman the Animated Series is an Underrated Gem | Chimp Recommends 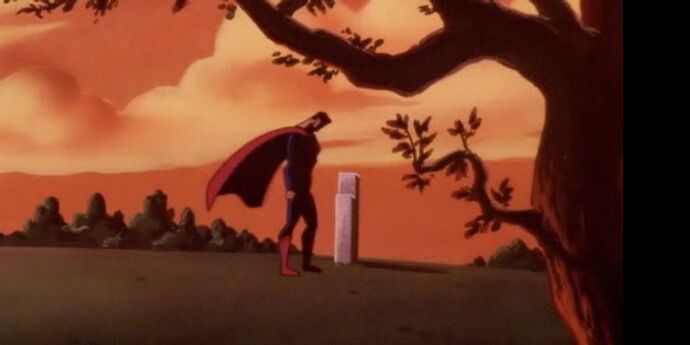 Happy anniversary Superman the animated series! It’s kind of a shame I am one of the only ones talking about this. I didn’t imagine I was the only one who would be enthusiastic. Which kind of proves the point I have been stating for years about how underrated the show is. this is one of the most comic accurate cartoons and probably the most accurate superman media period, yet I haven’t seen it reach the acclaim Superman the movie and the newly beloved Superman and Lois have. Don’t get me wrong I love both of them and think Superman the movie is better than superman the animated series and Superman and Lois comes close. Superman the movie is the magnum opus of the superhero genre and understanding Superman more than Superman and Lois is very tough, but luckily there is an immensely underrated child friendly work of art that understands the character even more, and that work of art is Lego Batman: DC Super Heroes Unite. But for real, here’s why (I believe that) Superman The Animated Series is an underrated gem. 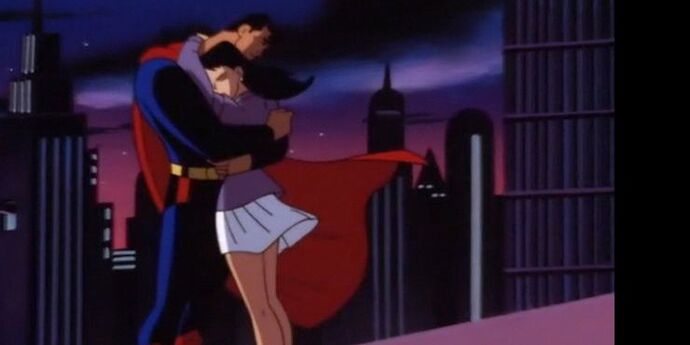 All right nuclear take for you all, this show’s Lois Lane is the best version of the character ever, please allow me to explain, I know the character has had a wide array of alternate takes. A big problem I have with Lois is that she neglects Clark and she likes Superman because Superman strong and handsome and…yeah that’s about it. I know people will get angry at me for saying this, but this is why I dislike the Margot Kidder version of the character. I have no doubt that Margot Kidder did a great job with the script given to her but I dislike the characterization and sometimes her performance suffers from it. The Lois in the Dan Jurgens run avoided this but the character feels lifeless on account of her being stripped of what made her stick out. But then we got Superman the Animated Series.

This superior Lois gives everything I love about the character but sacrifices what I really dislike. She is open minded to Clark without losing the charm of the character and despite her constant teasing of Clark you can tell they both have a mutual respect for one another. But while the two have a great dynamic Lois is in love with Superman not only for his looks but also for his personality, something I find surprisingly uncommon.

Jimmy Olsen is pretty good even though he doesn’t play a large role most of the time, ahh just how I like him. Okay, that came off too harsh. I am fine with him as long as he doesn’t overstate his welcome, occasionally I even enjoy his antics. His friendship with Superman is wholesome and the ending of “Superman’s Pal” is the most satisfying thing, brings me joy every time.

Lex is absolutely fantastic. I cannot read a comic without hearing Clancy Brown‘s voice as Lex. He is easily the best Lex outside the comics, mostly because of how limited his competition is(please don’t hurt me Smallville fans). I don’t have much to say, Lex is just as smooth as his own head. 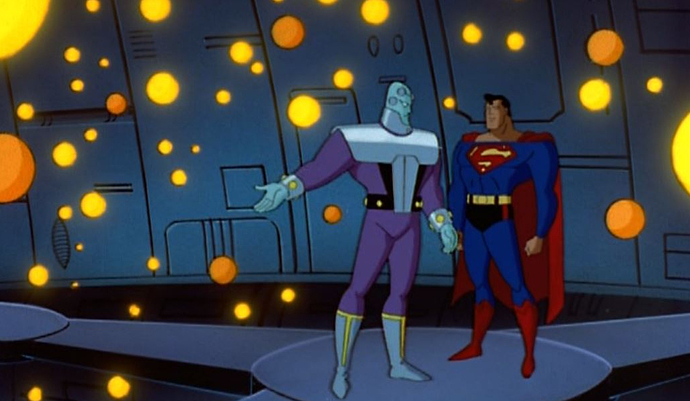 For as grounded in it’s source material the animated series was, whenever it introduced it’s own concept, the idea felt natural to the world established and the best example of this is probably Toy Man.

I ran a poll on “Polls, Polls, Polls: DC Edition” asking how many people knew of Toy Man’s origin and the results were 75% no. Keep in mind the poll was on a DC forum, where everyone is assumably a DC fan in some aspect. Superman: The Animated Series tried to appeal to children who have never even heard of Toyman let alone heard of his origin. I’m sure there are some adult fans who hate that Toyman was completely altered, but in my opinion, a change from a comic to a show or movie is welcome as long as the alteration works in favor of that particular story.

Sivanna in Shazam! (2019) works in contrast with the title character, a dark reflection of who Billy could become unless he is able to let go of what he has been chasing after for so many years and accept the family who welcomes him, not letting the powers of a superhero stray him farther away. But this is not the case with Bane in Batman and Robin, because Schumacher decided on cramming three different villains in the same movie. While the alliance between Mr. Freeze and Poison Ivy is somewhat straightforward, Bane doesn’t have enough time to be established as an individual so he is thrust into the scene establishing Poison Ivy without any care for his character. This version of Toyman works as, as my good friend @TheTerrificToyman said, “Jigsaw before he was cool”.

Another great altered villain is Brainiac, whose origin is contradictory at best so it isn’t that big of a deal that a main Superman villain was changed. Brainiac is adjusted to have started out as a robot to help Kryptonians worldwide. The relation to Superman gives Brainiac and the hero such an interesting relationship. Brainiac has the only proof that Krypton even existed and uses this vulnerability to his full advantage. For many years I viewed this as Brainiacs real origin. It just seemed the most uncomplicated explanation, and plus Hal 9000 felt more the character than Megamind. 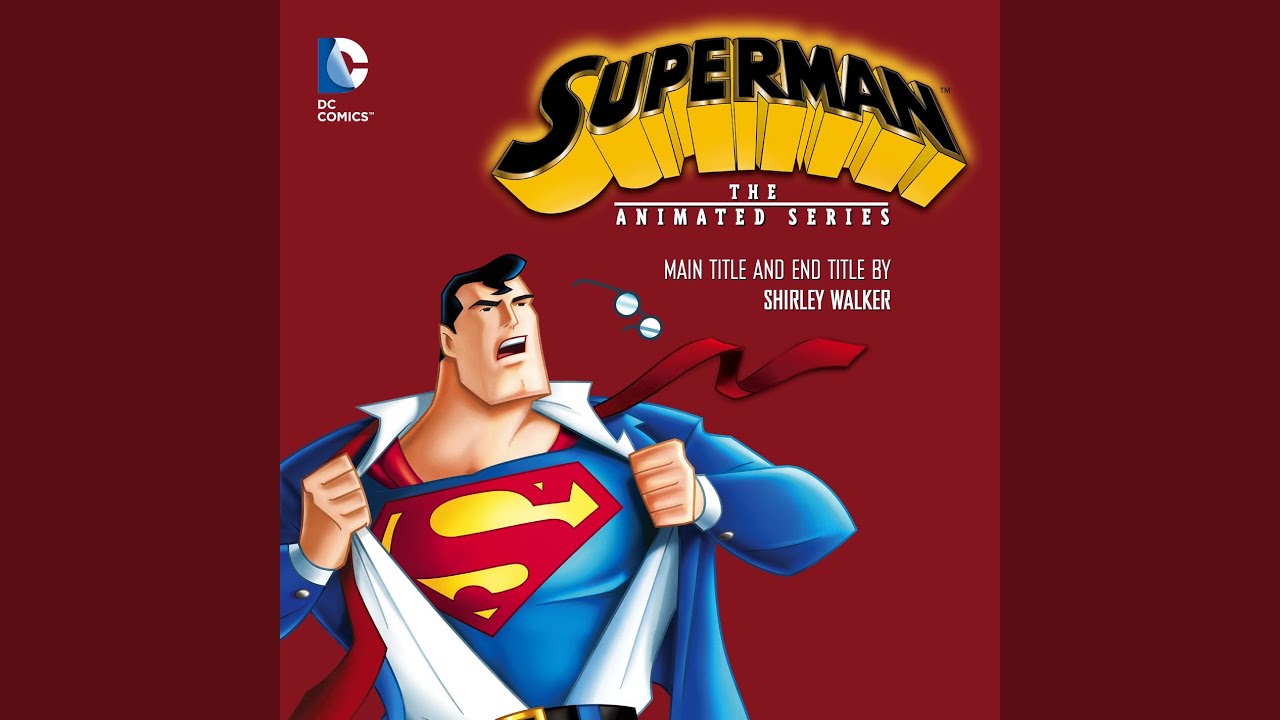 @Bar-El had made a thread talking about it here:

…but it’s my favorite version of Superman ever put to screen, so the more the merrier

This series highlights how great Superman rogues can be, if given the time to shine. Metallo is almost tragic, Parasite is a lowlife, Toyman is creepy, Darkseid is pure evil, etc.

I made a thread discussing where I think they go wrong with Toyman- this show showed him to be unhinged, so his motivation was less ‘I lost my business and I’m upset about it’ and more ‘I lost my childhood and my mind, and I’m gonna make the world pay for that’.

I love that Livewire was a shock jock who had it out for Superman, turning a whole crowd of her supporters against him. That type of villain resonates today more than ever.

Like you said, the voices were iconic. Dana Delaney as Lois is who I hear when I read her as well. Clancy Brown as Lex, Corey Burton as Brainiac, Michael Ironside as Darkseid, etc. They’re all just so good in their roles…the episodes never get old.

And now the theme song is stuck in my head! Thanks fam!

In all seriousness though, it is a total gem! I love how Supes can have so many emotions but always stay true to his core. We see him mad, shocked, scared, losing hope and fighting his way back to it. I mean in the very first appearance as Superman we see him mess up and his line “Nice one Clark!

” is just incredible! We can see his vulnerability and pressure he’s putting on himself while still having fun with it and not being mopey or stoically silent.

He is easily the best Lex outside the comics, mostly because of how limited his competition is(please don’t hurt me Smallville fans).

We won’t hurt you, but Otis takes offence!
My head cannon is Smallville Lex grows up to be S:TAS Lex. Maybe he gets punched in the throat and his voice drops an octave

Lex is just as smooth as his own head.

For many years I viewed this as Brainiacs real origin.

I LOVE this version of Brainiac! Tying him to Krypton’s demise like that and then finally bringing him back later on in the show was genius! I too prefer this origin to measure all others against.