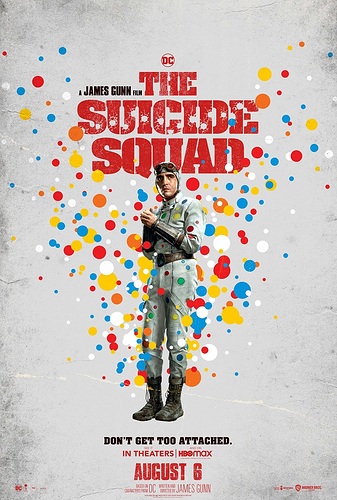 Who is the most fearsome villain in the DC Universe? Forget the Joker, he’s nothing but a clown. Move over Lex Luthor, you can’t even grow a mullet. Step aside Darkseid, you might be a New God, but you haven’t harnessed the power of polka-dots!

That’s right, we’re talking about Polka-Dot Man. Are you rolling your eyes? Don’t act so smug dear reader, Polka-Dot Man has left Batman cowering in fear. Have you ever scared the Dark Knight? I didn’t think so. With Polka-Dot Man making his cinematic debut this weekend in James Gunn’s The Suicide Squad, let’s take a look at his dotted rap sheet. 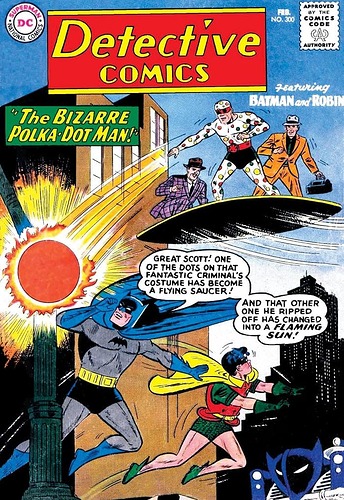 If you’re a DC UNIVERSE INFINITE member, you could read the issue, and I’d recommend it because I suspect Abner Krill’s polka dot beginnings will surprise you. Let’s start with the cover, which depicts Batman and Robin fleeing in terror as Mr. Polka-Dot shoots his deadly dots at them. “Great Scott! One of the dots on that fantastic criminal’s costume has become a flying saucer! And that other one he ripped off has changed into a flaming sun,” the Dark Knight cries. That’s right, Mr. Polka-Dot can conjure miniature suns! Things are getting crazy, and this is just the cover. Imagine seeing this on the newsstand in 1962.

To learn more about Polka-Dot Man’s evolution into DC’s toughest villain (no joke!), head over to DC Comics!

Are you with us when we say that Polka-Dot Man is tough as nails? Let us know in the comments!

Without spoiling anything, I definitely feel he was one of the breakout stars of the movie.

And to think that 13 years ago, he was a lackey for Ledger’s Joker named Thomas Schiff.

Boy, he moved up in the world, didn’t he?

ok that and the Antman movie how many comic book movies has this guy played different characters in?

He was also a guest-star on Gotham.

so he’s just like collecting superhero rolls for fun now

Who can blame him? I certainly don’t.

He was also Abra Kadabra on The Flash, and if you’re counting animated appearances, there’s Calendar Man from The Long Halloween

Any word on if he’s a comics fan, and that’s why he’s taken these roles, or is it just a coinkydink?

Oh he’s definitely a big fan, so much so that he even wrote his own miniseries for Dark Horse a little while back!

If you love his comic book movie performances, you may love the comic books he writes. Here's what you need to know about David Dastmalchian comics.