Why do you love Superman?

Hello, everyone I am starting a who do you love either hero or villain; I will post at every other day. So I want you the fans like myself to tell the world why you love Superman the first Superhero.

Hey @jsmsiggy. Been a while. Hope all is good!

I’ve answered this one before, but feel the need to participate. Copying and pasting from an older thread:

I’m pretty sure I’ve written posts like this before, and I’ll probably be repeating myself here for the most part, but what the heck…I can’t pass up a Superman appreciation thread.

My first experience with the character that I have vivid memories of was in the mid to late 80s. I was 7 years old. I’m pretty sure this wasn’t the first time I was introduced to Superman…but it’s definitely what I most strongly remember. Superman: The Movie was on HBO. Anyone remember their old 3D spinning logo with the awesome music? The first thing that hit me is that John Williams score. Of course at that age I don’t know John Williams nor do I care…to my 7 year old ears, it was just the most uplifting thing. Then of course you watch the movie…you watch that helicopter scene and are jumping up and down in excitement when he swoops in and saves Lois aaand catches the helicopter after for good measure. You see this idealistic character that always wants to do what’s right…is always helping…from saving a cat from a tree to fixing the San Andreas fault…he does it all…and he flies …and that awesome S on his chest…and that cape! I was hooked. We recorded it on VHS. Every day that summer I would wake up and watch it, until the tape was so worn out that no tracking function could help it. Naturally, watching all the sequels followed, along with a trip to the theater to see Superman IV. All that stuff they say now about how the sequels were no good? You wouldn’t have convinced young me back then. God bless your soul Christopher Reeve.

Somewhere within that time period I also got to watch the Super Friends cartoons. I forget if it was Saturday morning or reruns after school. I would have to figure out when they’re on from TV Guide. This is where I got go see Superman work as part of a team. I was so into it, my big sister picked up a bunch of the Super Powers figures for my birthday. I wore those things out.

Then…well…at some point I grew out of it. I still liked Superman…still got excited when he was on TV. Still argued with other kids about how he was better than Batman (blasphemy in the Keaton days). But from the tween years on, he was just a character I liked…the wide eyed childhood admiration wained, for a good long while. Lots of Batman stuff came out in the meantime. I liked the Batman stuff

. In the mid 2000s the kid in me came back to life when Superman Returns came out…loved it. I started rewatching the old movies again and also started catching up on the Bruce Timm cartoons for Justice League and Superman. That was enough for a while.

Then in 2011 I saw an ad while I was browsing for the New 52, promising a fresh starting point, which took me to Comixology. That’s pretty much when I started reading comics, at the ripe age of 31 and I haven’t stopped since. Superman comics took me to Justice League to Batman and Wonder Woman, to learning there’s a DC Trinity. In the comics you see him more fleshed out in so many different ways…the survivor, the immigrant, the hopeful, the leader, the badass. You see him travel galaxies to fight evil and you see other heroes stand in awe in front of him…but he never loses that humility. Is he Kal El, one of very few survivors of a powerful and advanced alien race? Is he Clark Kent, the down to earth, mild mannered reporter raised by kind farmers? Is he Superman, the super powered hero that has helped save the universe on more than one occasion? He is a multifaceted character with many layers to peel, yet he’s not difficult to understand, because his mantra is how do I always do what’s right? How do I always give the best of me? No matter how simple or dire the situation is, you can always count on Superman to do what’s right. That’s why we call him a beacon of hope. I feel that way every time I take glance at his statue sitting on my desk

He’s always been something I could look up to. He always tries to do good, to be truthful. That’s what I love about him. A man beyond any man. Who does the extraordinary, and yet never takes it for granted. He tries to be humble. Everything I strive towards.

A big part of why I like Superman is because of his Origin. It’s one of the best in comics. Despite his great power he is humble and down to earth. His relationship with his adopted parents and his hometown are wonderful. This picture is a good representation of what I like… Clark and his “Pa” sharing a soda pop. Just makes me smile. 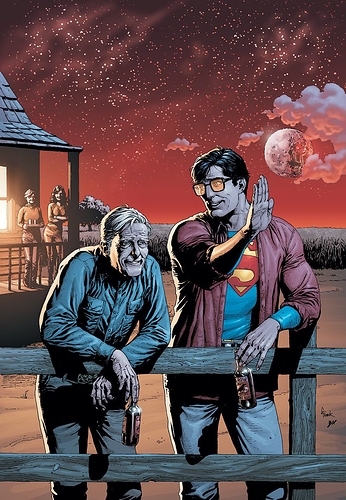 Superman enbodies all that is right in the world and all we can become if we just stopped fighting each other and become better. When I think of Superman usually I think of two quotes

“I teach you the Superman. Man is something to be surpassed. What have we done to surpass man.”

and these panels from All Star Superman 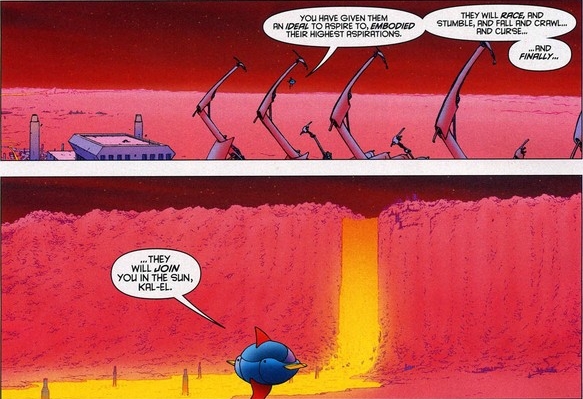 Along with that, The just cares about others, something lacking nowadays 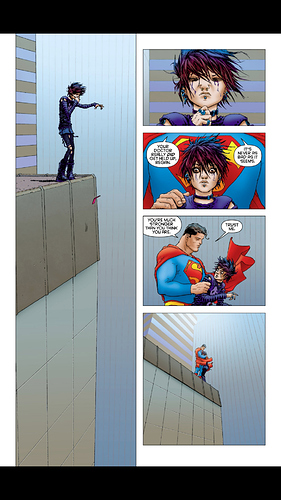 Probably when I first saw Superman the movie, he was more like a father figure to me, and just love the costume.

He stands up for the oppressed, and he torments Lois and Jimmy for fun. What’s not to love?