It worked for Zoe Saldana as Gamora and she looks awesome in the green make up.

Also I know its been said probably a million times but what was the purpose of making her look like two dollar hooker with that fur coat.

At least Starfire from the comics looks like a high class stripper with her look.

The hair also looks like something you get for a dollar at a Halloween store.

Its sad because there has been photoshops of her looking more accurate to the comic and she looks good as the character.

Also she acts nothing like Starfire either from the comics or the cartoon show.

Her personality is one dimensional with “Yeah I’m badass” and thats it.

Anyway thats how I feel so far with how she has been portrayed so far on this show.

Regarding the color, she’s orange when she uses her powers.

Beast Boy is only green when he’s using his powers too, but I haven’t seen people complain about his skin color or say he doesn’t look the part.

Beast Boy not being green bothers me as well.

He looks like something you would see in a Disney descendants tv movie. Also his CGI for his animal transformations look awful.

Also I remember when someone took pictures of Beast Boy and Raven and said they looked awful.

But most people latched on to hating Starfire because she looked the worst out of all of them for again the outfit and hair.

@ JohnOnyx115, two dollar hookers don’t wear fur coats. Furthermore, it seems that you don’ t know that much about the character, since if you did, you would know that she wore scantily clad clothing not unlike a two dollar hooker. Keep in mind that this is a fictional character and is subject to reinterpretations based on on the creative license of the producers. It seems like they chose to go the route of making Korry a xenbiotic being that lives inside a human host. That way thee don’t have to make her necessarily have orange skin (unless she manifests her powers). Just be glad that she dose use orange eye makeup, has green eyes, and wears purple. 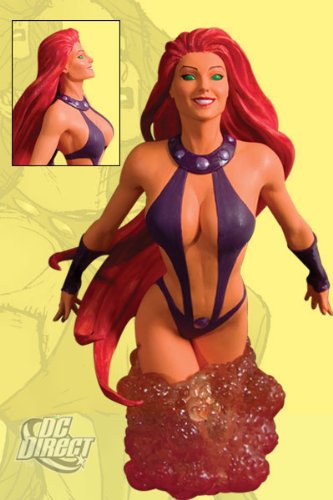 And thats an awful choice. As for the picture you provided I would take that over what we have currently. But hey keep on defending it.

Also you do know that I was referring to a fake fur coat correct?

A 30 dollar one from Wall Mart would dissagree with you.

It is most likely a budgetary issue. You’ve got to remember, Gamora is in extremely high-budget films with top notch special effects. The budget is literally hundreds of millions in dollars with a huge lions-share going to special effects. They are given that money with the purpose of making Billions of dollars back in on ticket sales.
Basically, a movie is given a budget based on the script, tv is given a budget and writes the script to fit that budget. So for a show like Titans, all the special effects that happen are essential to the plot, no need to burn through a special effects budget just to deliver green or orange skin, it could result in a quality drop in, say, animal realism for a transformed Beast Boy or fake looking fire for example. It would cost alot to pay for every frame Starfire appears in to have cgi orange skin and make-up is probably comparable in price. That is hours in the make-up chair for Anna Diop everyday.
I think I remember reading an episode of the Flash cost about 1 million dollars, that’s like a $22 million dollar budget for an entire season (22 hours) of film versus $150 million for a 2 hour movie. Films get more money and more time whereas tv get far less time and money to complete their already constructed vision. It isnt DC or WB trying to sell you an “culturally improved” version of these characters, it’s literally “we cant afford to bring you an orange Kori, so instead we’re just going to focus on making her character interesting beyond aesthetics”

Zombedy, thank you for providing insight and answering my question. It’s just a shame that the show didn’t have enough money for make up. The time consumption of having to go through make up I figured was the main reason. As for cost I didn’t think it would be that much compared to something like CGI.

She would probably look really good if they would have spent the money. The outfits for Robin, Dove, and Hawk are spectacular which makes everyone else look bad in comparison.

Just wanted to add that make-up can also be a little risky and unpredictable. Theres a scene in 1989 Batman that has become kind infamous because you can see a big purple mark across Jokers neck. The purple on his neck was purple paint they had used to cover up some white make-up that had rubbed onto his suit. To fix it they could have grabbed another jacket which could have seen the same problem, or use the “scheduled reshoots” to film it again later on. Someone must have decided that the cost wasnt worth it, even with a huge budget and time set aside for this kind of specific problem. If that had happened on tv (which it probably does often) it’s a bit more of a monkey wrench because their schedules are much more constricted. I’ve also read that Commander Data’s make-up in ST:TNG got everywhere on set, basically requiring his own personal clean up team

@JohnOnyx115, two dollar hookers don’t wear fur coats (and even those aren’t cheap). They cover the goods and they can’t really make money. That is beside the point, if the actress playing Starfire (whomever it would have been) were dressed like the comics, people would still associate her with being a cheap hooker, so they did a better job with her dress than that.

You can keep defending it all you want she still looks awful. Did anyone call the teen titans animated show starfire a hooker?

Thanks for the info on the clean up crew from the awesome Tim Burton Batman movie. I can only imagine the complications of the stuff rubbing off on costumes as well as probably having to do another person in make up for stunt doubles.

@JohnOnyxx, that’s just your opinion. That doesn’t make it true.

Then we will just have to agree to disagree on this topic.

Oof. Its kinda apart of the story. Kory doesn’t know who she is, and who ever she was, clearly liked to dress like that. But no one can change your oppion about the costumes. Maybe she will change once she figures out who she is.

I also just wanted to add that Gar isn’t green completely either. Soo none of the characters are not human colors. Maybe dista just how they wanted to design her.