Could someone explain to me the significance of this panel’s reference to Grant Morrison’s All-Star Superman? I sat and thought about why King did that for at least half an hour. All-Star is one of my favourite comics ever, so I noticed the resemblance instantly. But what is the purpose of it? I refuse to think that’s just a simple nod to All-Star (even though I dislike his Batman run thoroughly). It feels deliberate. Does anyone have any theories? No matter how convoluted and absurd, all are welcome. 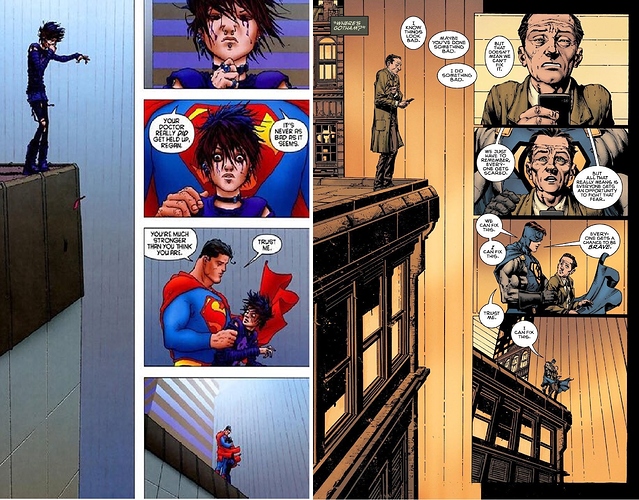 From a Comics Alliance Interview with Tom King: https://comicsalliance.com/tom-king-batman-i-am-gotham-interview/

CA: That, I think, leads us to Gotham and Gotham Girl. Obviously, the dynamic is a riff on Superman and Batman, to the point where you reference All Star Superman directly, which I think might be the most shocking moment in comics this year.

TK: I’m glad most people got it! I was hoping they would. It wasn’t exactly a deep cut, but it wasn’t the most obvious.

The actual whole story started with that moment. It started with me talking to the editors about the differences between Gotham City and Metropolis. We talked about how in Metropolis, Superman saves somebody, and they thank him, and then in Gotham, you can save someone and they go off and shoot someone immediately. We had that one image in mind.

Obviously, I’m a huge fan of All Star Superman, and especially that page. It’s the most inspiring five panels you can put in a comic, so I wanted to pay tribute to that. I wanted to say, “That’s a beautiful moment in Metropolis, but in Gotham, it’s a little different.”

Beware, my theory would be that King is attempting to reinforce the idea that Gotham is a Superman like hero not just in powers but in empathy and compassion. Then the turn the character takes becomes more shocking.

@AlexanderKnox Thanks! It’s great to know the intention. But I don’t think it works the way he meant to. At least not for me.

Beware had did it come off to you?