Why Aren’t the Batcave and Watch Tower More Secure?

Does it make anyone else sort of uncomfortable that neither of these places are very secure? I mean sure, they have their security measures but they’re constantly invaded. Joker, Bane, and the Court of Owls off the top of my head have invaded the Batcave and seemingly faced little resistance. As did the League of Assassins during Grant Morrison’s run.

Then we see Plastic Man’s wife get brutalized on the Watchtower, the HQ of the world’s strongest superheroes. And somehow nobody was around to stop what happened.

My question is, why are these places lacking in security?

Because they employ the same security firm employed by Engineering in Star Trek and the Viper bay in Battlestar Galactica.

How else is the drama or action going to start then? We need that element of surprise that the villains can give to throw off the JL or characters. It’s a bit overused in some cases but, you gotta start it up somewhere. This is from the perspective of writing the story. In the actual world of comics… maybe they need to upgrade to ADT lol

Simple, with all those diverse villains and other intruders we have it is impossible to be secure from all of them. Seriously, how am I supposed to keep Thinker out, ditch all my batcomputers?

Maybe The Batman needs to put a giant yellow key in front of The Batcave entrance to misdirect potential intruders. 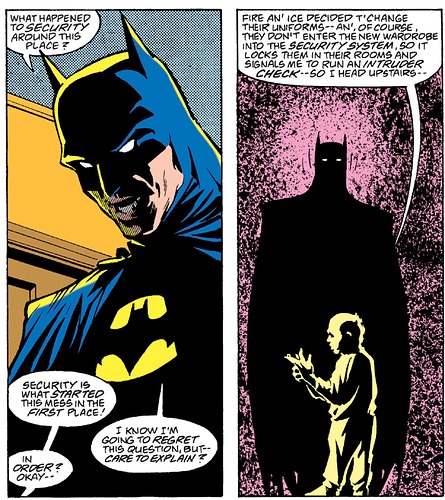 Well, the breaches of the Batcave were generally because they walked in through the front door because they figured out Bruce Wayne is Batman. the cave’s greatest security measure is this knowledge is not common to the bad guys in the actual DC universe. plus batman’s actual tech schematics tend to be in the Batcomputer under Batman’s best encryption and his actual technology behind massive safes. The watchtower…is in space, so that makes it fairly secure itself. Plus there tend to be a few league members on the station most of the time.

However, the only way to make these places more secure is if they are would be to add lethal armaments added to defend them. something the hero’s wont generally do.