Who's Who In Your Bat Family?

There have been so many incarnations of the Bat Family. It’s sorta become like mutants/X-Men in Marvel - too many members to count and not all fit timelines so neatly to put it nicely. Quite a few characters have even taken on more than one Bat Family mantle. If it were up to you who would be in the Bat Family and who would be who? Anyone not used either does not exist or not part of the team.

For me:
Batman (Bruce Wayne) - obviously a must. He started the whole damn thing. The only thing I would say is sooner or later Batman must die and rather having someone take the mantle I would rather see the fam take over in his stead.
Alfred Pennyworth - it’s ■■■■■■■ Alfred okay? There is no family without good ol’ Alfie.
Nightwing (Dick Grayson) - the first and former Robin (Boy Wonder) and my absolute favorite character. A must. After quitting as Batman’s sidekick and forming the Titans while in college he becomes Nightwing when learning Batman had replaced him. After graduating college, the Titans would disband for a short time to build their own lives and Dick would take over for Bruce upon his disappearance for a short time, training a new Robin and Batgirl with the help of friend…
Oracle (Barbara Gordon) - the first and former Batgirl would become Oracle after getting paralyzed by the Joker. An event that would cause then boyfriend, Dick to quit as Batman’s sidekick. Also the leader of an female hero team Birds of Prey.
Tim Drake - The third Robin and Dick’s other half to the Dynamic Duo. I chose Tim for this spot instead of Damian for timeline purposes. Plus having Dick bring in a new Robin, especially Tim who finds out their secret identities in Batman’s absence and having to convince him that Tim is worthy upon his return is just a better use of his story. And then having Tim ousted as Robin by the next person for not being choses by batman himself just makes it all the better. He would need a new name besides Red Robin though otherwise he will be a perpetual Robin who is not Robbin and it just doesn’t work.
Robin (Damian Wayne) - is there really anything to say? Batman finds out he has a bratty, entitled little prick who forcefully takes the mantle of Robin from Tim.
Batwoman (Kate Kane) - appearing in Gotham shortly before Bruce’s disappearance and brought in by Dick when he takes over as Batman for a little bit.
Batgirl (Stephanie Brown) - Barbara encounters Stephanie acting as Spoiler while in a hacking war against Cluemaster and makes her the next Batgirl.
Yes, Red Hood exists (no matter how much I hate the character). Really wish I coulda axes his character but his death alone is one of the most important stories in Batman mythos. He’s just not part of the team because he goes against everything Batman stands for. Huntress also exists but she’s Birds of Prey not Batfam.

Edit:
Thinking about my little timeline and version of the Batfam I’m gonna add Luke Fox as the new Batman after Bruce’s death. I think that’s a better use for his character.
Imma axe Cassandra Cain, Duke or “The Signal”, and “Blue Bird”

from existence. There’s already a child raised as an assassin who turns to the heroes with Damian. We don’t need another. As for Duke, while I am curious as to the goings on in Gotham during the day, Duke is absolutely the wrong character for that. Plus, his powers make no sense, his costume is ugly, and we don’t need another “former Robin” which I think is incorrect as he was never truly Robin. And I don’t like the Nightwing rip-off that is Blue Bird and just don’t think she fits.
Catwoman, I don’t see her as part of the Batfam considering she’s a thief. Like Batman’s whole thing is “No stealing. No Killing.” so I don’t really think she has a place so same boat as Todd.
Azreal, I don’t understand enough to even consider him or think about him existing so axed I guess…?
I think I’ve gone through just about everybody now.

Great thread. Rebirth had way to many Bat family members for a bit and still has some dead wait. I’ll try to keep my list short.

2.Alfred - Kind of a wise *** but very helpful. Bruce wouldn’t have nice meals and a clean cave if it weren’t for him.

3.Oracle (Barbara Gordon) - I don’t want her as Batgirl because there are so many other fit fighters ready to help Batman. Oracle is the one and only information superhighway.

4.Robin (Tim Drake) - My favorite Robin and a great detective.

6.Harold - He might be ugly and forgettable but he is a master mechanic and engineer constantly fixing and building new toys for the team.

Catwoman could be included or not depending on the phase of the moon, my mood, and whether the population of Scotland is an odd or even number currently.

Huntress (Helena Wayne) is from earth-2. She is friendly with normal earth Bat-fam but isn’t a part of it.

Azrael, Bat-wing, Batman Inc., the Outsiders, and Batwoman are their own things. They may call themselves “bat” or work for him but at the end of the night they are just lackeys and people who cash in on his symbol. They aren’t actually part of the family.

Still trying to figure Duke out. It doesn’t help that, just when I was warming up to him, he changed his name several times and got superpowers.

Bluebird was awesome but she hasn’t been in enough for me to count her.

Didn’t put pets on the list because I didn’t but they would be Ace, Alfred (cat), and the Bat-cow.

I feel like I’m forgetting someone important. I said Batman right?

I never even considered the pets OMG but Ace from Batman Beyond is my dog!

Terry! Maybe that’s who I was forgetting. He’s a different earth/time.

Yeah I love Terry! He’s my favorite Batman. But I think Beyond is a totally different thing and should stay that way. I don’t like Beyond being “the future” of the current timeline at all.

This is going to be a weird one. I’m going to say it’s an alternate future about 3 years from the current timeline (So most characters have grown as people) Gordon’s retired, Bullock’s Commish, and Bruce Wayne’s dropped the mantle to run for mayor to fix the system from the inside.

Batman (Tim Drake): Bruce has stated Tim will be the world’s greatest detective, he has adopted a similar fighting style and psychological profile, creates his own tech, and has proven time and again that he believes in what the Batman stands for.

Richard Dragon (Dick Grayson): Fact is, he is a better hand to hand combatant then Bruce. So it stands to reason that if Ricardo Diaz came looking for a fight, he would be thoroughly D*** slapped. So Mr. Grayson becomes the Dragon.

Robin (Damian Wayne): Not quite Batman yet, but with Dick teaching him compassion, leadership, and patience. He might not just be Batman, but a better Batman.

Batgirl (Cassandra Cain): One of if not the best fighters in the Bat family hands down.

Red Robin (Duke Thomas): He was used best in his “We Are Robin” days, to go back to that but with a designation to symbolize his leadership (Red), and backing from Batman Inc. suits him.

Oracle (Barbara Gordon), Black Canary (Dinah Lance), Huntress (Helena Bertinelli): As Batgirl, Babs was good, as Oracle she was considered the most powerful member of the JLA. From behind the computer she can be the central hub for Batman Inc, lead the Birds of Prey, and still suit up and throw down if necessary.

Batman- the Bat-paterfamilias.
Nightwing- The grown son who has his own family now. Spends much of his time with some incarnation of the Titans, but makes time for his original family.
Robin (Tim Drake)- Current Robin. Also has ties to some of the heroes his own age, but hasn’t branched off on his own to the extent that Dick has.
Oracle- Critical support, both for the Batfam and the League. She also organized the Birds of Prey, but that’s mostly her own thing. Acts as a mentor to Cass and Steph.
Batgirl (Cassandra Cain)- The team’s heavy. Is close to, and works extensively with, Spoiler.
Spoiler- The scrappy outsider who all but willed herself onto the team. Is close to, and works extensively with, Batgirl.
Lucius Fox- less directly involved, but plays a key support role, both in keeping Wayne Enterprises on track and providing technical expertise when needed.
Last, but most decidedly not least, Alfred Pennyworth. I’m sure I don’t need to expound on his value.

Those would be the key members of any Bat Family set-up I was in charge of. This list isn’t necessarily all-inclusive; Batman (and the rest of the team) likely have sources and allies (not always superheroes) in various places. I don’t like the name Batman Inc., but I do like the idea of Batman and Oracle recognizing and helping to organize non-powered “adventurer” type heroes from around the world into a loose confederation who share intelligence and occasional favors. These eight would form the core “family,” though.

The only character I’d want nothing to with is Damian.

Is it really fair to axe Cassandra because Damian was also raised as an assassin? After all, Cass came first, and is, in my opinion, a much better and more interesting character.

My Batfam squad shirt pretty much sums it up for me: 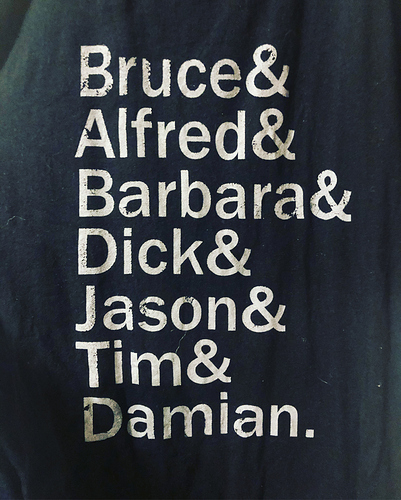 Wow omg I totally forgot Lucious Fox. He’d pretty much have the same role for me as well.

I thought it was. It sorta felt like a repeat and if I could only choose one I chose Damian cuz he’s the one I know most about. I hate him. But there’s something to be said about Batman having a son. On top of that, if I had used Cass she would need some sort of hero identity and I like Steph better as Batgirl, if there was no Damian then Tim would be Robin so I just sorta thought there wasn’t a space for her and went with Damian instead.

To each his or her own, I guess.

If you wanted Cass to have a different identity, you could have her follow in Dick’s footsteps and, entirely on her own intiative, transition from Batgirl, and identity given to her, into Black Bat, an identity she devised for herself (I don’t care for Orphan). That’s something I like to imagine her doing, eventually. I like Steph as Spoiler, though.

Also, Batman already had children before Damian. Dick was his first son. If you meant biological son, I don’t see why that’s more important.

I just really loathe Damian, while Cass is one of my favorites.

Yeah I meant biological. It’s not that I think it’s more important it’s just a dynamic I think is unexplored for the most part. I mean Damian has been around for how long now and Bruce has yet to act like a father. But he had 3 adopted sons before this??? You would think he’d of gotten better at this by now. That’s all.
It really comes down to I hate both Damian and Batman. Damian is insufferable but I believe nurture over nature which he doesn’t seem to get. Batman I can’t stand cuz he has no character/personality. He’s just blank all the time. Stale. So hopefully yknow getting Brice to act like a damn father for once would give him some semblance of a personality.