Who Would Win? Vampire Batman vs. Zombie Bane

With the release of the first issues of DC vs. Vampires and Task Force Z, DCUI is full of vampires and zombies this week. So our fight this week is between the vampire Batman from Batman: Red Rain and zombie Bane from Task Force Z! Which undead Gotham terror do you think would win this fight? Tell us your choice, below! 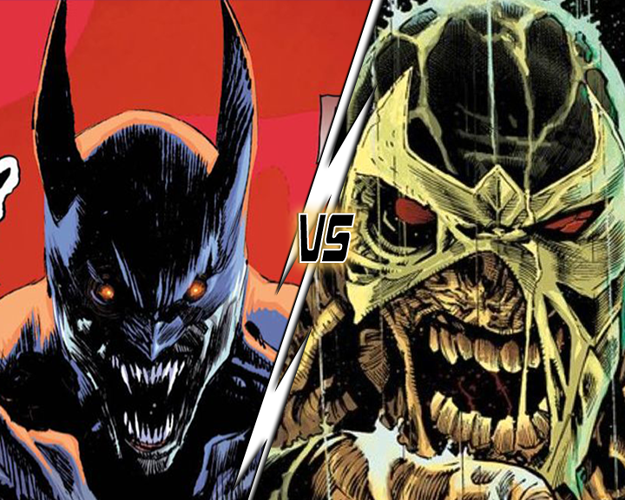 zombies don’t have blood, but vampires still have brains

I feel like this has to be have been addressed at some point in fiction, but would a zombie even be interested in attacking/eating a vampire? Vampires are dead, after all.

I went with Vampire Batman as a.) he’s Batman and B.) he’s a vampire. In my mind a vampire will have an edge on a zombie. I mean, in addition to the enhanced strength speed, and various other abilities vampires have, vampires still retain their intelligence. Zombies are just sort of mindless flesh eaters…

This is going to be a Long Halloween!

I have to go with Vampire Batman, because here’s the thing about zombies – they’re undead, which means they’re decomposing, and thus all of Bane’s strength and power will be pretty much negated.

Zombie bane will break the bat. And his leg may fall off while doing it

I was honestly wondering if Vampire Batman would even notice or care if his back was broken. I mean it would have to hurt, even if it would heal up.

True. And can vampire bats fly or hover? So who says he even need his legs if the back breaks

Well , half of the day, Bane would win because poor little bat vamp would be napping, so batvamp’s only hope would be a night time fight that finished before the night was over. A vampire has significantly more powers and regenerative abilities that zombies don’t have, and generally zombies lose physical integrity over time, so with those caveats. I am going to assume it is a fresh zombie bane and older batvamp, after a quick onrush and overpowering of bat amp by bane, batvamp recovers and leads bane slightly damaged. This continues for several nights till right before the last nights fight, Bane stumbles through the rotted floor at formerly stately Wayne Manor, and lands on batvamp’s coffin breaking it and exposing batvamp to the sunlight. Bane wins this time.