Who Would Win? The Penguin vs. Tony Soprano

Welcome to an extra special edition of Who Would Win! This month marks both the eightieth anniversary of The Penguin, and the release of The Many Saints of Newark on HBO Max. Since there are few, if any, criminals in his own universe who would make worthy rivals for Oswald Cobblepot, this week’s matchup will see him face off against one of the most infamous fictional gangsters of all time-Tony Soprano!

Styling himself as the Gentleman of Crime, the Penguin is one of the most dangerous mobsters in Gotham City’s underworld. In addition to being a criminal mastermind, he’s a formidable fighter in both armed and unarmed combat, often using a wide variety of high-tech umbrellas.

Tony Soprano is first a capo and eventually the street boss of the mafia family that bears his name. He is also brilliant and devious, skilled with both his fists and guns, and extremely ruthless.

If these two mob bosses were to trade blows (or bullets), who would be the last one standing? Tell us your choice and why, below! 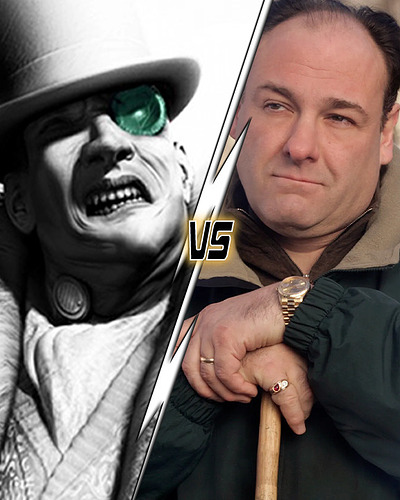 That doesn’t look like James Gandolfini, or his current in-theater/on HBO Max self…

Nevertheless, Mr. Cobblepot got my vote.

@Green.Lantern If we’re initiating face-offs with DC and non-DC characters who have current and upcoming content on HBO Max, will there be an Aquaman vs. Duncan Idaho (from Dune) bout?

Jason Momoa plays both in LA, so he’d win in any event (and really, Momoa winning is worthy of a plate of Idaho-grown potatoes, I find) but it’d still be interesting to see how many would pull for Paul Norris and Mort Weisinger’s creation vs. Frank Herbert’s creation.

That doesn’t look like James Gandolfini, or his current in-theater/on HBO Max self…

It sure looks like Tony to me. I don’t know what you’re talking about

The Penguin all the way! I can’t wait to see The Batman, Colin Ferrell may very well be my favorite actor to play The Penguin.
Now let’s look at the weapon, Penguin got it easy when it comes to his Umbrella, All Penguin gotta do is point that Umbrella at Tony, and he’ll be on the ground before he pulls out a gun!

That’s a great suggestion, @Vroom! I’ve been looking forward to Dune for a while. I can’t decide if I should reread the book first or not. But a Jason Momoa vs. Jason Momoa fight definitely sounds exciting.

Normally I just focus on who would win in a physical fight, regardless of who I like more, and Oswald’s usually not too skilled in that area. But I’m also not about to vote for a non-DC character here, so Penguin all the way!

It sure looks like Tony to me. I don’t know what you’re talking about

The Penguin easily. Tony is good at being a mobster, but The Penguin is a supervillain with all these trick umbrellas!

The Penguin, he has better killing implements and henchmen. Though if it was mano on mano, I would have to go with Tony.

But I’m also not about to vote for a non-DC character here, so

This maybe my deciding factor

the penguin survives hanging out with Joker, and a murderous Red hood. I’d say he’s pretty hard to beat

I could see a scenario where whoever loses ends up working for the winner. I would think they’d both realize how useful the other one could be.

Pengy babbie, got an umbrella for very occasion.