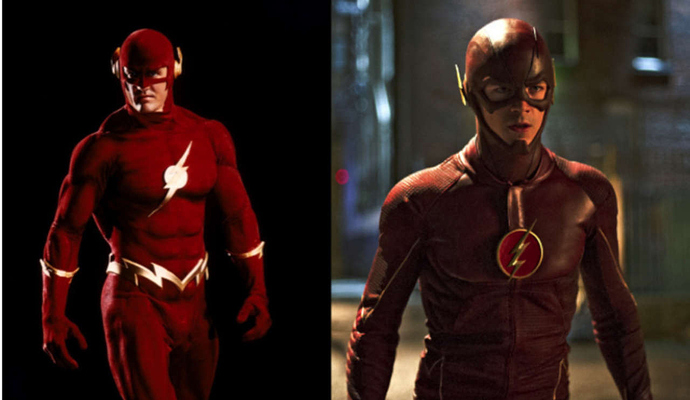 In honor of the 30th Anniversary of The Flash 1990 TV show, starring John Wesley Shipp, we decided to have the 2 Flash TV show Barry Allen’s go head-to-head in the ultimate Flash battle.

Let us know who you think would win, and why!

I think 2014 has better training

I’d say the 90s. Based of crisis he new more about his powers and has more experience.

But if counting strictly him in his show them 2014 would win.

90s had more confidence and an overall better additude twords the power and responsibilities of the speed force… Just my opinion having watched both.

Wow… Thank you for this match up! This is a tough one!

I mean c’mon! John Wesley Shipp is The Man!!!

I love them both. So glad they brought John Shipp into the new series. I love both costumes, but always thought the 1990 version was so very “comic-book-looking”, if that makes any sense at all. (Which Was Amazing). But the new costume is very cool too.

It will always bother me that the 1990 show didn’t get more seasons. I have read that it was aired opposite The Cosby Show and The Simpsons which were big hits at the time and that contributed to its cancellation.

Ship wins. He is much smarter and figures things out for himself. When battling Trickster he found out how to fool him. Second Barry needs a team of work place proximity acquaintances to explain it to him.

The question is Flash vs. Flash, not Tina and Flash vs Team Flash. Old fighters beat young fighters. They are more ruthless.

well given that 90’s flash learned how to drain speed off another speedster something that not even Reverse flash can do, I would say 90’s wins. I love flash 2014 but he is still really a novice when it comes to using his powers, well the 90’s flash has learned how to use them better by the time he was captured. however, flash 2014 definitely has the cooler suit.

The 2014 flash literally went into the speed force itself and came back out faster than any other speedster by a lot. he learned to manipulate the speed force to create solid lighting. he stopped not one but 2 singularities with his speed. he was able to phase an entire train full of passengers through rubble.