Who Would Win? Shining Knight vs. Azrael

The first issue of Dark Knights of Steel has arrived on DCUI, which I’ve been eagerly awaiting (I am a huge fantasy fan). Our fight this week is between an actual medieval knight and a one-time Dark Knight-Shining Knight versus Azrael!

In a showdown between Sir Justin and Jean-Paul Valley, who do you think would be the last one standing? Tell us who you think it would be and why below! 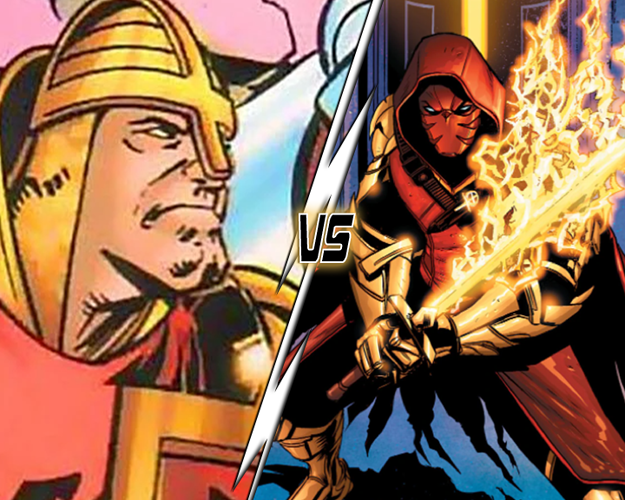 I pick a Shining Knight, sound like he’s a hero from Camelot who work for King Arthur!

I’ve always liked knights, and King Arthur, so it’s hard for me to pick against one.

I went with The Shining Knight. He’s one of King Arthur’s knights for one thing. For another, he’s clearly the good guy. I know it doesn’t work that way in real life, but I like the idea of the good guys always winning.

Azreal mostly because of bat bias

So, this was a hard one. I really had to do my research again for this one. I have a reason for picking who I did

Azrael: He is a fantastic near perfect warrior, especially after undergoing Mothers horrible conditioning and training and an expert swordsman.He has also been trained by Batman, and filled in for Batman when he had his injurys from Bane. He was trusted by Batman. Also, Azrael has the “Wrath Of God” ability that that produces awe and visions in the mind of his victims.

Shining Knight: Has immortality, granted from the Holy Grail. He has magical weapons and can produce spells and has control over animals. Shining Knight is able to weild Excalibur, making him a Champion Of Camelot. He has experience fighting alien and demon threats.

So, even though Azrael is in my top 30 favorite characters, I’m gonna have to go with Shining Knight on this one, mainly because of the sorcery.

Oh so not this shining knight…then ill switch my vote

I feel like Azrael (or any bat-family character) would be hard to beat, but having sorcery-related powers would give just about anyone a nice advantage, honestly.