Who Would Win? Shazam Vs. Brainiac

This week’s brawl is between two of the strongest characters in the DC Universe-Shazam vs. Brainiac!

When the orphan Billy Batson encountered an ancient wizard at the Rock of Eternity, he was granted mighty powers, including immense strength, stamina, speed, immortality, and the ability to generate and manipulate electricity. It also allowed him to transform into an adult whenever he said the word “shazam”.

Originally from the planet Colu, Brainiac is a twelfth-level intellect obsessed with hoarding knowledge. His powers and abilities include telepathy, telekinesis, technopathy, energy blasts, healing, flight, and superhuman strength and durability.

If these two powerhouses were to face off, who do you think would win, and why? Let us know, below! 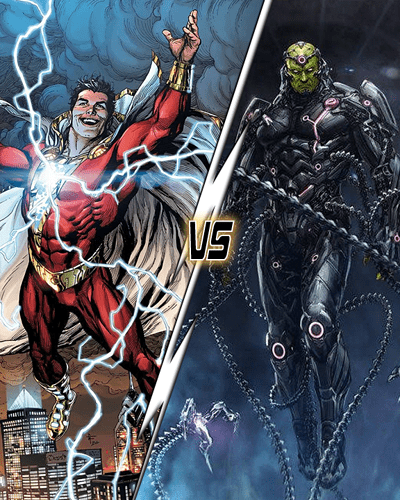 I pick Captain Marvel, cause with lightning ability, I think he can destroy Brainiac and overcharge his computer by destroying it as well.

You just convinced me to switch sides lol

Nah, even the Wisdom of Solomon can’t help Shazam out against a twelfth-level intellect. If Brainiac is going up against Shazam, he’s not relying on primitive 21st century magic-lightning-prone technology. He probably just bottles Billy before Billy knows there’s a fight to be had. If we allow that Billy is already in Shazmode, he gets easily distracted by the adorable Koko, and is promptly bottled.

I’d say Shazam. Brainiac is powerful both brain and brain but I feel Shaz will out smart him with his kid Brian thinking of stuff so dumb the Brainiac never thought of it.

Brainiac would ride Shazam’s lightning into a terrific defeat.

Shazam is a kid in a man’s body that sometimes acts like an impulsive child.

Meanwhile, Brainiac has subjugated entire worlds, species and their respective defenses, all in the name of “input”, as Johnny 5 of Short Circuit fame would say.

Brainiac will lay waste to whatever obstacles stand in his way so that he can obtain more knowledge, while Shazam would stare at him in horrified awe, then call up to the Watchtower and say “Uh, guys? Can someone come down and help me?”

The twelfth-level intellect wins this one.

Depends on how many surge protectors Brainiac has…

Brainiac bought out Incredible Universe, Circuit City and Fry’s Electronics’ entire remaining supply of surge protectors before they all went out of business, so he’s pretty well stocked from here to Takron-Galtos on 'em.

However, Brainiac likely couldn’t rock form-fitting spandex the way the first live-action Shazam could, so Billy Boy has that advantage over 'ol green jeans.

I like the argument that he would win by doing a dumb thing only a kid would think of, @NYJt3!
I also like the idea of lots and lots of surge protectors being able to neutralize Shazam’s abilities.

I’m sorry, but until I see Brainiac train or test out powers to a Queen song like Shazam did, then my vote goes to the only candidate that has. I will happily watch the og Captain Marvel test out powers while Queen serenades the world. Yes. No questions asked. I like to think Billy has the power of Shazam and Freddie Mercury on his side in this kind of battle!

As popular DC TV shows/movies have given us… All things Kryptonian are susceptible to magic. Since Shazam is a magical being (or his powers come from magical beings), it is no contest. Shazam wins!!

You make a very wise point. It’s not smart to root against the side that has Queen as part of their training regimen.

I’m pretty certain Brainiac has the complete works of Queen cataloged, analyzed, deconstructed, and rebuilt several times over. He may well have manipulated DC’s history to ensure Queen rose to prominence in order to inspire Billy to rise against him so that Shazam’s swift defeat discourages further resistance. (Surely it’s no coincidence that Brainiac’s first appearance in our world was the same year Freddie Mercury formed The Hectics!) Brainiac likely has Freddie Mercury in a bottle all to himself, repeatedly forced to repeatedly sing Machines every time Vril subjugates/collects a new population.

Brainiac is Coluan, though. Am I missing something? I am, aren’t I.

Oh man, I can’t make up my mind… I think I’m going to have to go with Brainiac. I’m a big believer in intellect winning the day.

To be fair, he very often loses, is too stubborn to die, then goes back and wins the next time. #learnfrommistakes

Ohhhhhh, if DC ever has free time, they should do a thing where we vote in a speculative stadium and then they actually do a little 30-second video of the clash.