Who Would Win? Red Tornado vs. Cyborg Superman

In a face-off between the synthetic Justice League hero and the astronaut turned deadly foe of Superman and the Green Lantern Corps, who do you think would emerge triumphant? Let us know your pick and why, below! 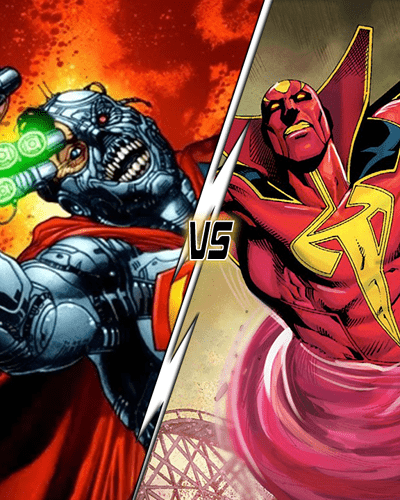 Red tornado. Mostly do to my bias towards him.

I voted for Red Tornado for two reasons. A ) He’s the hero. And B.) It wouldn’t feel right voting for an enemy of the Corps.

Cyborg Superman, he can control Technology and probably freeze Red Tornado’s body trapping his elemental self which is his advantage in this battle.

In my opinion, Cyborg Superman. For a villain I think he can beat Red Tornado.

I just read the first volume of the collected George Perez JLA. There’s a two-part story in it about Red Tornado and his origin. He has a complicated backstory! So does Cyborg Superman, actually.

Looks like my vote just tied things up! I’m not an expert on either character, but I’m pretty sure Cyborg Supes has this one in the bag? He has some level of technokinesis, which would be a problem for RT, plus the powers of Superman? easy win.

Hate to use same reason twice in a row lol. But, like Eradicator was able to become programming ,& take human’esque form. Henshaw takes that to an entirely new level. He can be turned into liquid, & sneak inside a circuit on the moon & survive. He’s like a water Bear (Tardigrades).

Ma Hunkel would beat them both.

I want to give it to Red Tornado, because has a figure in the Super Powers and JLA lines, while Cyborg Superman never got his Kenner/Hasbro era dues, sadly.

Also: Cyborg Superman had a sweet entrance in Dark Crisis #2, so he’s got that going for him. Which is nice.

I’m giving it to red tornado on one point. If they fought the fleshy parts of Superman would be his downfall. #suporttheuprising