Who Would Win: Polka-Dot Man vs. Ratcatcher

Abner Krill (first known as Mister Polka-Dot and later taking the name of Polka-Dot Man) was a criminal who focused on dot and spot related crimes in Gotham City. He’s able to turn the spots on his costume into a wide range of devices, including strange weapons and even vehicles.

Also hailing from Gotham, Otis Flanagan began his career as a literal ratcatcher. Discovering he had the ability to communicate with and train rats, he used hordes of rats to wreak havoc on the city.

If these two Suicide Squad teammates and Gotham villians fought, who would be the victor? Let us know who and why, below! 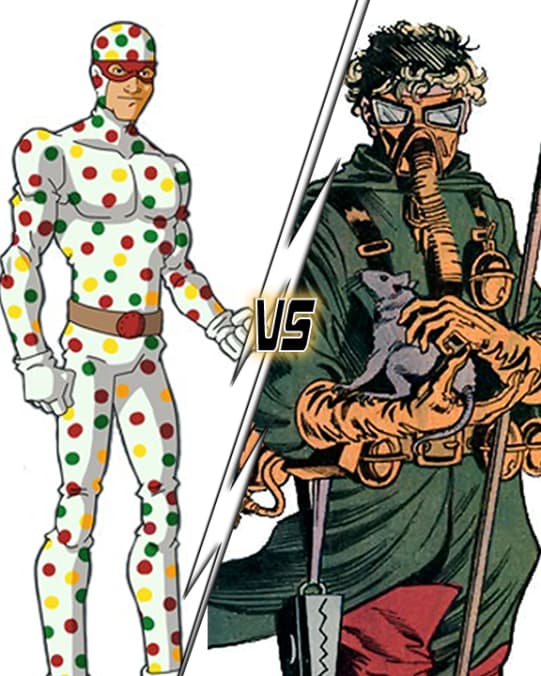 I like that logic! One of my favorite minor characters was Paintball, from Stars and S.T.R.I.P.E., mostly just because he’s colorful and visually interesting. As far as I can tell he’s only ever been in three issues total, though.

Polka-Dot Man all the way. Ratcatcher is just a second rate Black Rat, waiting for Mouse to come along and be cooler than them both. He’s more information broker than fighter. PDM will just lay a cheesy flavored polka dot to distract the rats, then drop any type of weaponized dot on Otis and the game is over. I think a fireball would look magnificent in a sewer fight, but if this is above ground, I’m imagining a comical “weightlifter” dot with “1000 lbs” written on it.

(In James Cagney’s voice) Ratcatcher is a dirty Rat!

Ratcatcher. The rats will just ride the dots and use it against him.

I find rats terrifying, so I’m going with Ratcatcher. I also feel like I could take Polka Dot Man.

I feel like if Ratcatcher wanted to, he could have a diseased rat sneak into your house and infect you with something horrible. That’s if he plays the long game, which I’m not sure that he does.

My guess is to go with Polka-Dot Man because he thinks he’s a superhero.

Although probably not for long…