Who Would Win? Poison Ivy vs. Swamp Thing

Near the end of April each year, we show our support for the environment and the planet on Earth Day. This week’s fight is going to focus on the two greatest defenders of nature in the DC Universe-Poison Ivy and Swamp Thing!

Dr. Pamela Isley is a brilliant botanist who can control plants, release mind-controlling pheromones, and poison with her very touch. After the scientist Alec Holland was murdered, the monstrous creature known as Swamp Thing rose up in his place, and can control all plant life on Earth, in addition to being incredibly strong.

Both of these characters are extremely powerful, dangerous, and willing to do whatever it takes to defend the environment. If they were ever to go up against each other, who do you think would win and why? Let us know below! 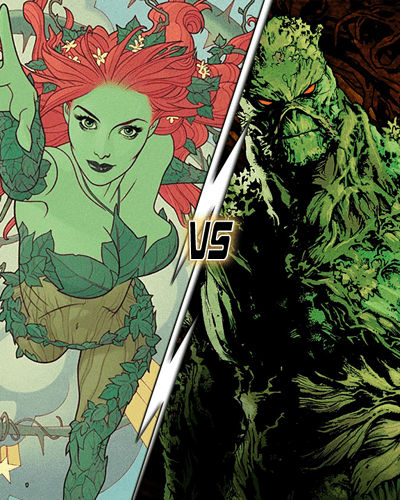 This is a question?

Absolutely…I would love to see a series about these two

I would love to see a series about these two

Hmm… Is this a competition like a pure fight dynamic, arm wrestling, poker match, dance off? I feel like they both have strengths and weaknesses depending on what we’re going for.

Or maybe it’s a contest of who can threaten people to pick up the most litter? I have a feeling that Swamp Thing could be more influential overall, but Pamela does have an advantage because she can manipulate people to get onto her side. And people are the most destructive to the environment. So Poison Ivy can probably stop the most pollution.

Oh my goodness this is such a hard pick! It’s like choicing @Pretty.Poison.Bombshell or @Alec.Holland! I really like them both as a same.

Poison Ivy! Sorry @Alec.Holland, she got me under her spell!

@THE_OneAndOnly_Official_Batman That would be great, having a series about the two of them. The two of them could team up with Terra-Man to form DC’s version of Captain Planet’s Planeteers.

@iJest You make a good point. As far as pure power I feel like Swamp Thing might be stronger, but Ivy could probably have more allies.
@ReaganFan78 I was wondering if anyone would make a moderator connection to this matchup.

I think Ivy could win but it would be kinda in a Batman-like way; meaning that she’d need some prep time. Without prep, she’d eventually be overwhelmed physically. I do think she’s the better scientist in this area purely because she still practices her craft often. And science needs to be done constantly in order to maintain a level of expertise or to be competitive.

Swamp Thing doesn’t need to remember equations so much anymore when he can simply create what he needs and modify his body practically on command. That and he’s simply not someone who can be taken out in a physical confrontation unless the brute force is rather obscene.

If anyone could put him down for the count though… it would be Ivy but she’d need the element of surprise or a well thoroughly thought out plan of attack with built-in backup plans. But in a general sense, Swamp Thing takes it under normal conditions with an added advantage.

And people are the most destructive to the environment.

But people are helpless if the environment fights back.

Swamp Thing is more powerful, but thats not why he wins. He wins because he’s everything that Ivy is fighting for. She couldn’t bring herself to fight against him.

I can’t choose between my plant people- I

them both! Okay, now that I got that outta my system: I like to think they wouldn’t fight each other, because they’re generally on the same side/are the things they typically protect.

They both have strength (and weakness)—a win for either entirely depends on the circumstances. (If there’s planning: Ivy all the way!) Ivy’s got a passion, that could be a big advantage, so I’m going w/ her

Haven’t we seen this situation recently? I think in the end it would be discovered that they were manipulated into battling each other when in fact they had a common enemy that needed their sole attention. They would team up, defeat their foe and move on respectful of each other. For reference see Kong vs. Godzilla. They may fight each other and lose battles but in the end they would win the war.

This is hard. But I’ll say swamps do to his deeper connection to the green.

I’ll have to go with Swampy, he is the entirety of the green, and Ivy is just a small part.

He’s made of the stuff she manipulates how could he win?

I think having both the green and science helps her tho.

Depends, but it’s kind of an advantage.

Well remember poor old Alec was a scientist as well.

I can dig it but she’s not made of the green so he can’t control her. But she can make them vines around his neck get a little tight then nighty night lol.

He doesn’t work in a lab anymore tho, so she could have a some kind of chemical weapon, maybe? She can technically control him, I suppose, but again—all depends on the circumstances.

I genuinely don’t believe either of them would hurt the other, because of what & who they are.

What counts as a win here anyway?