Who Would Win? Poison Ivy vs. Deathstroke

Our matchup this week is between two of the deadliest and most dangerous villains in all the Multiverse (who both happen to be starring in comics arriving this week): Poison Ivy and Deathstroke!

Poison Ivy’s control over plant life and scientific knowledge make her one of the biggest threats in Batman’s rogues gallery. Deathstroke is a super-soldier with enhanced physical capabilities, is skilled with just about any weapon imaginable, and is also a foe of Batman (and Superman, and the Teen Titans, and every other superhero).

Who do you think would win in a matchup between these two, and why? Let us know , below! 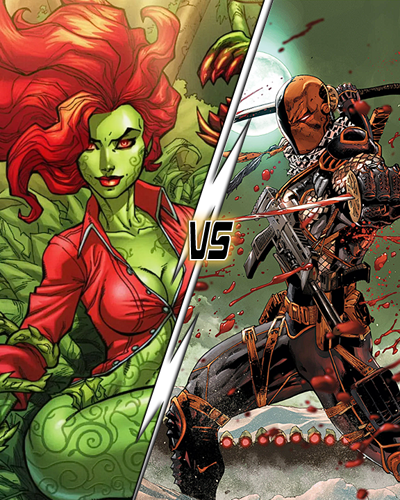 Easily Ivy. Sure, Deathstroke has skills, but Poison Ivy can control plants, and is smart as hell. Deathstroke is not going to beat her.

I will also vote Ivy. Plants can be sharp for slashing like swords. Vines can whip, strangle, trip, hang an opponent upside down. Plants can release toxins. Her abilities are a lot to go up against.

She is very intelligent and knows how to use her abilities to their highest potential.

my former best friend always does something stupid at the end and losses.

I am wiping out the winner either way.

Ivy is basically a force of nature, Deathstroke. Old plan for her and defeat her, potentially, and his healing factor might counteract a lot of her toxins, but I am going with the Green eventually winning out.

I’m going with Ivy, her control of plants can do some damage.

Right now I’m stuck in a Poison Ivy level in Arkham Asylum game, and boy is she tough!

Deathstroke, those swords are gonna cut through anything she throws at him and she’s not gonna be able to kiss him since he’s way to much of a sigma to let a woman touch him.

Poison Ivy is who I selected. I think her abilities would eventually crush Deathstroke, but I think it would be an even match for a large chunk of the fight.

Welcome to the community

As a huge Deathstroke fan I have to say that Ivy would definitely beat him.

Yes, we can all give deathstroke his credit for being a deadly killer, but we’ve all seen Ivy do so much when she is connected to the greeen

she is not your ordinary assassination mission to run and gun on, she is Mommy nature.

She will always have her fortress to get through. Deathstroke will for sure fight to his death, but I dont see Ivy having to move an inch to deal with him

thank you for letting me participate in this (:

Sure about that remember how his daughter ravager? was born he doesn’t seem to have a problem with pretty women

This isn’t even a question to me.

Depends on the given scenario:

Weapons, powers and everything in-reach allowed?

Deathstroke will get dropped like a sack of dirt.

No powers, weapons or anything of the sort allowed?

“Time to trim the foliage.”

Slade can withstand Batman hand-to-hand, and last I knew, Ivy has never successfully rumbled with Batman without using her powers.

Now, an Ivy thats as well-trained as Deathstroke?

SN: I would love a Poison Ivy/Deathstroke mini.

Ivy knows a think or two about manipulating powerful men, even smart ones, and it’ll only take her a few minutes to calculate the best way to defeat him: Play to his sense of being the best by dramatically being “killed” and then regrowing and removing his heart with one well-placed giant thorn strike.