Who Would Win? Penguin vs. Bruno Mannheim

Our matchup this week is between two of the DC Multiverse’s greatest criminal minds-the Penguin and Bruno Mannheim!

Who do you think would win in a fight between these two fierce felons? Would it be the bird loving Gotham kingpin (and star of this week’s Ultra release Batman-One Bad Day: Penguin)? Or the leader of Intergang and frequent foe of Superman! Let us know who you think it would be, below! 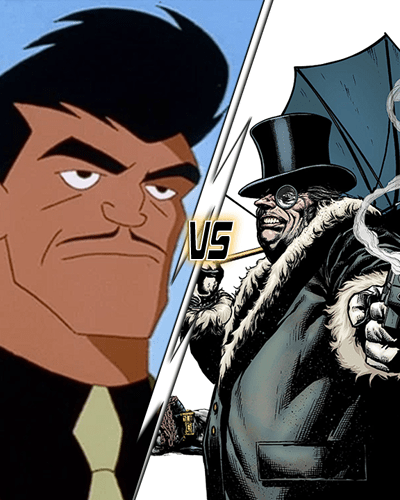 That would be a very different fight.

I’m not sure I think of Oswald as a brilliant thinker or strategist but maybe that’s because I don’t read all that much Batman solo titles, considering how much DC I’ve read and consumed via animation and live action (which does, by default, include plenty of material on Bruce and Gotham). As for Bruno, I’ve always thought of him as more modern-day comic relief, especially if you compare him to some of the criminal crime bosses that Clark faced in the Silver Age, where sometimes some investigation by Jimmy or Lois was helpful or even necessary for Superman to bring them down.

They should have a new DC Comic called the 13 Warrior’s of the Astrology Plains of no return where the Astrology Spirit being of what was supposed to become the 13 Astrology Month’s Sign is returned after his eternal imprisonment and brings the other 12 Astrology Spirit Being God’s to life to take over and destroy and Remake earth in the ways that they dreamed of in thie the Ancient past now Wonder Woman Dianna Prince one of the 13 Warriors set in history to become the only ones who can imprison the 13 Astrology God’s Being most band together and begin bringing the other 12 Warrior’s of Astrology Supergirl, Batgirl, Zatanna, Black Canary, Batwoman Kate Kane, Fire, Ice, Terra, Cyclone, Doctor Light Kimiyo Hoshi, and also Nightshade to stop them together and they also find out Geo Force, Thunder, Lightning, Shazam, Mary Marvel, Atom Smasher, Black Lightning, and also Black Adam are all for some odd reason the cause of why this occurred in the first place to release the Greek Gods Monster Tiefan!

You didn’t invite me, so I crash! Love this poll, I think you know who I voted for @Green.Lantern.

Have I ever told you that Penguin is my all time favorite Villain for Batman, I actually have 2 statues of him.

Penguin has always been a favorite of mine. Either my brother or I had a figure of him when we were kids, so I’ve liked him from a young age.

I had to go with The Penguin. Aside from everything, he has an array of often deadly trick umbrellas. Not to mention he has taken on Batman, who I think is more of challenge than Superman (not that the Man of Steel is anything to sneeze at).

I can really imitate Burgess Meredith’s Penguin really good, just ask @Alec.Holland, he heard me do it a year ago on Discord.

He would. Manhattan is vulnerable to manipulation

Here’s the thing – Mannheim is a goon, a henchman at heart. On his own he doesn’t really have a lot of power and authority the way that the Penguin does.

That said, the entity that Mannheim is a henchman for is Darkseid, ruler of Apocalyps, the Devil of Devils, etc., and that gives Mannheim access to a lot of powerful technology and access to the evil New Gods themselves.

So I guess it depends on if Mannheim is on the outs with Darkseid or not – and honestly, if he is, Mannheim is probably going to be horrifically tortured by Darkseid far worse than Penguin could ever pull.

I pick penguin. He would just use one of his umbrellas to send Bruno to Mars…

One is a childhood favorite, who has figures by Kenner, while the other is a Steamroller of great Christmas music.

Can I vote “draw”

No, you can choose. Just put your toys of them in a fight and see who wins.

Bruno Mannheim has no merchandise, so by default, it would seem P-en-guin wins.

I do think Bruno could be tough, but he usually seems to be more of an underling to Darkseid than a threat on his one, at least from what I’ve seen.

I just finished watching Gotham… I know what Penguin is capable of. I don’t know who this other guy is though.