Who Would Win? Matter-Eater Lad vs. Parasite

Tomorrow is Thanksgiving here in the United States, so our fight this week is between two of the greatest eaters in the DC Universe-Matter-Eater Lad vs. Parasite!

Tenzil Kem is a Bismollian, a race whose food was turned inedible and developed the physiology to eat and digest any matter. Joining the Legion of Superheroes and taking the name Matter-Eater Lad, his metabolism also grants him superspeed.

Rudy Jones was originally a janitor in Metropolis. A freak accident changed him into the monstrous Parasite, and left him consumed by a constant craving for energy. He’s able to drain and use the life force, superpowers, and knowledge of whoever he touches.

If these two powerful eaters came to blows (maybe over the last turkey leg), who would win? Tell us who you think it would be and why, below! 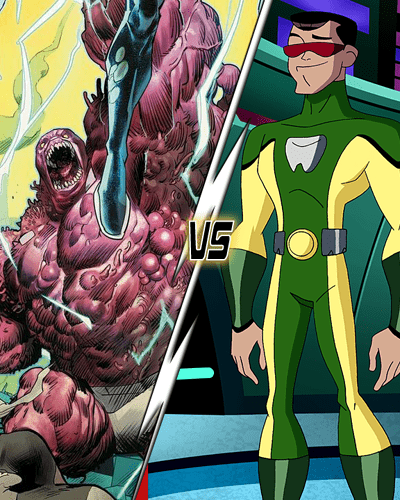 Tenzil’s speed would help him avoid Parasite, but I don’t see his eating abilities allowing him to beat Parasite.

This was my first thought actually

I’m glad I’m not the only one

Matter-Eater Lad would win by depriving Parasite of energy with his super speed.

Welcome to the community @_Bruce_Wayne !!

Welcome to the community @elliotortiz5 and @_Bruce_Wayne! Please let the moderator team know if you need anything.

Matter Eater Lad ate the Miracle Machine, I don’t think the writers know what he is capable of now:)

Welcome to the community @lar_gand!

Thanks for sharing your thoughts on this show-down - feel free to let the moderator team know if you need anything.