Who Would Win? Krypto vs. Ch'p

This week’s fight is yet another chapter in the long struggle between dog and squirrel: Krypto vs. Ch’p!

Krypto is a Kryptonian dog and has been Superman’s pet since he was a child. As a Kryptonian, he has many of the same powers as Superman, like super strength, flight, invulnerability, super speed, heat vision, freeze breath, x-ray vision, superhuman hearing, and a healing factor.

The Green Lantern of Sector 1014, Ch’p is a native of the planet H’lven and closely resembles an Earth squirrel. As a Green Lantern, his power ring grants him a wide range of abilities, including the ability to create hard light constructs, force fields, and flight.

Given that I really like both dogs and squirrels, I would hate to see these two come to blows, but it does feel like it’s only a matter of time before they clash in a battle that will no doubt bring the entire DC Multiverse to ruins. Who do you think would win that fight? Let us know who and why, below! 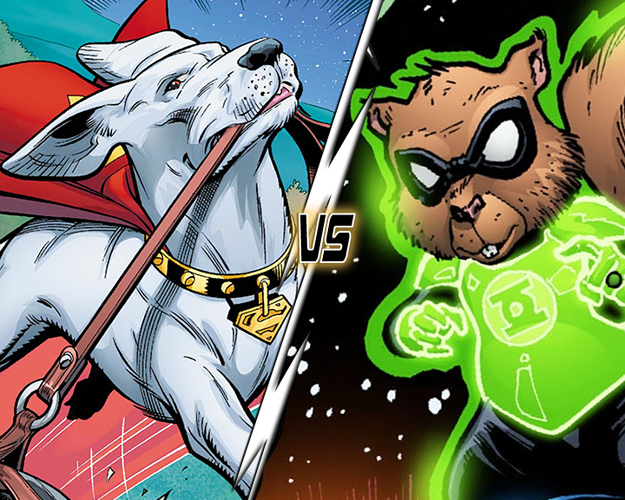 If Justice League: War shows anything, it’s that Kryptonians will always beat Lanterns

You know what I’m going to say. THEY WOULD TEAM UP.

That is something I would love to see.

Very hard but I have to go with Ch’p. Krypto in the end is a like a dog with kryptonian abilities. Ch’p (if I remember right) is an intelligent species that just happens to look like a squirrel. So I think Ch’p can outsmart Krypto.
(Also lantern bias

Maybe you could pass on to the powers that be that I will edit anything @Vroom wants to write if the supply the folks with pencil, ink, and colors?

Let’s go to Burger King and hash out the details.

Did you know that you can get a refill on your drink at Burger King?

Richie Cunningham: “It sure is!”

I think Krypto would pounce on Ch’p, then snap his neck with his enhanced by Earth’s yellow sun jaws.

After, Krypto would be a Green Lantern.

Does anyone else think that there is a possibility that Krypto would just become overwhelmed at the sight of a squirrel and go berserk, forgetting to use his powers?
There are many layers and things to take into consideration with this fight.

Even in the old Superboy stories, when Krypto had thought balloons, his reasoning was primitive.

It could have gone the other way.

In the old days, when @MissInkBlot gave weekly prompts, there was an elimination bout storyline.

I had the final two as Spectre vs Krypto.

Spectre declined to fight, finding no evil in Krypto.

Lois Lane asked, “But Spectre, what
about his vicious assaults on Ch’p and Streaky?”

“I asked him. He told me Squirrel and Cat. Seems logical to me.” 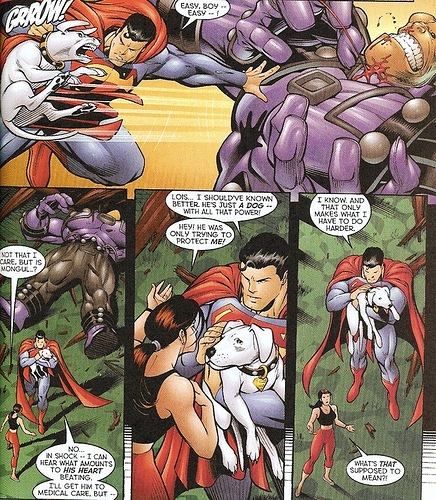 I rest my case.

You know what I’m going to say. THEY WOULD TEAM UP.

That is something I would love to see. I think I’m just as excited about this as I am any other upcoming comic movie.

Gotta go with @TheRealDetectiveChimp on this one. Although his animal fury might well be more than the higher intellect of C’hp could handle. Staying in the same arena of conversation, I wonder if Krypto and Ace, the original Bat-hound ever met? Hmmm, I’ll have to put that to HCQ someday. I’m more excited for this than I ever thought I would be for a movie about the pets/animal characters of the DCU.

Remember: Never judge a book by its character, MTV is dead and never judge a movie by concept alone.

I hate to say this but Krypto is a dog (with Kryptonian powers). Ch’p might look like a squirrel but is actually an alien with the most powerful weapon in the universe… Krypto is a great dog but Ch’p would win this easily to me.

If Justice League War says something then the opposite is true.