Who Would Win? Huntress vs. Harley Quinn

Our fight this week is between two of the most famous residents of Gotham City- the Huntress and Harley Quinn!

Helena Bertinelli was the daughter of one of Gotham’s most prominent mafia families. After witnessing the murder of her entire family as a child, she became a dangerous and often ruthless vigilante. In addition to being a highly skilled markswoman, she has peak mental and physical conditioning for a human and is a skilled gymnast and hand-to-hand fighter and martial artist.

Harleen Quinzel was once a psychiatrist in Arkham Asylum who was driven insane and joined the Joker as his villainous sidekick. She eventually broke free from this abusive relationship, and has even become an antihero. Her psychiatric training often gives her a unique insight into the minds of her opponents. Her combination of gymnastic skills, agility, hand-to-hand fighting skills and total unpredictability make a dangerous foe.

If these two formidable and often violent Gotham fighters were to face off, which one do you think would win? Let us know who you think it would be and why, below! 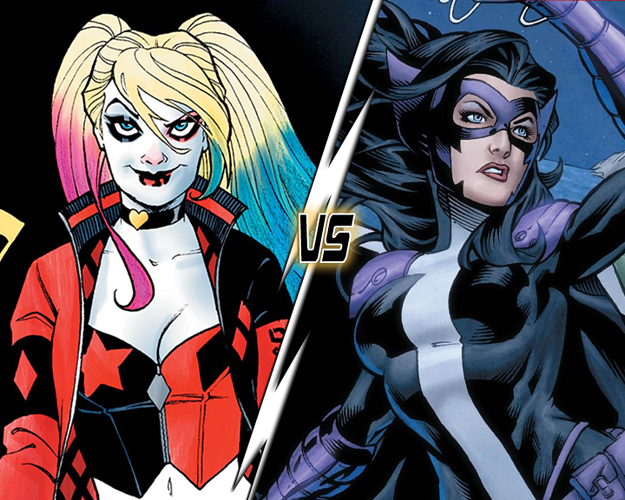 Oh nice one, knowing how popular Harley is, I voted for The Huntress!

Actually trying to win? (As opposed to Ms Covered-in-weapons-but-not-fighting-back-against-the-dangerous-lunatic-until-she-stops) Absolutely Helena. She might underestimate Harley at first, but not long enough to lose the edge.

Huntress for sure! She’s a great battler! The Iron Owl!

This was a rough one, but in the end, Harley’s inability to think things through would be her downfall

I know the Huntress is tough and a very lethal lady when she needs to be. But she has no special powers, and Harley is no slacker in a street fight. Harley can think outside the box, way outside. Her unorthodox style of combat might be too much for Huntress to handle.

Huntress turns her into a pin cushion.

They made Heroes in Crisis so they are both wrong at the same time (somehow).

As one of the only three people who liked HiC, I understand, but disagree, with the sentiment.

I loved HiC. I don’t get why people hate it so much.

Two of my fave characters so that made the decision that much tougher, but I’ll give Helena a slight edge.

And I too, enjoyed Heroes in Crisis.

My problem with it was the explanation in the last two issues. It was one of those stories that starts out strong, has some pretty good scenes but then they give it a lousy ending. Too many good movies, shows and series are ruined by this.

Well, there’s an awful lot of Heroes in Crisis threads already on the boards - I apologize for derailing this Huntress vs. Harley one.

I still think that Huntress, because she’s dedicated her life to fighting crime in a more lethal fashion, would be able to plan out and execute a fairly solid victory over Harley, though it would be a hard fought battle. And if it happened in the Harley Quinn titles, Harley would win, given title character shields.

Look at that. You got me to choose. Helena. Any Helena.

I’m going with Harley. Yes both are extreme fighters, both will kill. However, for me anyone who has the slightest bit of empathy, even a killer will lose against someone who has no logical boundaries or moral code. Huntress will kill bad people, Harley will just kill. Huntress partners with Batman who will not break a code, and will not work with someone who will cross the line. Harley was partners with the Joker who has no qualms about killing anyone. Batman family doesn’t kill, Joker family kills. Harley!!!