Who Would Win: Hal Jordan Green Lantern vs Superman

Having a discussion with my nephew and the question always comes up as who would win in a fight. Would Hal Jordan be able to create kryptonite with his GL Ring or would Superman break Hal’s hand and jaw before he is able to? I could have sworn I read an issue where a G.L. Made Kryptonite but I am not sure if I am tripping.lol

I don’t specifically recall GL making kryptonite, but he has beaten Kryptonians before. I think Superman would typically win (he’s Superman), but that Hal could beat him. Superman (sometimes even weakened by kryptonite or a red sun) is inherently very powerful, but Hal just needs his willpower and the ring… which is sometimes made by his own willpower.

The ring creates hard light images, it can’t create matter, so no to creating kryptonite. I think Superman would win, myself.

Lean heavily towards Supes-but in the back of your head you remember seeing Hal as Parallax clock Clark with a single punch.

Hard light constructs take on the properties of what the ring bearers imagine/will them to be. Hal and Kyle, at least, have made constructs mimicking kryptonite radiation before. (Though I’m not sure if they, or the rings, need to know it’s chemical composition like Firestorm.)

I think it probably comes down to who acts first. Though if he isn’t completely caught off guard, Supes may still be able to attack GL and break his concentration before the radiation weakens him too much.

Then again, not to be “that guy,” but why are they fighting in the first place?

Yeah, there is precedent for Green Lanterns being able to create constructs that emit the same radiation as kryptonite. It’s been a while since that has been reaffirmed, though, so you could argue it may not be the case in the current continuity. (On the other hand, I don’t know if there’s any strong reason for it to not be the case, either.)

I’d also point out that in the Injustice comics, Ch’p is able to freeze Superman by inhibiting his brain’s synapses from firing (or something along those lines). He comments that being small lets him more easily focus his power on small things, but I think it’s at least possible that Hal could similarly disable Superman, with enough imagination.

But really, we all know the real Green Lantern, Alan Scott, would mop the floor with both of them

Hal would win. Imagination beats all. I would make an army of Doomsdays.

Maybe a friendly spar to toughen each other or the alternate Millerverse continuity where Bats succeeds in getting Hal to stay and face the government.

Love them both, but I’d have to put my money on Superman.

Hal wins. - They call it “the most powerful weapon in the universe” for a reason, and Hal was/is often called the greatest GL. (not that little upstart Kyle.) While the ring doesn’t change things at a molecular level (i.e., making kryptonite), it can cut off air, manipulate the environment, create a green shield to filter the color of the sun, create a construct that seeps in from around Superman’s eye’s, nose, ears, mouth to play “Taps” on Big Blue’s eardrum, block his lungs, heart, get to his brain… Hal took down the Corps, if he was motivated, Superman becomes another casualty.

Just wanted to toss in with the GL picks ,Hal did create his new ring from pure will only the gardians could do this before (Sinestro also )theres no telling how powerful he is, he Could also hit me the the twofer create a red sun effect mabye even use it as a protective shield An then hit with all the stops ,it be a good battle but I think Hal would get him he’d will it thru

Just throwing it out there that Hal sure did create kryptonite in DC comics presents #26. In this issue an alien called G’nom possesses Hal’s body because he figured out that the lantern ring could create kryptonite*.
(*note that Hal did not know this before the event)

Before this event;
Superman: 75% chance he could win
Hal: 25%
After this event;
Superman: 45% chance (in the comic G’nom surprised Supes because Superman obviously didn’t know that was possible, Supes is faster than a speeding bullet, more powerful than a locomotive and has the knowledge that GL can create Kryptonite so he has a chance)
Hal: 55%
BUT lets not get ahead of ourselves, that was pre-crisis, post-crisis’ Man of Tommorrow #13 Kyle Rayner had Big Barda, Wonder Woman, and Connor Kent hold down Superman long enough for Martian Manhunter to unlock the equasion of Kryptonite in Superman’s head, long story. The GL ring is very similar for each Lantern so basically Hal can do the same thing.
Superman: 80% (Kyle used the whole Justice League to get just one block of Kryptonite! JUST ONE BLOCK!!! If you have read a comic where Lex uses just one small block of Kryptonite you would know that Lex stood a chance, but always lost in the end, and plus the fight is Hal vs Superman not Hal and the entire Justice League vs Superman. In other words, no Martian Manhunter, no Kryptonite
Hal: 20%
But the New 52, and Rebirth, who knows if GL can create Kryptonite
New 52
Superman: 64%
Hal: 36%
Rebirth
Given up in the sky,
Superman: 85%
Hal: 15%

It seems from Green Lantern comics that even Hal believes Superman would kick his butt. But who knows, I am sure there are certain scenarios where Hal’s willpower could possibly overcome Supes’

Superman. He fights until the ring runs out of charge, then he denies the recharge.

While GL wouldn’t go down without a good fight, I think you have to say Superman. 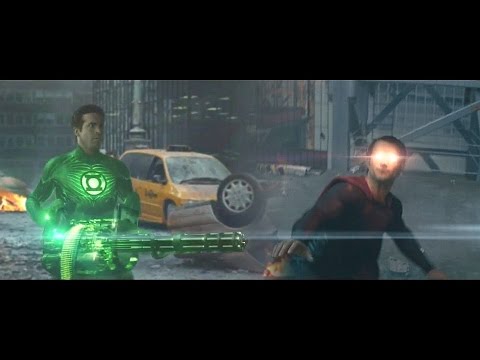 Fun, but I think Hal chose the wrong place to stand here.
next page →