Who Would Win: Fourth of July Edition

This Sunday is Independence Day in the United States. To celebrate, this week’s matchup is between an iconic hero from each side of the American Revolution-Uncle Sam versus Colin Clark!

Uncle Sam is the physical manifestation of the communal spirit of the United States. His powers are sustained by the American people’s belief in Liberty and Democracy, and include super-strength, speed, invulnerability. Colin Clark is the last son of Krypton who was sent to Great Britain, where he was raised to keep a low profile and always ask himself “What would the neighbors think?”. (If you’ve heard of Superman, you’re probably familiar with Colin’s powers).

If these two heroes somehow came to blows, who do you think would emerge triumphant? Let us know who and why, below! 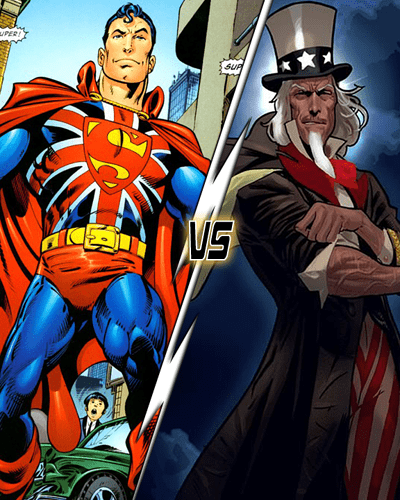 Don’t know much about the either comic wise but based off powers I think Sam gots it.

Uncle Sam all the way!

In case anyone is wondering where Colin Clark is from, he’s from Superman: True Brit. It’s definitely a unique Superman story.

During the rewards program I read a few Uncle Sam comics.

Haven’t read much about Colin though, and seeing that Colin would ask “What would the neighbors think,” I see that Uncle Sam’s spirit can not be contained and you are right that Uncle Sam takes the victory.

I first saw Uncle Sam in Infinite Crisis (which also happened to be one of the first DC comics I tried reading since I was a kid, which was a huge mistake :P). I’ve been wanting to read Freedom Fighters, so I might have to check out your recommendation this weekend!

Very interesting. That’s a story I haven’t tackled yet probably for the same reasons you had as a kid.

I’ve been wanting to read Freedom Fighters, so I might have to check out your recommendation this weekend!

They were fun to read and hope you enjoy them as well.

I was working at a library and we had a ton of graphic novels, so I figured I’d try reading some after not keeping up with them since elementary/middle school, maybe. I read a few of the Marvel crossovers, like Civil War, which at the time were fairly self-contained and you didn’t need to know a ton of background to understand them, so I figured I’d read the big DC event, Infinite Crisis. I was so, so, so confused.

True Brit thinks this will be an easy fight against this backwoods rube, but is surprised in the early rounds by Uncle Sam’s prowess. But he gets his measure of the Yankee Doodle and pummels him to the ground. Uncle Sam won’t give up though. Then the Bourbon Bat shows up while they’re fighting at Yorktown with a kryptonite ring and True Brit flies off. He eventually decides that Uncle Sam and the rest of the colonists aren’t worth the trouble and he needs to spend more time fighting Captain India and Dr. Spice Colonies too keep them in line. Uncle Sam wins, kind of.

And Bourbon Bat spent 75 trillion livre on that ring, so that’s going to be trouble in about eight years.

Well then, he hasn’t stood a chance for the last half-decade at least.

I don’t know if its not their belief in the government but in ideals, he might be ok. if it is belief in the idea and the stubborn dream of people who want a better life(hope and or propaganda are pretty strong still) but if it is a more physical belief then yeah he’s screwed

I recall a Brit friend of mine around the 4tg of July saying about the War for independence, “we want a rematch!”. To which I replied “ya got one in 1812 and we kicked your a$$ again.”

Uncle Sam! I have True Brit but haven’t read it yet. But his True Brit uniform doesn’t look right to me. I love our British friends but there’s not a cooler image than the one I use on here. SUPERMAN standing in front of the Red, White and Blue!

We often forget that The Battle of Lake Champlain could be the most important victory in American history.

Given that in True Brit, Colin is a tabloid journalist, I could see him writing some lurid article making up a scandal to undermine the American people’s confidence in Uncle Sam. It seems like that would be more of his method than just a straight up fight.

Well Uncle Sam’s power is based on the belief of Americans, so when we are at our patriotic best, he should win, but as the country isn’t really unified and the growing cancel culture and the polarization of the left and right, prohibits unity, at this time I’d have to give it to the Brit.

He is powered by our belief in the idea of The US’s values. Two opposing groups that fight yet believe in them should still empower him.

I forgot Federalist vs. Anti-federalist. Probably the most important one.