Who Would Win? Fire vs. Killer Frost

If you’re like me and aren’t really a fan of heat, you’re eagerly awaiting cooler weather. Our fight this week is between two characters who embody the conflict between heat and cold-Fire vs. Killer Frost! Let us know which one of these powerful women and occasional Justice League members would win, below! 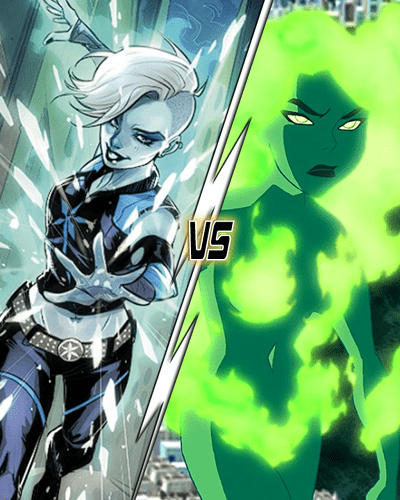 I think this would be a close one, but I voted for Frost because I have always been a fan of the character.

I think in scientific way, Killer Frost could win by putting out the fire with ice and snow.

This also reminds me of Pokémon game, try knowing what beats what in a easy way.

Hmm fire melts ice so Fire it is.

That was my logic as well

Hmm…Probably Killer Frost honestly? I mean, Fires got a ton of power. Like its been shown she was able to create an artificial sun to keep the Jungles of Brazil warm when the real sun went out. Shes got alot of power to her.

That said, Killer Frosts powers are not simply the ability to create and project cold, thats just a side affect of her primary ability which is draining the heat from existing sources. (Which she needs to do to live)
Killer Frost is a character who despite the theming would have a much tougher time against the likes of Mister Freeze and Captain Cold than Fire.

Love this poll! I’d probably go with Killer Frost but that’s probably because I’m just more familiar with her.

This is a no brainer, Frost lives off heat and it doesn’t bother her actually it makes her more powerful, so Fire is out of luck in this one.

Fire from Justice League Unlimited the Animated TV Series! Hopefully The Shade is in the future next VS Poll VS Doctor Light Kimiyo Hoshi!

See, here’s the thing with this one: the way Killer Frost’s powers work are that she doesn’t simply generate ice; she’s a “heat vampire.” She absorbs the heat around her and generates that into her abilities. The truth is that a fight against Fire would be like a grand buffet for her. Killer Frost wins this easily.

Physics, schmysics. I like Fire (especially the DCAU version, but also the '80s and pre-Morrison takes, too), so she wins.

As Batman said when he impersonated Jim Morrison in 1991,

“Come on baby, light my fire.”

Caitlin wins this one; her powers work by absorbing heat, and fire is shown to make her stronger. There’s a reason she can hold her own against Firestorm and defeat a minor fire-user named “The Hotness” in seconds, after all!

Went with Killer Frost. I understand how their powers work

That is true. I didn’t even consider this

I don’t know much about the other character lol