Who Would Win: Element Lad vs. Metamorpho

This week’s fight is between two masters of matter-Element Lad and Metamorpho!

Jan Arrah, known as Element Lad, has the ability to transmute elements that are near him, and was also a leader of the Legion of Superheroes. After he was exposed to radiation from a meteor, adventurer Rex Mason gained the ability to transform his body (or specific parts of it) into any element that the human body contains.

One hero can control matter around him, and the other can control the matter inside his body. Who do you think would win in a fight between these two? Let us know, and share your reasoning, below! 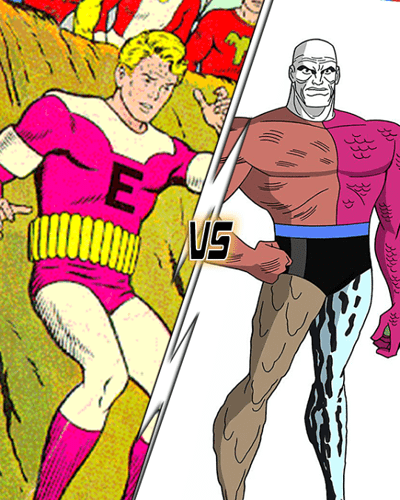 I picked Element Lad, as I am assuming the fact that he’s from the future and a space faring civilization, that he would possible know more elements than Metamorpho, which could lead to him potentially transforming Meatmorpho into something which negates his powers. That is assuming he can stay away from Metamorpho’s dangerous forms gas or radioactive long enough to do it.

) but you convinced me to switch

Wow, I’m impressed, that I could do that. Long Live the Legion.

Element Lad could change some of the air around Metamorpho into an impenetrable metal to contain him.

RexRebel makes a great argument for Element Lad. 1,000 years of advances in chemistry is quite the advantage!

I don’t care if Element Lad has any kind of advantage. He isn’t Metamorpho, aka one of the biggest badasses in DC history that many are unfortunately unfamiliar with.

Plus, was Element Lad in this series? No, but Metamorpho was, and the series was all the better for him being in it.

Metamorpho is the better character, but Jan has more elements to work with, greater range and more chemistry knowledge.

@Vroom: The Terrifics was–forgive me–a terrific series, but I still think a guy with a flight ring and total mastery of the elements around him wins this battle. Now if either of them ran into Owen Reece…

I at first thought Metamorpho would be the clear winner here, but since Element Lad can affect matter around him, that would make things a little unpredictable. Like, if Metamorpho turned to baking soda, Element Lad could change the air to vinegar. (That is the best example of a bad combination of substances I could think of. Chemistry was absolutely not my strong subject in school.)

Jan has command of every element, and Metamorpho (at least to the best of my knowledge) only has command of the elements found in the human body. As well, being from the future, and from another planet, Jan has command of elements not found on Earth. If he wanted to, Jan could turn Rex into inertron and that would be it.

I like both of these characters and have read most of their appearances. But I have to go with Jan. As pointed out, Jan has access to other elements than Rex knows. As an example, he could make a sphere of inertron around Rex and that should end it. Also, based on how he handled the Daxamites in the Great Darkness Saga (changed just enough air into lead) he could maybe change a small percentage of Rex into an inert gas which might interfere with his transutations. Like @awk1964.87979 , I thought Rex could only use elements in the human body.

I definitely like both of these characters. I think Metamorpho doesn’t get enough screen time (I was really hoping, after Simon Stagg showed up in WW84 that Rex Mason’s name would come up somewhere), and one of my first loves was the Legion. I was just following my own logic of what I knew of these characters to fit the contest. Unfortunately, Rex lost.

Oh, and this contest made sense to me, being that they have somewhat similar abilities.