Who would win deathstroke or Batman

Given enough prep time Batman. Either way it’d be a hell of a fight

There’s nobody in this reality or any reality that Batman can’t take down.

Most likely Batman, but yes it would be a very good fight

It has happened before 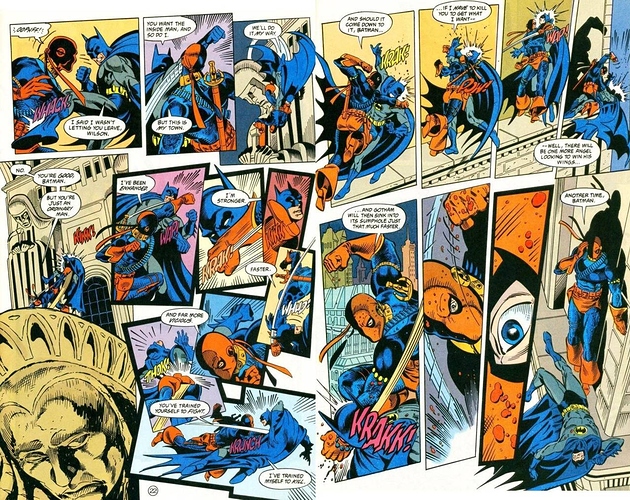 I believe he’s one of the few that can take the Bat, just don’t give Bruce anytime to think and prepare.

Batman without a doubt. Batman has mastered over 125 martial arts and is a master tactician. He’s fought and beat Deathstroke already. The only argument one needs to prove Batmans victory is the fact that Deathstroke first appeared as a teen Titans villain and Dick Grayson beat him. If Robin can beat him, Batman can without a doubt beat him. Don’t get me wrong tho, I’ve got mad love for Deathstroke or, originally dubbed, Deathstroke the Terminator. His super strength and healing factor are impressive and his hand to hand skills rank in the top 10 that DC has to offer. His most impressive ability is his mind tho. He has the ability to think 9x faster than the average man, but Batman is far from an average man himself.

E-Dot has the answer I agree with.

Depending on where their at. Deathstroke did receive almost full use of the human brain. I’d probably pick Bats cuz he always finds a weakness tho.

That depends. Is this Identity Crisis Deathstroke who can casually own the entire Justice League because he’s just that good, or original Deathstroke, who wouldn’t engage any opponent in a fair fight if he could avoid it? Is this Grant Morrison Batman who is always prepared and always has some oddly specific gadget or absurdly overcomplicated plan to deal with every possible situation, or is this normal Batman, who actually makes mistakes and has to adapt to unexpected threats?

Using the interpretations of the characters I like best (Deathstroke is superhuman but not THAT superhuman, and relies more on his brain; Batman is smart and adaptable but decidedly NOT superhuman), I’d say that it still depends. Batman’s the superior strategist, so Deathstroke would want to force a direct (and rigged) physical confrontation before Bats had a time to plan, but Bruce might still be able to outmaneuver Slade if he knew 'Strokey was coming.

My problem with the image that was posted before is not that Batman wouldn’t lose (he would), but that he wouldn’t be stupid enough to just start swinging at Deathstroke, even knowing what the guy’s capable of. Not sure what the context is, but it seems contrived.

I’m pretty much exactly where you’re at. Depends on which version would fight, @ what point in a storyline. You put it better than me tho, congrats.

Give Batman an could defeat deathstroke, superman, godzilla, darkseid and thanos all at the same time :\ In all seriousness, deathstroke is batmans equal in all areas so it’s a toss up.

That’s a tough one but it’s bats

I remember when they fought in a series years ago (pre 52), Terminator (aka Deathstroke) owned Batman.

Deathstroke, It was confirmed in the “who is damians father” story line.

In earlier comics, Deathstroke had gotten the best of Batman.

I think now they fight to an almost stalemate, but I give the edge to Batman.