Who Would Win? Catwoman vs. Riddler

The Batman is almost here! We’re going to celebrate its release with a fight between two of the stars of the movie: Catwoman vs. Riddler! Selina Kyle versus Edward Nigma- if these two Gotham City criminals were to square off, who do you think would emerge triumphant? Tell us who you think it would be and why, below! 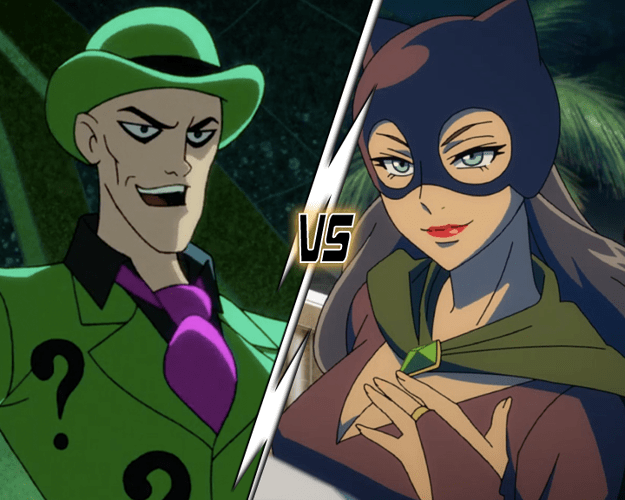 Sorry Ed, at most I’d say that Selina might be slower at figuring out your riddles than Batman, but she’d still solve them and then he’d get a whip-crack at his unmentionables.

I went with Selina. She could solve the riddles (although admittedly it might take longer than it does with Batman) and once she did, she would beat The Riddler in combat.

Riddle me this @Green.Lantern, what genius that can outsmart a cat???

I definitely am excited for it!

I honestly can’t remember the last movie I saw in the theater. I do think the Riddler would be hard for most people other than Batman to outsmart, unless you surprised him somehow.

Catwoman.
She knows how get in peoples head and toy with. And someone with Riddler’s ego. She definitely gets the win.

The Catwoman DLC from Arkham Knight was satisfying

Catwoman, because she’s Catwoman, one of the most badass characters in the DC pantheon.

Sure, Riddler’s cool, but he’s not Catwoman Cool™.

My answer is always “Who has their name in the title?” And since Catwoman has more ongoing solo stories and/or movies (even with the quality of one of those movies, lol), I think she wins!

And since Catwoman has more ongoing solo stories and/or movies (even with the quality of one of those movies, lol)

Poor Catwoman, and having her name attached to the Worst Live-Action DC Movie of All-Time.

However! Catwoman: Hunted was pretty darn good and a lot of fun (the bath scene? Mmmhmm.

), so at long last, we Catwoman fans finally have a Catwoman movie that doesn’t suck, to which I say “Wunderbar!”

SN: Speaking of Catwoman: Hunted, that scene when the assorted members of Leviathan call on their powers, demons and what have you?

Catwoman: Hunted was really good! I especially liked Selina’s reaction to Kate calling her “Cat” - “Only he calls me that” - felt like a very nice nod to Tom King’s run!

I personally thought the finale was the most intense part of the film for me! Some pretty great moves!

I personally thought the finale was the most intense part of the film for me! Some pretty great moves!

The Catwoman vs. Cheetah fight was indeed pretty schway.

Do you think Cheetah survived the impalement?

I dunno, honestly! I guess it all depends on if they get a sequel!

Tally in another vote for Catwoman!

Catwoman would put a beating on riddler lol…

Eddie- just sit down before you embarrass yourself.