Who Would Win? Bruce Wayne vs. Dick Grayson

Welcome to our speculative stadium, where legends duke it out in loony locales with only a few atypical articles to defend themselves!

It’s up to YOU to determine how it all goes down - the hows and whys of Who Would Win?

This week’s challengers are…

Where will they throw these fantastic fisticuffs?

Pick your winner via poll below and elaborate on the play-by-play of your match-up in the comments! We want the details!

“Don’t be Batman”, Dick was (mostly) always told.
Bruce has more mental anguish than Dick. These are Batarangs, not Robinarangs. Dick would probably be more likely to eat popcorn than Bruce, causing him to have more fiber and be less athletic (fiber probably does something else, but I’ll go with that).

With the location being an abandoned theater, Bruce will be more sentimental and detached. While this initially may be a disadvantage for him, he could also view the setting as a place of anguish for taking away his childhood, fueling his ability to fight.

My bets are on Grayson. Why? Simple. You see, the challenge vaguely states that Bruce & Dick duke it out within an empty theater. Since it never states which empty theater, I get to choose, which means that they are to do battle within Monarch Theater, the second to last place Bruce saw his parents alive. With Dick being able to dish some extra mental anguish on Bruce, he gets the edge.
-M

Batman uses Bat-arangs. So, if Robin was going to follow suit, he should have Robinarangs. What’s the que?

I feel with these specific settings. Dick would take it. He is actually a master of more martial arts than Bruce. Actually I dont know about new 52 or Rebirth Dick. But Modern era was.

I think fighting there makes him angrier and tougher. It is similar to how in The Dark Knight Returns fighting at Crime Alley gave Bats the willpower of Green Lantern. Bats is most vulnerable at dumps and spaceships than place with personal connections.

I really wasn’t buying the actor picked for Bruce until I saw how moved and fought in this scene. Even though he was in a dress shirt and pants, I could see him as Batman based on his stance alone. I would give it to Bruce.

Can’t argue with this

Bruce has contingencies for everyone. He trained Dick which means he knows his weaknesses. Dick would start off on some moral “you can do the right thing” and Bruce would press the button activating the bomb he implanted in Dick’s head three years ago (or, since it doesn’t say they have bombs, a good sold stab in the heart with a batarang). Deep down Dick is a good person but deep down Bruce is not. It the same as Batman vs Superman but without superpowers or kryptonite. 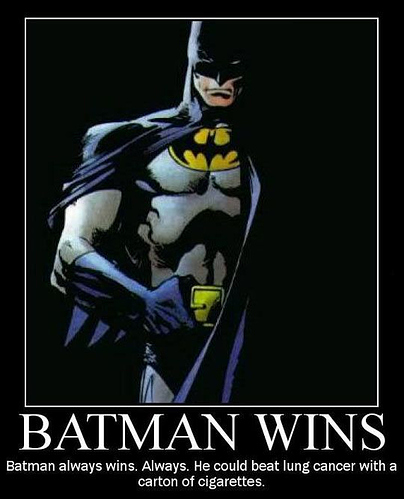 @BestBeastBoy, remember what Bruce said to Dick in Batman Forever? He said,“I can stop you.” And Dick knew he could so he gave up arguing with him. I think Bruce has alot more training then Dick did.

Is this even a question? Bruce would pick him apart easily. He knows him down to the bone.

I’d like to say Dick, but c’mon. His sentiment would stop him, while Bruce’s is…well he’s Batman.

Dick as Robin doesn’t possess the experience. Dick as Nightwing though… DC would have Bruce win just cuz he’s Batman even though Nightwing is better than him. Read this for proof: Gotham Anatomy: The 5 Weirdest Things About Nightwing's Body

Bruce wins every time. He has more training and experience, and Dick’s training (most of it) came from Bruce.

Depends on which Batman. Is it Iain Glen @60 vs Brenton Thwaites @30. Is it hand to hand? I go with Batman, but it’s super conditional.