Who Would Win? Black Adam vs. Eradicator

Our matchup this week is between two of the greatest enemies of the Big Red Cheese and the Big Blue Boy Scout-Black Adam versus the Eradicator! Who would come out on top-the ruler of Kahndaq or the twisted Kryptonian machine? Let us know who you think it would be and why, below! 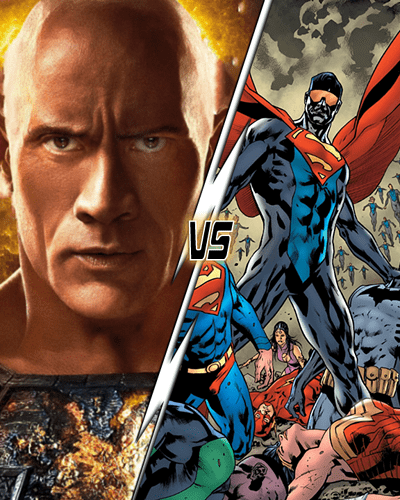 An interesting rumble, especially since both can more than hold their own against Superman, the Justice League and other powerhouses.

However, I’m going to go with…Eradicator.

After all, Black Adam doesn’t have a hilarious Kids in the Hall sketch wherein Bruce McCullough runs around saying “I am…the E-rad-i-ca-tor!”, now does he? No, no he does not.

Black Adam can give rock bottom and people’s elbow on Eradicator and still win!

You can tell I’m a fan of The Rock!

Adam would win but a tough battle.

Very tough I had to go Eradicator b/c he’s basically a Kryptonian based A.I. He always comes back. Even if Black Adam completely dissembled him, he could just imbibe, if I may slightly misuse that word? Into anything. The circuits, well, basically everything. He’s made of the same thing the environment is, as are we all. However, he has the ability to manipulate it to his advantage. So… I guess that’s my reasoning?..

I literally think of that skit, every single time I read his name. I can even tell u the exact scene it is. Running into the gym with mask on, Racquetball in hand, screaming Eradicator!!!

I had a hard time at first thinking of someone who would be a good match for Black Adam, since he’s so powerful. I’m glad everyone seems to think this would be a close fight.

Yes. Took me some time to play it out in my head. I love going back mentally thru everything I’ve picked up over the years. It’s refreshing to write an entire post without using Google at all lol.

Initially, I was going to go with Black Adam but remembered that the Eradicator is a being of pure energy and can manipulate the same, which could include magical energies, I assume; additionally although it hasn’t been used as much recently he is also a telepath, and as such brings a different power level to the fight. He could just make Black Adam say his name, although if kryptonite is anywhere near them, I give it to Black Adam every time. For the purpose of this vote I am going to assume no Special K is nearby.

Well when I’m not reading comics, watching tv (sports) or listening to records im sitting contemplating who would win in superhero battles or in this case super villains. In this case i would go with Black Adam because the only reason they would be in a battle is The Eradicator is attacking Kahndaq! So goodbye Eradicator. Oh, and because he looks like ‘The Rock’!!! Lol 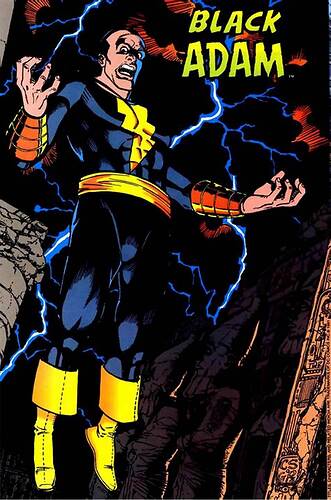 Recently read a comic where Majestic beat the Eradicator, so if he could do it I think Black Adam could also.

Black Adam as eradicator is not as powerful as Superman, especially in his original incarnation. Well, Black Atom is able to stand toe to toe with the man of steel and has knocked him out at least once using a special word.

I literally think of that skit, every single time I read his name. I can even tell u the exact scene it is. Running into the gym with mask on, Racquetball in hand, screaming Eradicator!!!

Mutual fans of DC and The Kids in the Hall unite!

I can think of a few WildStorm folks he could tangle with.

I can think of a few WildStorm folks he could tangle with.

Majestic
Winter
Fuji
Fairchild
Nemesis
Apollo
I could probably think up a few villains who could give as good as take.

An Apollo vs. Black Adam rumble would be sweet. I’d like to see him square-off against Exotica and Tobruk as well.

I could probably think up a few villains who could give as good as take.

Helspont’s the first that comes to my mind. He took on Superman during The New 52, so why not Black Adam as well?

Oohhh… Voodoo, Caitlin, Grunge, Sarah Rainmaker. Zealot & I can’t think of the cyber/ human female who was rebuilt cyborg style minus the motherbox. But, love her. Then males. Apollo & Midnighter, put Grunge in with the females already but I’d go Grifter, Deathblow, Mr. Majestic, even Hawksmoor. Oh, Cybernary? Just came back to me. I’m not Googling to check but I think that’s it. If not I’m confusing her, b/c that’s a definite Wildcat character name, & I only remember one main good & one semi-main evil cyber ladys.

Thoughts on Void vs. BA?