Who Would Win? Batman '89 vs. The Dark Knight

This week’s matchup is a fight between two skilled detectives crime fighters-Batman and Batman!

When Bruce Wayne’s parents were murdered in an alley, this set him on a path that would lead him take up the image of the bat and wage war against crime.

His opponent, Bruce Wayne, became a caped crusader against evil and villainy after suffering a horrible tragedy as a child.

In this epic battle of the Batmen, which one do you think would emerge triumphant-Batman or Batman! Let us know who you think it would be and why, below! 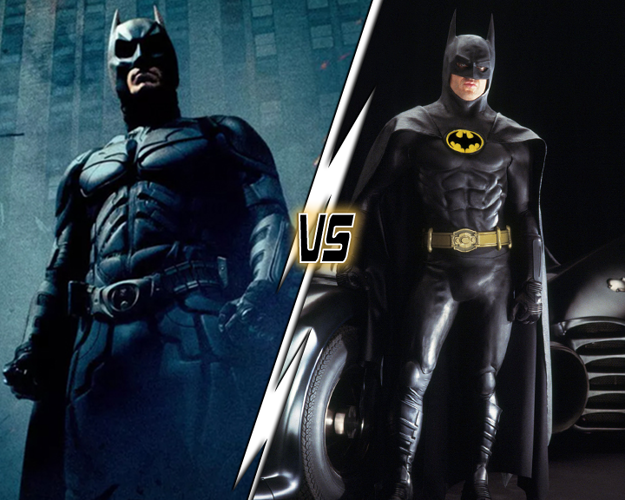 You’re mean @Green.Lantern! It’s like asking which of your children is your favorite kids!

I voted for Michael Keaton Batman, since I grew up with 2 of his batfilms that help made a way for Batman The Animated Series.

That’s pretty much how I feel any time a fight is between two heroes.

I’d say DKT bats because of his tech. But overall a close battle.

Nostalgia would dictate my response to be Keaton, especially since Batman (and its corresponding toylines from Toy Biz and Kenner) is one of the things that got me into DC.

However, facts win the day and Bale’s Batman is just so much more of an effective fighter. He’s got a bigger build than Keaton (as Bruce and Batman), a seemingly more masterful mastery of the dark and he would likely beat Keaton to a pulp.

There can only be one.

Keaton would kill in this competition.

No, that wasn’t a figure of speech.

Keaton would kill in this competition.

No, that wasn’t a figure of speech.

Bale would string him to a train, say some jazz about “I won’t kill you, but I don’t have to save you!” then go wheeee! as he exits the vehicle and into the evening Gotham sky.

Batman vs. Batman… the winner is Batman.

'89 Batman is my favorite. I actually fell asleep when I watched The Dark Knight Rises so… yeah… I’m rooting for Keaton, no matter what my mom says. Keaton Batman was also my first Batman, and always will be.

There can only be one.

Keaton all the way for me.

Keaton all the way for me.

So thankful for @DC89 & @AlexanderKnox and anybody’s vote for 1989 Batman, us 89 batfan gotta stick together!

This guy owns both of them. You just reminded me that the first film’s soundtrack is technically a Prince album because of the music he did for the film… I own this CD, how did I forget that? Another reason why I voted for '89 Batman!

Bale Batman would be the winner if they were fighting “mano y mano”. But I’d totally root for Keaton Batman 100%. But we have to take into account what each of these Batmen have in their arsenal and quite frankly, being that Keaton is from 1989 and Bale is in our time, (unless Keaton’s Batman has access to the same tech and what not as Bale’s Batman), Bale has way more “Cool Toys” than what even Jack Nicholson’s Joker realizes Keaton’s Batman has in the film itself.

All of this being said, Bale Batman is the winner here.

This was a difficult choice, but I went with the Bale Batman over the Keaton Batman based on which movie I prefer. I love both Batman '89 and “The Dark Knight Trilogy,” but The Dark Knight is my all time favorite Batman movie! Now another interesting question is if Adam West could take Keaton or Bale…

West would clobber them both. They are no match for his dancing and surfing skills.