Who Would Win: Atrocitus vs. Parasite

This week’s fight is between two brightly colored and highly dangerous villains, one driven by pure rage and the other by pure hunger:

After his home sector was wiped out thanks to the Guardians of the Universe, Atrocitus became consumed by rage. He derives his powers from both shamanistic magic and the immensely powerful Red Lantern ring.

Rudy Jones was a Metropolis janitor until an accident transformed him into the monstrous Parasite. Filled with a constant hunger for energy, he’s able to drain and use the life force, superpowers, and knowledge of whoever he touches.

If Atrocitus and Parasite were to fight, who do you think would win? Let us know who and why, below! 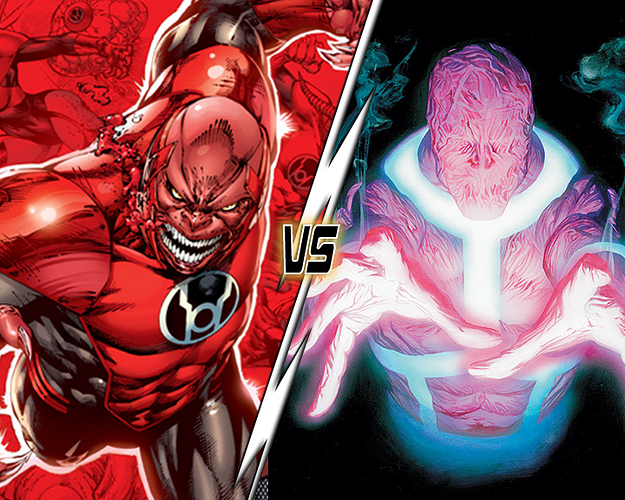 As long as atrocitus keeps his distance and uses long range attacks, I think he takes it.

First off, really good match. This is one I’d definitely like to see.

As Boyfriend Wonder said, this is the classic method of dispatching Parasite, and with a mainline to the Red Lantern Central Power Battery I think Atrocitus is more than capable of overloading Parasite. With Atrocitus having to contend with Low of the Sinestro Corps, a character who is himself a parasite with a power ring, I feel like the leader of the Red Lantern Corps is mentally and strategically equipped for this battle.

Parasite seems more powerful to me personally. But make an excellent point @HubCityQuestion. If there is a definite strategy to take him out, no way would he win.

also parasite needs to get close to atrocitus, which atrocitus can prevent from afar

Depending on geographic setting of the match, Atrocitus could throw boulders or crush Parasite by dropping half a skyscraper on him.

Parasite can draw too much power and blow the proverbial fuse. So Atrocitus can use that method as well. (Thanks @HubCityQuestion )

If Parasite can get behind him and jump on his back, he stands a chance. But, that’s a BIG “if”.

Given the variations of available attacks, gotta give the advantage to Atrocitus.

Superman nerd I am, I’m pulling for Atrocitus.

Why? Atrocitus would get hold of Parasite (be it by ring construct(s) and/or his own hands) before he could absorb too much of his bodily energy, then crush Parasite’s skull against his knee and snap his neck.

Afterward, Atrocitus, holding Parasite’s dead (and eventually severed) head in his hand, would mutter “The Parasite has been removed from my sight.”

Atrocitus definitely wins. A good fight yes but as mentioned here a simple overload could stop him or Atrocitus range as well. And I feel he is more skilled at combat as well.

I’m glad to see the reaction to this! I thought for sure everyone would say Atrocitus had no chance, but I’m happy to see I was wrong. I also feel like Atrocitus would be able to use his magic to give him an edge, if necessary.
Considering he was able to make Black Hand’s energy-draining weapon from junk he found on Earth, it also wouldn’t surprise me if he could come up with some way to block or counteract Parasite’s powers.
Has Parasite ever fought a Lantern before? I’m curious if he could just absorb Lantern energy or not. Even if he could, I feel like the red energy would hurt him in the process.

Has Parasite ever fought a Lantern before?

Looks like in the Injustice comics this has happened G.L.

Perhaps also @HubCityQuestion might also know of other instances?

Ah, did some extra digging and here is another one G.L.

Thanks for that research! I knew it had to have happened at some point.

Definitely an interesting occurrence in our multiverse of comics.

Probably the rage of Atrocitus would be too much for Parasite, or maybe all that rage might convert Parasite into a new Red Lantern for Atrocitus…

I think Atrocitus is more than capable of overloading Parasite.

I agree too. Atrocitus is a lantern with access to unlimited amounts of energy. Further (from a Smallville episode), I think that parasite attaching himself to Atrocitus would be like trying to attach a light bulb to a nuclear reactor. IMHO

That’s an interesting point, too. Parasite often picks up the feelings and emotions of those whose power he drains. I don’t think he would cope that well with Atrocitus’s rage inside him.

He would feel exactly the same, as he is already full of rage.