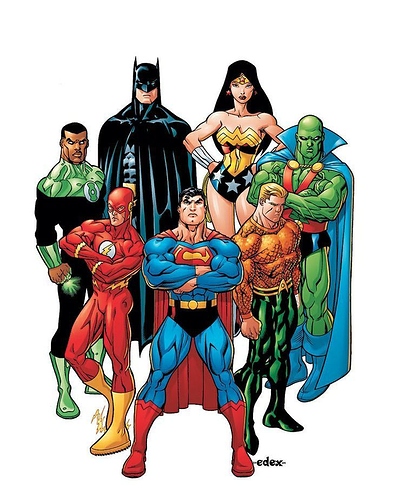 If you were tasked with creating a new JLA, but we’re told you couldn’t use Superman, Batman, Wonder Woman, Green Lantern, Flash, Aquaman, or Martian Manhunter…who would you pick?

Well, Hawkgirl’s already done an awesome job replacing aquaman before, and there’s no doubt she could do it again. (Seriously, we need a second female to regularly be part of the league. )

Black Cannery and Green Arrow are a given.

Can there ever be enough Zatanna?

Green Arrow - A JLA mainstay, deserves a spot on the team again.
Black Canary - In my opinion, the only female character who could replace Wonder Woman. Heck, she could even lead this version of the team.
Nightwing - The only Robin to serve on the JLA, let alone lead it like he did in the 2000s. Dick has the experience to earn a place on the League.
Black Lightning - Has served on the team before, is a natural leader and a team player.
Zatanna - It’s always good to have a hero whose powers are magic-based. Plus, everyone loves Zatanna.
Captain Atom - A powerful hero with a strong moral compass. He could also serve as a liaison to the government for the League.
Steel - I was initially going to pick Mr. Terrific for this spot, but he’s got a team of his own. Steel has a similar skillset and is a somewhat well-known character with ties to Superman.