Who the Heck Is Peacemaker? 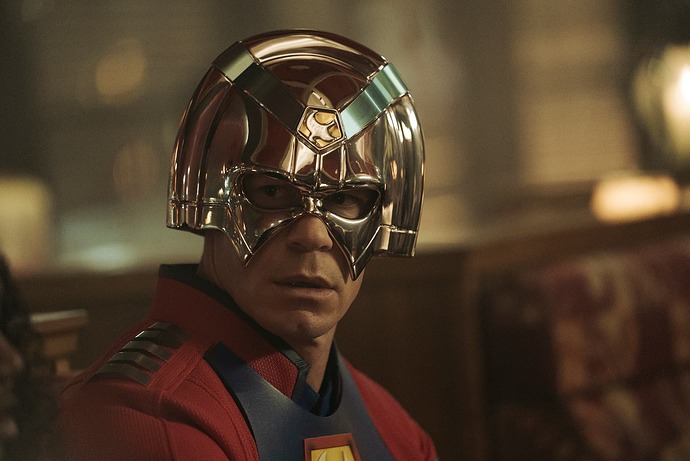 Some people champion peace by promoting unity, understanding and common respect. Others do it through diplomacy and conflict resolution. And then there’s Peacemaker…

What happens when you combine a strong sense of pacifism with a heavy armory? You wind up with Peacemaker, the gun-toting “hero” who loves peace so much that he’s willing to kill for it. This might sound like an unusual description for a so-called good guy, but Peacemaker isn’t your typical crimefighter, as you’re about to discover. The world’s biggest pacifist (his words, not mine) made his big screen debut this summer in James Gunn’s The Suicide Squad and will be returning next week in HBO Max’s much-anticipated spinoff, Peacemaker, where he’ll once again be brought to life by the iconic John Cena. It’s guaranteed to be crass and violent—you know, the way most pacifist-based shows are.

If your only exposure to Peacemaker has been through The Suicide Squad , then you might be curious about who he is and what kind of hero proudly talks about eating… cough …“a beachful of dicks.” Well, if that’s you, then read on. It’s time to meet the ‘Maker.

To learn more about Peacemaker, head on over to DC Comics!

Are you looking forward to the new show on January 13th? Let us know in the comments!

Can’t wait, this should be fun. I am imagining Peacemaker as a constant straight man for the hijinks around him.

Definitely looking forward to it. Exited for what it has in store.

Hey, DC Community, how about setting up a watchalong for next Thursday?

I thought it was so ridiculous that I said, “Yeah, I guess I’ll watch it. I’m in that kind of mood.”

And I guess I’ll finally get around to watching The Suicide Squad.

Peacemaker was a Charlton Action Hero. He debuted as a back-up feature in a comic called Fightin’ Five… but soon, got his own number 1 issue and the five were his back-up feature. When the Charlton folks dropped the Action Heroes as being too expensive to produce-- they languished for years— until their original editior, Dick Giordano, bought the rights for DC Comics. A lot of work went into new books for this characters, but somehow, they missed the point of the Peacemaker, and turned him into an annoying pychoctic. This total misstep continued in comics for decades, right up until his film debut in the Suicide Squad, where James Gunn and John Cena breathed a little life into this Peacemaker gone wrong. It will be interesting to see.

It seems to me that the Peacemaker’s shift to psychotic must have been just ripping off tthe Comedian (“we can’t use the Watchmen characters, but we can give the Charlton characters the same personalities they would have had in the Watchmen”)
.
Peacemaker is barely in his initial DC series, Crisis on Infinite Earths. Hardly anything is said about him or by him in Crisis. He at least avoids the Crisis’ cliche of lesser-known characters stating their own names in their exclamations, which is a sure-fire way to make unconvincing dialogue even more unconvincing.

And then Watchmen debuts in 1986, just a few months ahead of the new pyscho version of Peacemaker that appears in Vigilante #36. So the Vigilante characterization isn’t a result of DC gauging readers’ reactions to Watchmen, since Vigitlante 36/Watchmen #1 come out within a couple months of each other.

If they arrived at the decision to villainize Peacemaker independent of Watchmen, it has to represent the most abrupt turn for a character that another company paid to get the rights to.

I should add that, though we learn nothing about him, Peacemaker is hanging out with the other Charlton good guys in Crisis on I.E. So appears the decisiion for him to turn heel seems to have happened after Crisis.

Maybe they needed to cast a wrestler to play him, so that going from hero to heel wouldn’t prove too overwhelming