Who’s your favorite Live action Batman and why

Before change it up to other non Batman Related things. I want to know who’s your favorite movie Batman

Keaton is the best. He is genuinely intimidating, not merely trying to be intimidating. Second place goes to Affleck, whose main problem is his unenthusiastic performance in the Justice League reshoots. West gets love for his deadpan delivery in the suit, but his real talent shines through as Bruce Wayne.

For me, hands down - Christian Bale. His voice at times might be a bit over the top and have a slight lisp…

but he is my Batman. The Dark Knight has a seriousness, sadness, and intense drive that Bale was able to achieve not only on screen, but also through his actions - going from the less than 120 pound actor in The Machinist back to his normal weight plus 30 pounds of muscle to portray the masked vigilante. It’s a sacrifice and commitment that Wayne himself would make for Gotham! He personifies both Batman and Bruce Wayne, which most have not been able to achieve. Bonus fact that Christian Bale gave all press tour interviews for the trilogy in an American accent (even though he is Welsh) “since the character was such an iconic American creation”. He is as close as I’ve ever seen someone come to being the Batman and I am a big fan of his work on the films.

His voice at times might have a slight lisp…

…which is why he’s the perfect follow-up to Val Kilmer.

I’m going with Bale. He captured the spirit of the character I’m used to seeing on the comic page more than the others. Affleck could have gotten there, but he didn’t have enough to work with.

I also think he has the best”I’m Batman!”

My true favorite was Kevin Conroy (who is in more Batman movies than anyone listed for the record) especially from Batman: Mask of the Phantasm. He was also in Subzero and Mystery of the Batwoman.

Micheal was a good balance of Bruce and Bats

Bale was a good batman and bruce. He only comes in second because he lacked that some of the noir Keaton had.

I cannot decide what I think about Affleck yet.

Sorry but in my books the other two were not good. I think Whoopie Goldberg or Don Knotts would make just as good a Batman as them if they put any effort in.

For the record this is just the Live action stuff

Even though his time on the big screen was short Ben Affleck is my absolute favorite Batman. I think he did a great job portraying both roles and recreating how Batman would of acted through the comics. I really wish we got a standalone Ben Affleck movie before BvS.

I’ve enjoyed every actor as they all brought something a little different for the character.

For me, it’s a four-way tie between Affleck, Bale, Keaton, and West. Clooney and Kilmer feel like very forgettable Batmen, whereas the others really seemed to leave a lasting impression on the Batman legacy. Adam West’s Batman, with all his campy dialogue and gadgets, was perfect for the 60’s just as Keaton’s Batman was perfect for the late 80’s/early 90’s. On a thematic level, Bale’s Batman was great for Christopher Nolan’s more realistic interpretation of the Dark Knight. So really those movie Batmen are my favorites as they perfectly encapsulate Batman in those contexts.

All that said though, it’s Affleck’s Batman that comes closest to what I imagine Batman to be in general. The warehouse scene, coupled with the training montage from BvS is just about everything I’ve wanted to see Batman do in a live action movie. The way he moves, the way he uses his gadgets and his knowledge, it’s exactly the sort of stuff that I think of when I think of Batman. It’s honestly a shame that he will only be remembered in the public eye for the whole “Martha” fiasco.

West fit the tone and style of the movie (and show) he was in the best. Keaton was miscast, but did well enough anyway that he’s still probably my second choice.

Keaton for a live action Batman. I think he actually did Bruce vs Bats quite well. We don’t see a lot of it because of how the script was written.

However, for live action my real vote goes to “Anyone but Affleck.” The biggest miscasting of Batman ever. I really think they were lousy performances, regardless of the director that was used.

As for animation, Rino Romano gets my vote. Yes, KC is more prolific and more ingrained into the formative years of many fans, but he comes second on my list. And third is Adam West.

I could not agree more, @DeSade-acolyte!

Michael Keaton is my favorite. Yeah, Batman (1989) and Batman Returns are what I grew up on, but I always found his portrayal to be the most balanced as far as Bruce/Bats goes (many of you have said it and I agree). Also, his being so socially awkward just seemed to fit.
I liked the Dark Knight until I didn’t. Once I started reading the comics I retroactively started to dislike it and Bale’s portrayal.
In everything I have read (which, granted, is not a lot because I’m still pretty new) Batman never turns off the detective, so him attending functions out of sheer obligation and being really awkward because it is merely for appearances just seemed more real. Watching Gotham now only backs my opinions and the picture I have in my head.
@AlexanderKnox I would love to comment on the Affleck stuff, but I cannot because I have only seen JL. However, I don’t like Affleck as an actor. I think he’s okay at best and will only watch Dogma voluntarily, otherwise avoid, avoid, avoid. I did find the trailers intriguing though as I was impressed by his Bruce side. OH, ha! I suppose I have access to those movie now. LoL

Keaton is the best, without him, we wouldn’t have Kevin Conroy as batman 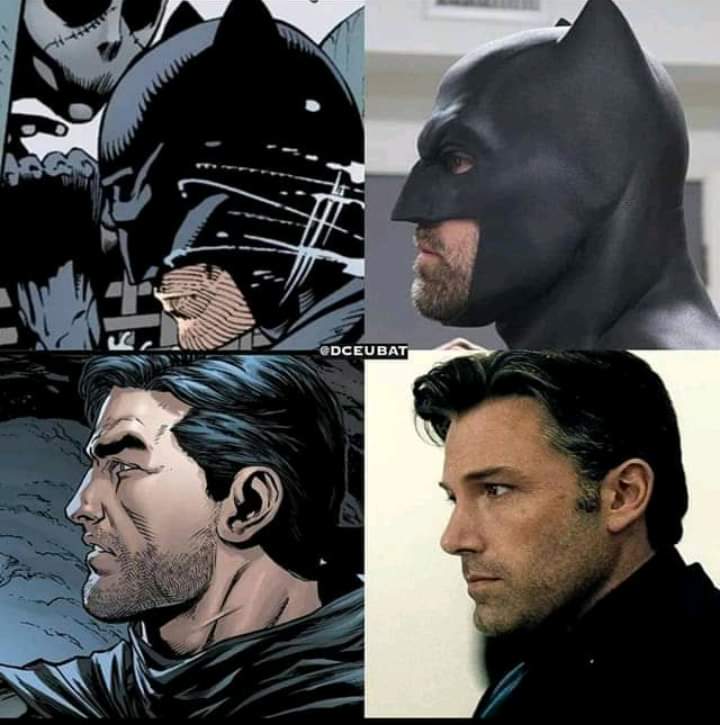 So, I voted Christian Bale as my favorite, but I think it’s really a toss up between him and Ben Affleck. Each captures aspects of the Batman that I really like.

Christian Bale: First off, I like that he had a a beginning and end to his story. I do wish that more movie time was spent in his prime years fighting crime, but I don’t think Nolan was doing more than 3 films. His use of technology and equipment was really creative and grounded. His playboy Bruce Wayne persona was really well done in my opinion. His Batman also felt incredibly intelligent, like he was always the smartest man in the room. I think Batman is best when a tragic figure, but I liked that he had a happy ending, of sorts.

Ben Affleck (specifically from BVS): I liked the power he displayed on screen. He really dominated his opponents physically (minus the killing aspect) and you could really sense his veteran status. He oozed out confidence. His suit is my favorite, except for the cowl - chin seems too round from certain angles (not really his fault). I enjoyed his relationship with Alfred and the visible frustration that Alfred voices about the lifestyle and choices that he has made for the last couple decades. Really felt the history of their relationship. His reputation in Gotham was really well portrayed - still a legendary type figure, but known widely that he exists. I love how they layered in more history like the desecrated Jason Todd suit and the burned down Wayne Manor and all the little conversational nods to rogues gallery like Penguin and Harvey Dent/Two Face. Wish we were going to find out more about that…

Bonus: I actually enjoy Bruce Greenwood the most as animated Batman. I wish we got him more. Really love Under the Red HoodI did grow up with Kevin Conroy, but can’t put my finger on exactly why I stand opposite of most who say he is there quintessential Batman voice.

OK, somebody at least give Val Kilmer a pity vote. At least Adam West has me and HubCityQuestion.

Heck, even George Clooney wasn’t really the main problem with Batman and Robin.

Affleck with Keaton a very close second. Affleck felt like he walked off a comic book page for me. Keaton was great; the nostalgia factor cannot be underestimated.