Who Is The Most Badass DC Female of All Time?

Echoing IgorSnowden Big Barda for sure

Supergirl. After taking on the lantern corp, becoming a lantern and overcoming it. Probably the greatest story ever told for a female character that no one really knows about.

There’s only one correct answer to this question:

The deadliest woman in the world.

The only human being who can humble Batman through martial skill alone.

The one person who the League of Assassins only speaks of in terrified whispers.

The mother of Cassandra Cain, the greatest of all Bats.

And the only person who could ever get The Question to get his damn act together. By killing him.

There has never been a greater, more fearsome warrior on this Earth, and there never will be.

Bow down before The One Who Is All.

She lost her whole world as a child, everything she grew up with, everything she knew, and was sent alone to a world that doesn’t accept her. Whether it’s her cousin who stows her away in an orphanage, a batman who doesn’t trust her and amazons who kidnap her, or russians and scientists who go after her, she always ends up the brightest beacon of hope that cares for everyone.

Not only is she badass enough to go up against the antimonitor and beat him, willing to give her life to protect others, but she would do so again if needed, even if no one ever remembers she ever existed.

One worldkiller? That’s nothing for the girl of steel who takes on five of them. She would sit in empty space alone for 50 years if it meant saving one boys life. You say it’s impossible to take off a red lantern ring? Not for the most badass maiden of might.

Is the world lost to darkness? Has Superman lost his way, or has Lex mindwiped everyone but a few rebels? Has the nuclear winter covered the earth? Has Lex turned the man of steel into a baby battery? Are the only heroes left on earth flawed genetic clones?

One thing will be true - Kara will guide the way to the light again. 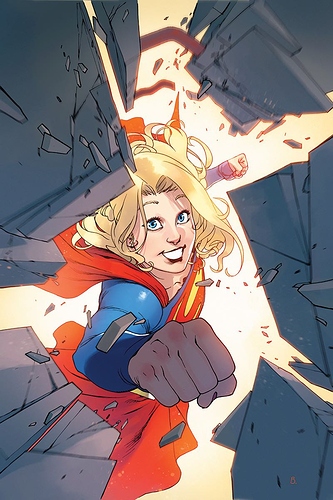 I am quite partial to Catwoman.
It’s those kitty-kat wiiilllles!
purrs
They’re a weapon in themselves.

Helena Wayne, Huntress. from Earth 2, who has a 2011 mini series here, prequel to Title Worlds Finest, set on main Earth.

Daughter of Batman Bruce Wayne and Cat woman , Selina Kyle. Father taught her swimming by throwing her out of plane.

Of course, PG is pretty bad ads herself.

Together they were unstoppable.

I take it back, Maxima used to be badass. @The Question is right, Lady Shiva

In agreement on Supergirl. More evidence.

Many new versions of Kara Zor-El have been introduced into comics. But before this happened, the Pre-Crisis Kara actually paid a visit on Boston Brand, the ghost who calls himself Deadman, during what would have otherwise been a gloomy Christmas.

In the DC Comics Christmas Special story “Should Auld Acquaintance Be Forgot”, Boston is lamenting the fact that he does a lot of good deeds and fights for justice but since he’s a ghost no one gets to see him in action and few people (aside from sorcerers and guys like Batman) even know he exists.

At this point, a blonde woman says, “Is that why you do it? For rewards?”

Deadman is shocked by the girl’s ability to see him and asks if she’s magical.

“No,” she says, “magic and I have never been boon companions, I’m afraid.” (Supergirl and Superman are vulnerable to magic, wink, chuckle).

After a bit of chit-chat, Boston explains that it isn’t so much about glory as recognition. “I was a performer, you know? … The sound of applause … I soared …Then suddenly, it’s gone. Forever. You are playing to an empty tent …”

“No, you’re only human. You are still human, Boston. Don’t be ashamed of it.”

As the girl leaves, Boston asks for her name.

She simply turns and says, “My name is Kara. Though I doubt that’ll mean anything to you.”

That’s a tough one. I wanna say Diana (for obvious reasons), but she does have a large advantage with her powers. So I’ll say Barbara Gordon, because she proved herself to be strong not just physically, but mentally by facing something awful and coming away stronger, and finding a way to be a hero when her body failed her. So while she might not be the best fighter, one could easily argue she’s the most resilient. Not to mention there was a time when she was a database of information for the majority of the DC superhero community. Even Superman and Batman needed her at times.

Death. Death is literally a woman and she is totally badass.