Who is the Joker?!

I wanted to make this for fun though, but I really want to know, what do other people about the Joker and his identity? I listed some people who probably might be the Joker, and you will answer to them!

All and none of the above. There is no one true Joker origin story.

Actually, I have a whole book of Joker origin stories I’d like to write someday. I just can’t share it here in case I ever want to use them.

I will share the working title, though… Stop Me If You Heard This One.

Like I said, a whole book. I just can’t share it for legal reasons. If you want to work in comics, don’t give away your ideas for free.

I just wanted to know a little bit of what you have in mind, but I understand.

This is also how I think of the Joker. I like how he should never really have an origin story. And even if we get it, it should be from his point of view, which is unreliable, so we have no idea if it is true or not.

Though, I am partial to the gangster who fell into a vat of chemicals version. It’s done the most, but sometimes it just feel like it fits the Joker right. I will say I have never cared for the ‘comedian who failed and somehow ended up as the Joker’ version.

Wrong, give away your bad ideas for free to sabotage the competition.

I think the appeal is that it is an unorthodox origin. Normally origins for great villains try to make them tragic and focus on how they “used to be a sweet kid.” This origin is more he has always been evil with no redeeming qualities.

This is a great title, I could actually hear the Joker’s voice when I read it (I won’t say which one though, that’s for me to know and you to decide

We all are right because, we all play a part of his psychosis. Everyone who reads his antics helps fuel his supersane 4th wall breaking mind. Simply,he is the very worse of us and because he is fiction we can all pull up a front row seat to the greatest show in our minds.

The Joker is my manical neighbor. He’s seriously insane. He’s constantly working in his yard or his shed. His kids are grown, out of the house, and seemingly, well-adjusted. A month ago, his wife baked some muffins as a gift for my family… just for the hell of it! (They weren’t that good, but I mean, the WTF is that?!)

Whenever I see him, ugh! He waves and smiles. That smile… I mean, seriously. That freaking smile…

Between Jack Napier (Jack Nicholson Joker) who was the person who killed Batman’s parents in the Burton and Schumacher Batman Universe and was also originally going to be the father of this universe’s Harley Quinn who wants to avenge her father’s death at the end of Batman 1989 against maybe Micheal Keaton Batman and Schumacher’s Robin along with Scarecrow, but was cut, next to Tim Burton’s Superman Lives with Nicholas Cage as the Man of Steel, but lucky to get to voice him in Teen Titans Go! To the Movies, because of the failure and disaster of a Batman movie, Batman and Robin with Uma Thurman as Poison Ivy, comic-accurate Bane, and even, the most trippy casting ever, Arnold Schwarzenegger as Mr. Freeze, and Alicia Silverstone as Batgirl with a different backstory than Barbara Gordon Batgirl, the Heath Ledger Joker (Dark Knight Trilogy), a terrorist who wants to work with Batman, even though he’s a psycho, the Jared Leto Joker (DCEU, Suicide Squad, beginning of Harley Quinn:Birds of Prey, and the much anticipated miniseries, the Snyder Cut of Justice League, decent interesting Joker), a messed-up gangster who can really get stuff his own way, even in his trusted allies, especially Margot Robbie Harley Quinn (one of my most favorite characters and actresses with actors, next to this universe’s Justice League, Shazam, the Birds of Prey, and even Suicide Squad both 2016 and even the upcoming 2021) and finally, Arthur Fleck (Joaquin Phoenix Joker), a failed comedian (fired from his job as a party clown, but still has the makeup) with a condition that makes him laugh maniacally, who was outcasted, bullied, and abused by the society of Gotham, which makes him snap and turn against Gotham, the world, his own mother, TV host, Murray Franklin, and even the Waynes, especially young Bruce, before he was Batman, which might be obvious if the Joker and Batman are both brothers, which explains their obvious relationship to each other, especially The LEGO Batman Movie, where they acted as frenemies or like brothers with sibling rivalry, even though through their source material in the DC comics, that they hate each other as archenemies, because Thomas, Bruce’s father had an affair with his mother, Penny Fleck, which convinces him that he is his dad and Bruce is his younger half-brother, even though he doesn’t know that, until he grows up to be Batman and fights with Arthur who is now the Joker. 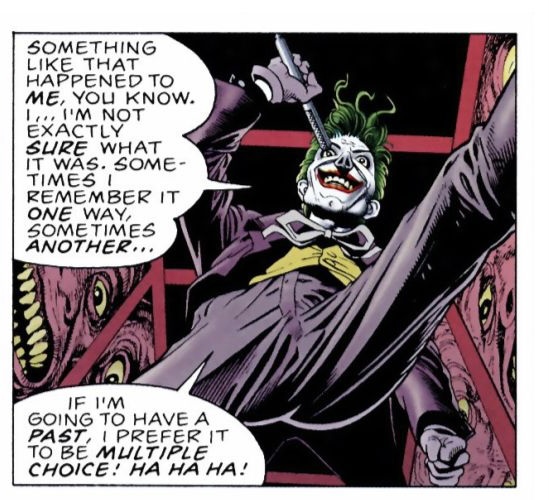 This has always been my preferred explanation.

Jack Napier is the general identity of the joker in at least 3 continuities : batman white knight, batman (1989 movie) and Gotham high. then there is the 3 joker arch story which has 3 jokers the first being the comedian however this continuity takes place with the absence of Harley quins introduction. then there is Arthur =). however who is the actual joker in the other continuities is a big old mystery

I really like the theory that The Joker in The Dark Knight is a messed up former special ops soldier turned criminal.

But on a more meta level in reference to the comics, he’s an overused edgelord villain that needs some of his old gimmicks back, or a lengthy vacation.