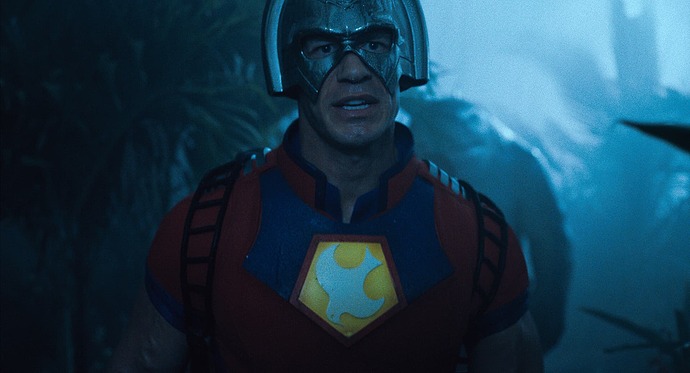 What happens when you combine a strong sense of pacifism with a heavy armory? You wind up with Peacemaker, the gun-toting “hero” who loves peace so much that he’s willing to kill for it. This might sound like an unusual description for a so-called good guy, but Peacemaker isn’t your typical crimefighter, as you’re about to discover. The world’s biggest pacifist (his words, not mine) will be making his big screen debut this summer in James Gunn’s The Suicide Squad where he’ll be brought to life by the iconic John Cena. And regardless of whether he survives the film or not, it won’t be the last time you see him because Cena will be reprising the role next year in a Peacemaker spinoff series on
HBO Max. It’s guaranteed to be crass and violent—you know, the way most pacifist-based shows are.

If your only exposure to Peacemaker has been The Suicide Squad’s trailers, then you might be curious about who he is and what kind of hero proudly talks about eating…cough…“a beachful of dicks.” Well, if that’s you, then read on. It’s time to meet the ‘Maker.

Comic book readers were first introduced to Peacemaker in Fightin’ 5 #40, published in 1966 by Charlton Comics. Christopher Smith was an envoy to the Geneva Arms Conference where he used his skills as a diplomat to work for world peace. Smith was constantly describing himself as a pacifist and talking about how much he loved peace—even though he kept a heavily stocked armory in his chateau.

That chateau was known as the Peace Palace, which seems like an appropriate name for a base filled with weapons. Smith’s thought balloons at the time revealed that he had sworn never to use the weapons, but it does make one wonder why he was collecting them in the first place. Maybe he was trying to take them out of circulation?

Smith’s occupation as a peace envoy put him face to face with international threats and he soon realized that the only way to protect peace was to fight for it. “I detest violence, but because of my inadequacy, thousands of innocent people may die! I must do what I have sworn never to do,” he said.

To learn more about Peacemaker and his violent, pacifistic nature, head on over to DC Comics!

Are you a fan of Peacemaker? Let us know in the comments below!

Based on name alone I would guess the hippie guy on the team who is against violence and all about peace and love.

He would be the strong man creating the good peaceful times.

The Champ Is Here!!!

Want some, come and get some!

And my favorite, You Can’t See Me!

Can’t wait to see him as The Peacemaker, for a villian with a dorky helmet, he looks like a hero.

I suspect I’m going to have a hard time not seeing Peacemaker and Ewan O’Hara as the same character.

Not sure if anyone here is into psychometrics, but my archetype is known as The Peacemaker (2-7-9), so I get it.